PJM’s annual capacity auction, the results of which were posted on May 23, procured 165,109 MW for the period between June 1, 2020, and May 31, 2021, giving the regional transmission organization (RTO) that runs the world’s largest competitive power market a 23.3% reserve margin to meet consumer needs three years from now.

The 2020/2021 base residual auction produced a price of $76.53/MW-day for most resources in PJM’s footprint, though prices were higher in some areas owing to transmission constraints and retiring generators. Prices were lower than expected, falling from last year’s auction, owing to changes in supply and demand, PJM said. 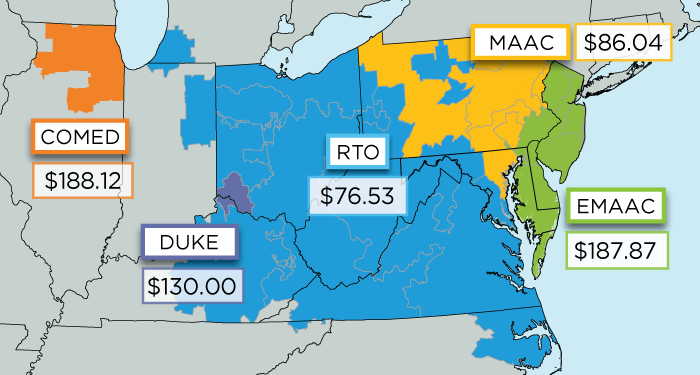 According to Moody’s Investors Service, the PJM auction results reflect a system price decline of 23%, which could drive already financially crippled coal generators to retire more plants. But over the long term, lower prices could also “pressure margins for all other generators, including other gas-fired plants,” said Toby Shea, a vice president and senior credit officer at Moody’s on May 24.

Earlier this month, the credit ratings agency warned that the flood of cheap gas driving massive construction of new natural gas power generation capacity could wreak havoc in PJM. The price decline, according to Moody’s, will most affect Talen Energy Supply, FIrstEnergy Solutions, and GenOn Energy.

Among major generators that did not clear the auction are Exelon’s Three Mile Island and Quad Cities nuclear plants. The single-unit 837-MW Three Mile Island plant in central Pennsylvania, which Exelon said hasn’t been profitable in five years, has failed to clear the past three PJM base residual auctions. Exelon noted on May 24 that the plant “remains economically challenged as a result of continued low wholesale power prices and the lack of federal or Pennsylvania energy policies that value zero-emissions nuclear energy.”

The company added that it has been working with stakeholders on options for the continued operation of Three Mile Island. Exelon has successfully prodded state legislators in New York and Illinois to enact policies that it says “fairly compensate” nuclear and renewables for their environmental attributes.

Yet, while all its other nuclear plants (with the exception of Oyster Creek, which is slated to shut down in 2019) cleared the PJM auction, Quad Cities’ future operation still hangs in the balance. While Illinois’ Future Energy Jobs Act (FEJA) offers a zero-emissions credit (ZEC) to nuclear generators, Quad Cities “has not been selected to receive ZECs under the FEJA program to date,” noted Joe Dominguez, Exelon’s executive vice president of Government and Regulatory Affairs and Public Policy in a May 24 statement.

Gas Emerges as the Big Winner

The grid operator said that the auction attracted a record amount of competitive resources, even while it implemented, for the first time, new rules in which all resources had to meet capacity performance requirements. The new rules require all resources must meet strict standards, committing to perform when needed, or face steep fines. To meet that standard, generators have been working to ensure firm fuel supplies or improve equipment efficiency, PJM said.

A total of 2,823.8 MW of new generation capacity (90% of what was offered into the auction) cleared it, and the bulk of it—2,350 MW—was new combined cycle gas-fired generation. The remainder, 434.5 MW, was composed of uprates to existing generation units.

Notably, 7,820.4 MW of demand resource participation also cleared, though PJM noted that total demand resources offered into the auction fell nearly 16.7% compared to its last auction. About 1,710.2 MW of projects that involve the installations of more efficient devices, equipment, or systems, and which demonstrate a continuous reduction in electric energy consumption, also cleared the auction.

Additionally, under new rules approved by the Federal Energy Regulatory Commission in March, 398 MW of seasonal capacity—resources available in one season only—cleared “in an aggregated manner” to form a year-round resource, PJM said. “Wind generators, whose capacity is greater in the winter, combined through the auction clearing mechanism with demand response and solar resources, whose capacity is greater in the summer,” it said.

All 887.7 MW of wind resources offered into the auction cleared it, though that number is much smaller than the 969 MW offered in the last auction. “The capacity factor applied to wind resources is typically 13%, meaning that for every 100 MW of wind energy, 13 MW are eligible to meet capacity requirements,” PJM explained. “The 887.7 MW of cleared wind capacity translates to approximately 6,828.5 MW of wind energy nameplate capability that is expected to be available in the 2020/2021 Delivery Year.”

All 125.3 MW of solar offered into the auction also cleared it, but that number fell drastically from the 335 MW offered last year. PJM applies a capacity factor of 38% to solar, which translates to about 329.7 MW of nameplate solar energy capability.

According to Jennifer Chen, an expert from environmental group National Resources Defense Council, market bids offering wind, solar, landfill gas, and river-based hydroelectric power fell by 3,400 MW, and demand response offers decreased by 2,085 MW this year. The drastic reductions follow “unsurprisingly from PJM fully implementing its new rules that discriminate against clean energy resources in favor of gas and nuclear power plants,” she said. The new capacity performance rules, which require all capacity resources to be available to perform whenever called upon, prefer annual resources over seasonal resources, and have been challenged in federal court, she noted.

“While all capacity resources must commit to annual periods, summer-only and winter-only resources can pair to form annual resources. This idea sounds good in theory, but it doesn’t account for the fact that electricity demand in PJM is highly seasonal—electricity demand during an extreme summer is about 26,000 megawatts higher than the demand during an extreme winter. It also doesn’t account for the fact that there are many more summer resources in PJM that could cost-effectively and reliably satisfy PJM’s higher summer demand.”

This year’s auction was also the first to include participation from “price responsive” demand resources, which are essentially power consumers who voluntarily curtail their electricity use in response to wholesale power price signals.

When these consumers use less power during hours when the wholesale price is high, for example, then the price responsive demand mechanism allows the cost of serving them to go down for suppliers. But compared to PJM’s existing demand response opportunities, rather than being directly paid for reductions, consumers save money on bills by cutting or shifting their power use.