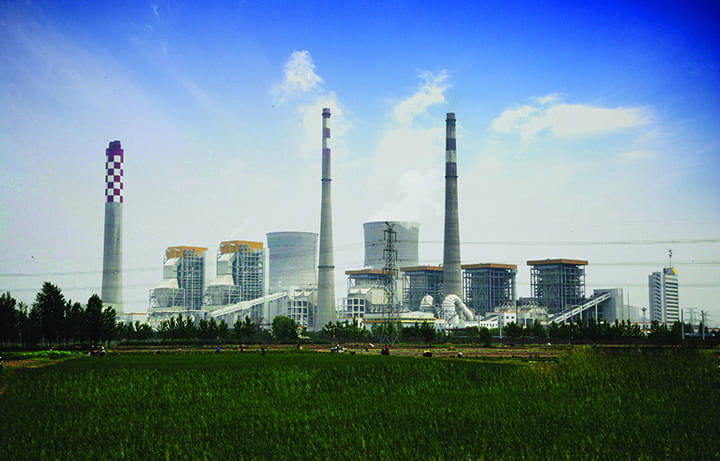 A remarkable retrofit at Xuzhou Unit 3 boosted the 320-MW subcritical coal unit’s efficiency to beyond 43.56%—higher than all existing Chinese supercritical units, and even many ultrasupercritical units. The groundbreaking demonstration is a POWER 2020 Top Plant award winner because it offers crucial hope and new purpose for subcritical units around the world.

In April 2017, engineers from Shanghai Shenergy Power Technology sat together contemplating how they would execute a formidable task. Owing partly to their success at boosting the annual average net efficiency at Shanghai Waigaoqiao 3, an ultrasupercritical (USC) unit (and a 2015 POWER Top Plant), to a world-class 44.5%, Hong Kong–based power generation giant China Resources Power had invited the technology arm of Shanghai government–owned Shenergy Group to conduct a high-temperature retrofit at one of four units at the 1.2-GW Xuzhou China Resources Power Plant in Jiangsu province.

Though it featured some of China Resources’s very first coal units, some units at the Xuzhou plant, like the June 2004–commissioned Unit 3, were relatively young. But China Resources was concerned the efficiency of these and its other subcritical units wouldn’t meet the 39.6% average unit net efficiency (UNE) level (net lower heating value basis) mandated by the Chinese government in 2014, which would force a vast slice of the company’s thermal generation portfolio to close as required by 2020.

As Li Li, a Shanghai Shenergy Power Technology engineer, explained to POWER in June, China had already made sizable leaps to modernize its coal fleet at the time. Yet, while the nation had installed more than 100 1-GW USC units, it still had a substantial 350-GW subcritical fleet, and most—more than 880 units—were small 300-MW designs.

The outlook for the subcritical fleet was dismal, Li said. Considering the fact that the typical annual average net efficiency level of subcritical units was about 37%—some were even lower than 35%—achieving the mandated 39.6% UNE target seemed overly ambitious. Though the large 3% UNE gap was challenging, shuttering those small, still relatively young units would have been “a great waste of investment and resources,” he said.

Ultimately, the team chose to conduct a high-temperature retrofit customized to Xuzhou 3, a 320-MW subcritical unit that best resembled many Chinese-built units in age and equipment. Before the retrofit, Xuzhou 3 contained a two-path drum boiler made by Dongfang Boiler and a turbine made by Shanghai Turbine. But although the unit’s high-pressure-intermediate-pressure (HP-IP) turbine flow paths had been modified once before in 2012, the efficiency benefits had degraded over time, and the unit’s UNE efficiency under turbine heat rate acceptance conditions was about 38.6%, according to a 2016 performance test. The retrofit project’s requirements clearly called for reducing the coal consumption rate of the unit from 318 grams/kWh to 287 grams/kWh when it was running loads at 100%. That meant raising its efficiency to 42.8%—a level that surpassed all existing supercritical units and several USC units.

However, Shenergy’s engineers recognized that their task also required a long-term vision, Li said. For one, the demonstration needed to show the technology could be widely applicable, so the retrofit would need to show good return on investment (ROI). Essentially, “The solution needed to substantially increase the efficiency in an economical way so that it would be accepted by the market,” he explained. And as significantly, it would need to show exemplary performance that could be sustained “so unit owners wouldn’t need to be concerned about future operation efficiency.” Finally, the solution also needed a “low technical risk” profile, which means it needed to be based on “mature materials and equipment to reduce the risk and ensure safety,” he said.

These parameters helped the team rule out several existing solutions. The typical modification of turbine flow paths, a common retrofit solution usually recommended by turbine manufacturers, would have yielded an efficiency improvement of only 1.2%, engineers determined. Upgrading to a “double-reheat” unit, meanwhile, would have required a complete dismantling and rebuilding of the boiler, as well as replacing the feedwater systems and generator systems, and though the efficiency gains would have been valuable, it was too costly to consider, Li said. 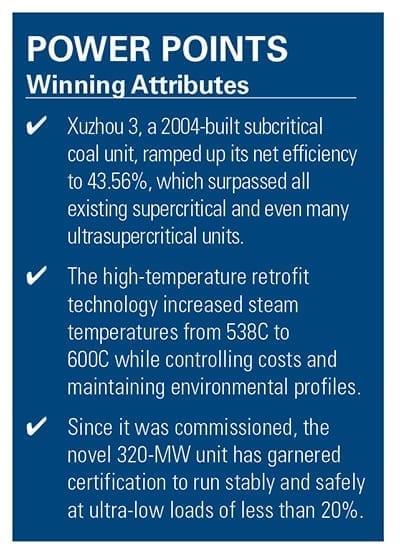 The retrofit solution the engineers ultimately drew up for Xuzhou 3 was based on an invention developed over 11 years by Prof. Feng Weizhong, who is also general manager of Shenergy Power Technology. Weizhong calls the solution, “High-Temperature Comprehensive Upgrading Retrofit of Subcritical Unit.” It included the the steps that follow.

Improving Turbine Efficiency. Determining that ramping up efficiencies would require increasing steam temperatures from 538C (1,000F) to 600C (1,112F), while keeping the main steam pressure unchanged, Shenergy recognized the unit’s turbine efficiencies would also need to be ramped up dramatically, so it collaborated with turbine heavyweights Siemens and GE Power to develop a retrofit solution. The customized turbine reaps benefits from an efficiency improvement of about 7%, which was achieved via higher feedwater temperature, a better flow path, and higher exhaust steam quality, Li said. The 600C subcritical turbine design also showed that the heat rate could be as low as 7,500 kilojoules/kWh (7,109 Btu/kWh)—much lower than that of a supercritical one.

Ramping Up Boiler Temperatures. Achieving a 600C temperature for the 2004-built subcritical drum boiler was a more formidable challenge, Li said. “The drum is the boundary of water and steam; therefore, the main steam temperature can’t be as flexibly adjusted as a once-through boiler,” he explained. Engineers came up with an innovative and economical solution that involved retrofitting the boilers heating surfaces (Figure 1), and installing a new “radiation superheater.”

Replacing Piping. To accommodate efficiency improvements in the turbine and the boiler, this part involved replacements with P92 piping, Super 304H boiler tubing, and other high-temperature alloys that are commonly used in USC plants.

Applying Energy Saving Technologies. To further improve efficiencies, engineers also added a set of Shenergy-developed and patented energy-saving technologies, including efforts to recover heat from flue gas, “generalized regeneration” technologies that reduce the turbine exhaust loss, and improvements to the air preheater. These technologies also essentially reduce power consumption of existing auxiliary equipment such as boiler fans and turbine pumps. “The evidence is performance related,” Li said. “They actually reduced power consumption by 10%,” which pays off in long-term efficiency gains, he said.

Despite the wide scope of these retrofits, many of them requiring first-of-their-kind applications and rigorous testing, Shenergy and China Resources completed physical construction of the project at the end of July 2019—within a remarkable six months. So far, the combined effect of these improvements on the total thermal cycle for Xuzhou 3 are paying off in a big way, Li said, and Shenergy has shown that if applied to a bigger plant, such as a 600-MW unit, efficiency levels could be improved further by about 0.7%.

“Compared with USC units, where the typical parameters are about 26 Megapascal (MPa, 3,771 psia) and 600C, our subcritical unit has 16.7 MPa (972 psia) and 600C. So, we just have a lower pressure—which we could not change because it would ramp up the cost—but the influence of the pressure sensitivity is not that large, and we can compensate this gap with our energy-saving technologies,” he said.

The total retrofit project, meanwhile, cost about 350 million RMB, or $50 million, which is less than a third of the cost to build a new unit in China, Li said. That’s also important because getting the government’s approval to build larger new supercritical or USC coal units in China is currently difficult, owing to climate and overcapacity concerns. “The government actually encourages subcritical retrofits for efficiency gains,” but before the Xuzhou 3 demonstration, previous efforts had proven costly and were limited in performance, Li noted.

Since the project was commissioned, Xuzhou 3 has also found a new purpose—as a flexible, load-following generator. “Flexibility wasn’t a requirement in the project contract, but Shenergy still took it into its design,” Li said. “It turns out that load can be as low as 19%, and the boiler combustion will still be stable and the SCR will still operate normally.” A three-stage test witnessed by a local power grid authority institute in December confirmed the unit can operate safely at a load of 19% for more than four hours. That achievement garnered the unique subcritical unit one of China’s first certifications under “deep load regulation.”

That’s crucial because it opens up a new avenue for subcritical coal utilization as China tries to balance its growing share of intermittent renewable power, Li said. It’s also a big bonus that could encourage market uptake of the “very promising and economic solution for all the subcritical units in the world to dramatically increase the unit efficiency,” he said. ■