Olkiluoto 3, the world’s first EPR whose construction in Finland has been plagued by major delays, in September reached a significant milestone as its 200 – metric ton, 47-meter-diameter steel dome was hoisted into position 44 meters above the ground (Figure 1). The massive concreting process for the internal structures of the reactor containment have also now been completed, all large components have been installed in the turbine building, installation of piping and electrical equipment is nearing completion, and erection of piping and other installation work will now start on a large scale, Finnish utility Teollisuuden Voima Oyj (TVO) said in October. 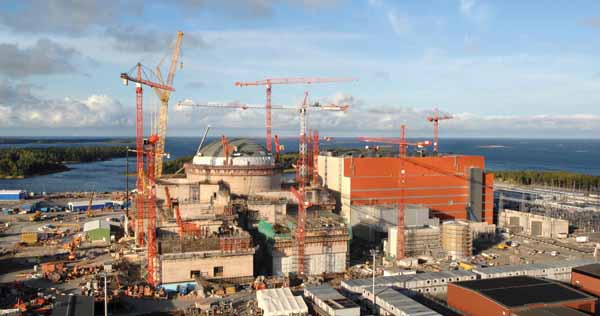 1.    Raising the roof. The world’s first EPR, Olkiluoto 3, in September reached a major milestone with installation of the reactor dome. Two cranes hoisted the steel component weighing 200 metric tons and measuring almost 47 meters across and lowered it into place 44 meters above the ground. The inner section of the reactor building is now completely covered, and to seal it, the dome will be welded around its circumference and covered with 7,000 metric tons of concrete. The project, expected to come online in 2012, is three years behind schedule, plagued by planning and material delays. Courtesy: AREVA

The utility expects that the first systems will be ready for the commissioning phase before the end of the year. The plant is now expected to come online in 2012 — three years behind schedule. The delays — blamed largely on persistent issues with faulty materials and planning since construction began in 2005 — are said to have cost builder AREVA an estimated €2.3 billion. In September, having publicly lambasted TVO for being slow to fulfill contractual commitments, the French state-owned nuclear engineering firm said it would only compete the plant’s construction if the utility agreed to the company’s contract ammendments.

"AREVA has sent proposals to TVO in order to get back to methods of execution that are in line with usual practices for major projects," said AREVA CEO Anne Lauvergeon. "We will only commence the final phases of the works when TVO has agreed upon the proposals that have been made or issued contract amendments that provide for the requested modifications."

But Olkiluoto is not the only EPR project under way to have seen costly delays. The evolutionary 1,600-MW pressurized water reactor is also being built at Flamanville in France, and two units — Taishan 1 and 2 — are planned for China. Industry sources say that costs for the Flamanville project, spearheaded by French energy giant Electricité de France (EDF), had risen from €3.3 billion as originally stated to €4 billion by December 2008. Construction of the project, begun in July 2006, was also expected to last only 54 months. EDF insisted in June this year, however, that the project was on time and on schedule.

AREVA in late August, meanwhile, postponed pouring concrete for the Taishan EPR project until mid-September — a task not performed as of Oct. 1.

How the delays will affect several planned EPRs is not clear. EDF and E.ON have opted for EPR technology in the framework of the UK’s nuclear new build program. The EPR certification process is also under way in the U.S., where several utilities have opted to build a total of seven EPRs at proposed nuclear power plants. AREVA, in a partnership with GDF-Suez and Total, is also proposing the EPR in the United Arab Emirates, and it has inked a commercial agreement with India’s nuclear monopoly, Nuclear Power Corp. of India Ltd. for construction of at least two EPRs in Jaitapur, Maharashtra state. Most recently, Italy’s ENEL signed a joint venture with EDF for the construction of four EPRs split across three power plants.