On Sept. 9, Sweden’s Vattenfall inaugurated the world’s first demonstration plant that connects carbon capture and storage (CCS) technology in a full-chain working system. The inauguration of the pilot plant at Schwarze Pumpe in Germany, which underwent 10 years of testing, was a milestone that marked its move from the laboratory to reality, Vattenfall said.

Vattenfall spent two and a half years and €70 million ($100.5 million) building the plant alongside the 1,600-MW coal-fired Schwarze Pumpe power plant in north Germany (Figure 5). The pilot plant, which will use oxyfuel technology to capture the carbon dioxide (CO 2), is expected to consume 12 MW of electricity and 30 MW equivalent of thermal power. 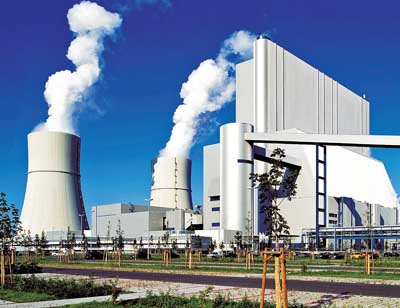 Lignite and hard coal will be combusted in a mixture of oxygen and recirculated CO 2, which also contains water vapor. The flue gas will then be treated to remove sulfur oxides and other contaminants. Then the water will be condensed and the concentrated CO 2 will be compressed into a liquid.

The demonstration will capture up to 100,000 tons of CO 2, compress it, and sequester it about 3,000 meters (9,842 feet) underground at a depleted gas field in Altmark, some 200 km (125 miles) from the site. On Sept. 9, as well as inaugurating the plant, Vattenfall presented specially designed vehicles that would transport liquefied CO 2. These trucks will commence operation when construction of the injection facility in Altmark is complete — likely in spring 2009.

The initial pilot program will run for three years. Thereafter, Vattenfall plans to make the plant available for other tests and hopes it will be in operation for at least 10 years.

The pilot plant is not only an important step for pushing oxyfuel technology forward, Vattenfall said; it is also a crucial component for securing the future of coal mining and electricity generation in the Lusatia region, where Vattenfall is one of the most important companies.

Vattenfall relies heavily on coal and lignite to generate power in many of its major markets and is keen to cut emissions. Earlier in September, it had called for government subsidies to help kick-start CCS, saying much-needed investment in low-carbon power would not happen without substantial European Union support.

To help it decide whether the technology was economically feasible in the long run, Vattenfall contributed data and paid for a study by management consultants McKinsey & Co. to study the economic feasibility of CCS. That study concluded that carbon capture and storage may be expensive, but it could ultimately pay for itself by 2030.

The report, titled "Carbon Capture & Storage: Assessing the Economics," said the technology could help Europe become more self-sufficient because it could rely on burning its own coal reserves instead of importing natural gas from Russia and elsewhere. Additionally, the abatement would be cost-effective for power companies in Europe because it would be at the same price level as pollution permits sold through the EU’s carbon trading program.

The report calculated that the extra cost of carbon capture would be €30 ($44) to €45 ($66) per metric ton of CO 2 by 2030 if 80 to 120 commercial-scale CCS projects were installed in Europe. But the economies of scale would be possible only if that many projects were developed. The first commercial projects would also need to begin soon after the demonstration phase. If these projects were delayed by permits or other uncertainties, "CCS could struggle to reach large-scale in 2030," the report said.

"The implication is that early attention must be given to the prerequisites for commercial roll-out beyond the first 10 – 15 projects — including cluster development, infrastructure networks, permits, industry preparations, and possible business models and commercial approaches to the next stage of development," it said.

The report stressed that several issues need to be resolved first — specifically, regulatory issues (around storage liability and the legality of storage) and funding, which will be needed to support the demonstration project phase.