In the week following the president’s speech, the administration’s freshly unveiled Fiscal Year 2011 budget request for the Department of Energy highlighted a tripling of nuclear loan guarantees — $36 billion added to the $18.5 billion allotted by the Energy Policy Act of 2005 and $2 billion that was subsequently added for fuel cycle facilities. Energy Secretary Steven Chu went on record to say that the guarantees could support the construction of seven to 10 new reactors and promised that the first of two conditional offers would be made soon. And it was: With much fanfare, the president in mid-February announced conditional commitment for an $8.33 billion loan guarantee to Southern Co. for its expansion of Plant Vogtle in Georgia.

The budget also indicated the administration’s commitment to entirely withdraw the Yucca Mountain application from the Nuclear Regulatory Commission (NRC) — an effort that has cost some $9 billion since its inception in 1982. At the end of January, the DOE announced the formation of a Blue Ribbon commission, a 15-member body expected to provide, within two years, recommendations for developing a long-term platform to manage used nuclear fuel and nuclear waste. On March 3, the administration did in fact file a motion to withdraw the Yucca Mountain license application.

Despite the open question of what to do with nuclear waste, on March 8, Secretary Chu announced awards of approximately $40 million in total to two international teams led by Pittsburgh-based Westinghouse Electric Co. and San Diego – based General Atomics for conceptual design and planning work for the Next Generation Nuclear Plant (NGNP). The results of this work will help the administration determine whether to proceed with detailed efforts toward construction and demonstration of the NGNP. If successful, the NGNP Demonstration Project will demonstrate high-temperature gas-cooled reactor technology that will be capable of producing electricity as well as process heat for industrial applications and will be configured for low technical and safety risk with highly reliable operations.

U.S. Nuclear Plans in Reverse. Could these rapid-fire developments perk up the fading dream of a U.S. nuclear renaissance? It is too soon to tell, though momentum has been building in the opposite direction.

In January, for example, Progress Energy suspended plans for four new Florida reactors, after a state commission denied requests for electricity rate hikes. Last August, the Tennessee Valley Authority scrapped plans for three new reactors in Alabama and delayed a fourth by at least four years. Reactors have also been canceled in Texas, Missouri, and Idaho, and applications for combined construction and operation licenses have been suspended in Mississippi, Louisiana, and New York. Of the 26 new applications submitted to the NRC since 2007, nine have been canceled or suspended indefinitely, and 10 more have been delayed by one to five years.

Also, the White House has proposed barring the DOE from research on fast breeder reactors that could recycle our repository of spent nuclear fuel. Energy Daily, a sister publication of POWER, reported on January 15 that the plan drew "protests from Energy Secretary Steven Chu that such prohibitions will have broad adverse effects, including hurting the U.S. nuclear industry’s renaissance; crimping U.S. ability to influence other countries’ fast reactor designs to address proliferation concerns; and taking away nuclear waste disposal options that might be considered by the administration’s planned blue-ribbon panel on alternatives to the Yucca Mountain repository." In a letter from Chu to the Office of Management and Budget dated Dec. 22, Chu said that he "strongly disagree[s] with the policy direction [proposed by OMB] concerning allowable nuclear energy R&D activities."

Other Nations Are Lapping the U.S. Meanwhile, a global nuclear revival is well under way. From China to Brazil, more than 50 reactors are being built around the world, another 130 or more are planned to come online during the next 10 years, and more than 200 are further back in the pipeline, according to the World Nuclear Association. Several countries are quietly, but steadily, pushing agendas to make nuclear power a major part of their future energy supplies.

India Betting on Local Talent. India is a prime example. That country’s efforts to keep up with its frenzied economic development include plans to build up to 20,000 MW in new nuclear capacity by 2020, and 63,000 MW by 2032. Those plans rely largely on indigenous designs; the country with meager uranium reserves has been pressing on with a unique long-term program that pushes for research and development of nuclear reactors using all three main fissionable materials: uranium-235, plutonium, and uranium-233. The three-pronged program, developed largely during the country’s almost 30-year-long isolation from international nuclear trade, also factors in India’s abundant reserves of thorium, which constitute 25% of the world’s total reserves.

Five reactors, of both indigenous and foreign design, are under construction, including a 500-MW prototype fast breeder reactor. That project, which is being built at Kalpakkam, near Chennai, in Tamil Nadu state, was expected to come online at the end of 2010, though it could be delayed a couple of months or up to a year, an unnamed source told the Business Standard in February. The delays are being blamed on the lengthy commissioning of equipment that is "being made for the first time," the source said. The main vessel was recently installed at the project, which is being spearheaded by federal research enterprise Bharatiya Nabhikiya Vidyut Nigam (Figure 1). 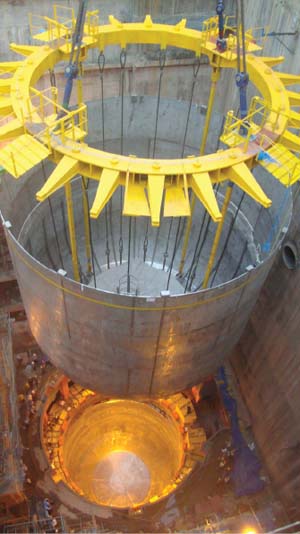 1. Fast and furious. This 500-MW prototype fast breeder reactor is being built at Kalpakkam, in Tamil Nadu state, by federal enterprises Bharatiya Nabhikiya Vidyut Nigam (BHAVINI), Indira Gandhi Centre for Atomic Research, and the Nuclear Power Corp. of India. On Dec. 5, 2009, the stainless steel main vessel was lowered into the safety vessel. The main vessel—12.9 meters in diameter, 12.94 meters high, and weighing 206 metric tons—will house the third and smallest inner vessel and associated components. The project has reportedly been delayed; it will now come online in 2011. Courtesy: BHAVINI

Meanwhile, the country keeps rolling out new plants. This February, for example, state-owned Nuclear Power Corp. of India Ltd. put into commercial operation a fifth unit at the Rajasthan Atomic Power Project, a 202-MW pressurized heavy water reactor (PHWR). A sixth unit at that plant, also a 202-MW PHWR, is currently undergoing testing, with commissioning expected this March (after this issue goes to press). The two reactors will bring the total number of operating nuclear reactors in India to 19 for a combined generating capacity of some 4,700 MW.

Will South Korea Come in Third? South Korea is also positioning itself in the nuclear spotlight. Its most recent unit, Ulchin 6, came online in 2005, and the country hopes to provide 45% of its electricity from nuclear power by 2015. But it is also looking beyond its borders to build new plants.

Korea Electric Power Corp. (KEPCO) is in talks with multiple countries to explore exporting its nuclear plant construction capabilities. In March it signed a cooperative protocol to to establish a nuclear power plant in the northern Turkish province of Sinop. The World Nuclear Organization notes that, following the sale of four nuclear reactors to the United Arab Emirates, the South Korean Ministry of Knowledge Economy declared in January 2010 that it hoped to export 80 nuclear power reactors worth $400 billion by 2030, in the course of becoming the world’s third-largest supplier of such technology, with a 20% share of the world market, behind the U.S. and France or Russia.

One new customer could be the Philippines. In light of a power crisis in Mindanao (the second-largest of the islands) early this year caused by lack of hydro resources, several parties are suggesting that the country protect itself against overreliance on hydropower by considering other energy sources, including nuclear.

The Manila Times reported that President Gloria Arroyo has expressed interest in acquiring two reactors from South Korea. On Mar. 2 a letter from President Arroyo to President Lee Myung-bak asked South Korea to sign a deal to sell two partially built Korean-built reactors, originally intended for North Korea, to the Philippines rather than selling the parts piecemeal. Presidential candidate Gilbert Teodoro Jr. has pointed out that Filipinos used to operate nuclear plants in Korea and Japan, so they should be able to do so in their own country.