If there is one unequivocal sign of the seismic shift in the natural gas market, it is in how dramatically the role of liquefied natural gas (LNG) has changed in less than a decade.

As recently as 2005, the Energy Information Administration (EIA) was predicting U.S. LNG imports would reach 17.4 billion cubic feet (Bcf) per day by 2025. The shift since then has been nothing short of breathtaking: The EIA’s 2012 Annual Energy Outlook now projects the U.S. to become a net LNG exporter by 2016.

The Department of Energy (DOE) is currently considering nine applications to export domestically produced LNG, totaling 14.0 Bcf/d of capacity. Eight of them would involve construction of large-scale liquefaction terminals (Figure 1). 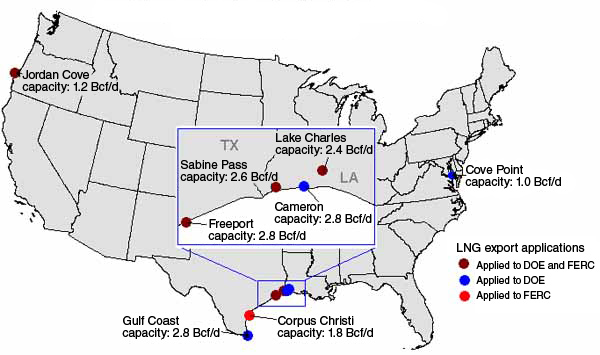 1. As many as eight LNG export terminals may come online in the U.S. in the next few years. Source: EIA.
[end art]

On April 16, the Federal Energy Regulatory Commission (FERC) approved the Sabine Pass liquefaction project in Cameron Parish, La., owned by Cheniere Energy Partners. The Sabine Pass export terminal will consist of up to four modular LNG trains, each with a nominal capacity of 4.5 million tons per year (mtpa), for a total of 2.6 Bcf/d. The project will be built by Bechtel and is expected to be constructed with each LNG train commencing operations approximately six to nine months after the previous train. Trains 1 and 2 are projected to come online in 2015 and 2016, respectively.

Customers are already lined up for Sabine Pass’s gas even though actual exports are years away. The operator, Sabine Liquefaction, has entered into four long-term delivery contracts for a total of 16.0 mtpa. The customers include BG Gulf Coast LNG, LLC (5.5 mtpa), Gas Natural Fenosa (3.5 mtpa), KOGAS (3.5 mtpa), and GAIL (India) Ltd. (3.5 mtpa).

Equity financing for the project was completed on May 15, as two funds controlled by the Blackstone investment group agreed to purchase a $1.5 billion interest in Cheniere. Arrangements for the remaining debt financing are currently under way; Cheniere announced that a $1.3 billion credit line for the facility was secured on May 29.

Exports of natural gas produced in the United States are restricted by the Natural Gas Act, and gas cannot be exported until the DOE issues an order finding that the exports are in the public interest.

"Public interest" is not defined, but the approach is bifurcated into two markets: those that have a free trade agreement (FTA) with the United States and those that do not. Where an FTA is in place, the law presumes that exports are in the public interest and FERC must approve the application. However, in practice, relatively few countries that import meaningful amounts of LNG have FTAs with the U.S. The main exception is South Korea; its FTA with the U.S. went into effect on March 15.

In addition, construction of an LNG liquefaction terminal requires approval from FERC. Four such projects, representing another 6.9 Bcf/d of capacity, are currently undergoing FERC review. These include three (Freeport, Texas; Lake Charles, La., and the Jordan Cove project in Coos Bay, Ore.—Figure 2) that have received approval for FTA country exports and a fourth (in Corpus Christi, Texas.) whose developers have not yet applied to the DOE for an export license but plan to do so this summer. 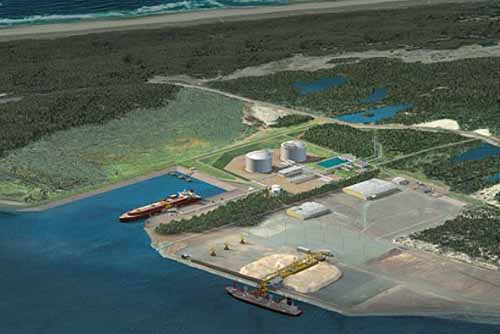 The history of the Jordan Cove project symbolizes much of the paradigm shift in the U.S. LNG market. First proposed in the early 2000s, it would have comprised a regasification terminal capable of receiving up to 1.0 Bcf/d and a 234-mile pipeline that would connect the project to the Williams Northwest pipeline to supply gas to California and other markets. The proposal generated opposition from environmental groups, the State of Oregon, and the National Marine Fisheries Service. Jordan Cove sought FERC approval for construction in late 2007, and the environmental impact statement was issued in May 2009 after months of protests and legal maneuvering. FERC approved the project in late 2009, drawing a raft of requests for rehearing from Jordan Cove’s opponents, but by then the economics underpinning the project had begun to shift.

Falling gas prices and surging domestic production made the terminal less attractive to investors. Last year another pipeline, the Ruby project from Wyoming to the same hub in Malin, Ore., that Jordan Cove intended to connect to, came online.  On February 29, Jordan Cove notified FERC that it no longer intended to construct the import facility, and on March 16, FERC vacated its approval and dismissed the earlier applications for rehearing as moot.

Jordan Cove’s application for construction of an export terminal is currently in the pre-filing stages. How gas for export would get to Jordan Cove is still undetermined, as permissions and easements for the proposed import pipeline were never secured before the import project was cancelled. Further, FERC approval for the pipeline—which would have allowed it to condemn the necessary easements—was based on the then-need to supply the California natural gas market. That basis obviously no longer applies.

Dominion’s Cove Point LNG terminal near Baltimore (Figure 2) has seen similar dramatic changes in its role in the nation’s energy market. Cove Point is the only LNG terminal on the East Coast and has supplied the gas-hungry northeastern market on and off since the late 1970s. After Dominion purchased the terminal in 2002, imports surged and Dominion embarked on an expansion project that boosted import capacity to 1.8 Bcf/d. 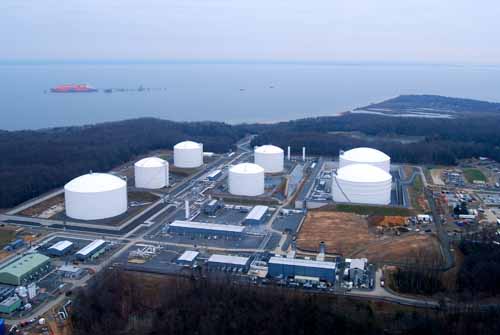 3. Dominion’s Cove Point LNG terminal in Lusby, Md., is one of the largest in the country, with a storage capacity of 14.6 Bcf. Courtesy: Dominion

But the number of ships calling at Cove Point peaked in 2005 and has dropped sharply since then, falling to zero thus far this year. In September 2011, Dominion applied to the DOE for export permission; FTA permission was received in October, with non-FTA permission still pending. Plans are now underway to construct a liquefaction facility that could export up to 1.0 Bcf/d, though no application has yet been filed with FERC. Cove Point’s location and connections to major pipeline corridors make it a prime candidate to export excess gas from the Marcellus shale field.

One possible roadblock is that environmental groups have announced plans to challenge the project. The objections are based on an agreement between the Sierra Club and Dominion surrounding the 2005 expansion, and the Sierra Club has suggested that the language of the agreement gives it the right to block any future expansion of the terminal. In response, Dominion preemptively filed suit on May 18 seeking a declaratory judgment that the agreement permits operation of an LNG export facility. Dominion asserts that the language of the agreement expressly anticipates potential liquefaction and export.

Pending resolution of this dispute, approval of the license, and completion of the necessary engineering studies, construction of the liquefaction terminal is expected to begin in 2014, with the facility expected to come online in 2017.

Ironically, though only one proposed LNG export project (Jordan Cove) is on the West Coast, the bulk of future demand is expected to be in Asia. As post-Fukushima Japan turns its back on nuclear power, its consumption of LNG is expected to grow strongly. One estimate projects that Japan will need 1 mtpa of LNG for every 1 GW of shuttered nuclear capacity. China has also set ambitious goals for increasing the share of energy it gets from gas, much of which will need to be met by LNG imports. The International Energy Agency (IEA) predicts that Chinese gas consumption will more than double by 2017, making it the third-largest gas importer after Europe and Asia/Oceania (Figure 4). 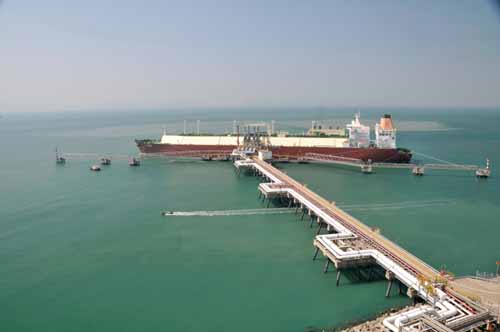 4. China is projected to become a major LNG importer by the end of the decade. It currently gets the bulk of its gas from Qatar but is expected to be a major market for U.S. LNG exports. Courtesy: Qatar Gas

A great deal of the pressure for U.S. LNG exports is driven by substantial differences in market prices for natural gas, which have hovered around $2.50/MMBtu in the U.S. but $9/MMBtu in Europe and more than $15/MMBtu in Asia. Of the three, the U.S. market is the most open. Gas prices in Europe are typically set by long-term contract indexed to the price of oil, which has increased sharply in recent years. Prices in Asia are also typically indexed.

However, the index-price model has come under substantial stress in recent years as the gap between gas and oil prices has reached unprecedented levels. A collapse of the oil index model—which some experts argue is inevitable, at least in Europe—could greatly change the economics of LNG export.

For the industry, meaningful U.S. LNG exports look more certain. On May 30, Rex Tillerson, CEO of ExxonMobil, while speaking at its annual shareholder meeting in Dallas, said the company was looking into its own LNG export projects. The entry of ExxonMobil, the country’s largest gas producer and the world’s largest publicly traded oil company, into the LNG export picture could potentially dwarf the already substantial projects in the works.

However, opposition to exports has begun to grow in Washington, D.C., and the environmental movement. After complaints from lawmakers that exports might cause domestic gas prices to climb, the DOE said in early June it would delay ruling on pending export applications until it completed a study on the possible effects. This means no further approvals are expected until the third quarter. Environmentalists, in general, have opposed exports on the grounds that they would expand gas drilling, especially by hydraulic fracturing, which has come under substantial fire this year.

Nevertheless, support for exports has been strong from policy analysts. On June 13, the Brookings Institute released a policy paper arguing that the relative costs and benefits of U.S. LNG exports weighed heavily in favor of the DOE and FERC allowing them to proceed. The study concluded that the effect on domestic gas prices and production would be slight because exports are unlikely to rise much above 6 Bcf/d. It also pointed out that limits on LNG exports would likely run afoul of U.S. obligations under World Trade Organization (WTO) and other free-trade agreements and could result in complaints with the WTO similar to the dispute the U.S. has lodged against China for restrictions on the export of rare-earth elements.