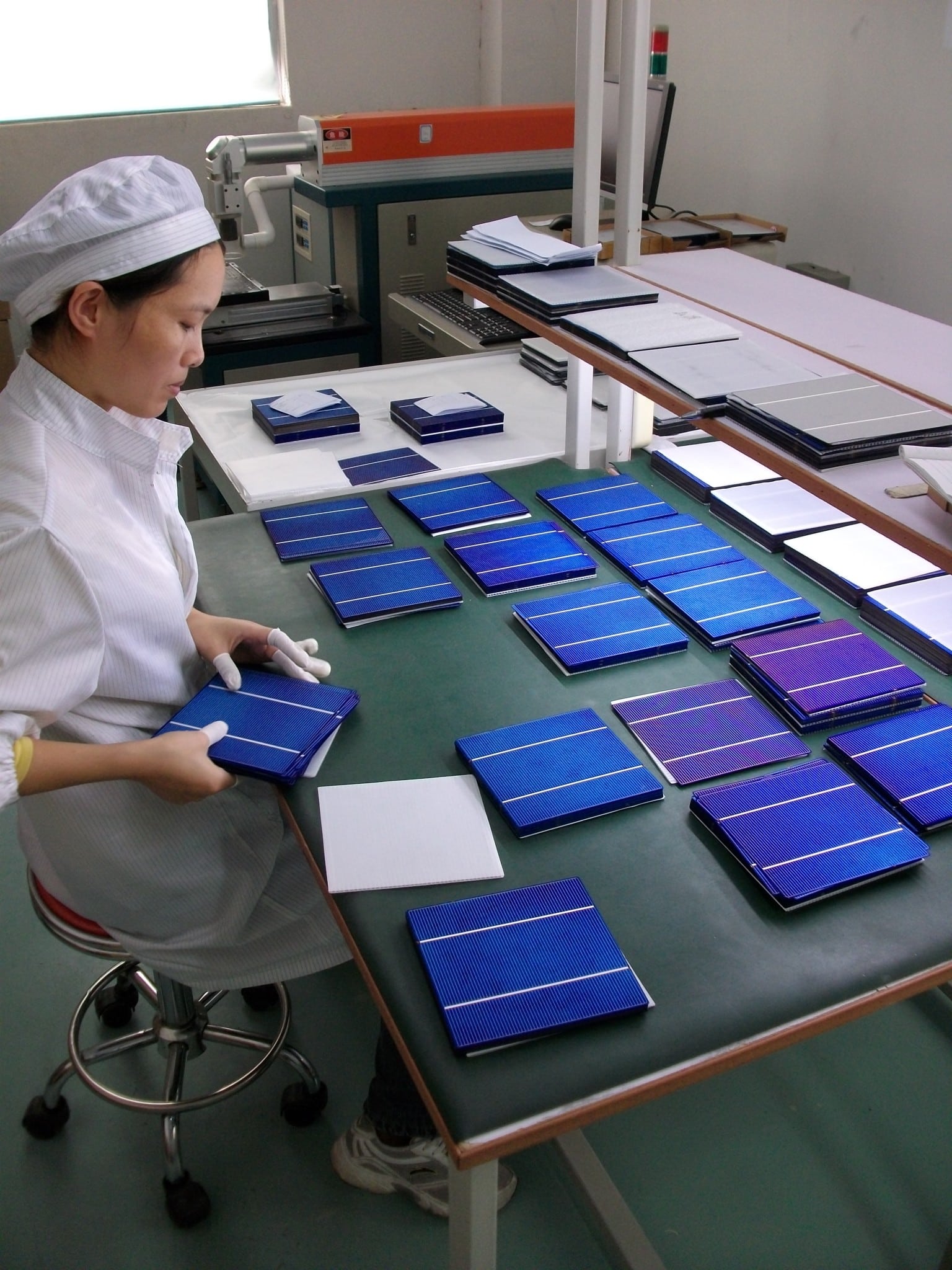 A solar system. As the plummeting prices of solar photovoltaic (PV) cells puts several companies out of business, a trade row between the U.S. and China is heating up, paving the way for possible tariffs on solar panels imported from China. This image shows a solar technician at a Chinese solar panel manufacturer, who is selecting cells manually. Courtesy: Solar Panels China

The dispute began on Oct. 19 when the largest domestic producer of crystalline-solar wafers in the U.S., German solar panel maker SolarWorld AG, and six other solar cell and panel makers representing the Coalition for American Solar Manufacturing (CASM) petitioned the ITC to halt the “ever-rising tide of heavily subsidized solar cells and panels that China’s state-supported solar industry is illegally dumping into the American market.” China’s “predatory and illegal aggression” was crippling the U.S. industry, forcing U.S. solar makers to compete against “massive shipments of illegally dumped and subsidized imports supported by the entire Chinese government,” CASM claimed.

At the heart of the matter is that solar cell and panel makers are struggling to keep afloat amid sinking panel prices. A supply glut of polysilicon has caused prices of the semiconductor from which solar cells are made to plunge 93%, from $475/kilogram (kg) just three years ago to $33/kg, as the world’s top five producers more than doubled output, Bloomberg reported in November. Falling prices of the oversupplied commodity product have squeezed margins for polysilicon manufacturers. But paired with price declines at every step in the solar supply chain, they have also stiffened competition among solar panel makers.

There are a few hundred solar panel makers around the world, a hundred of which operate in China alone. “From around 2004-2005, China went from being essentially a non-producer of [crystalline silicon] PV cells and modules to being, in a very small number of years, the world’s largest producer,” Edward Steinfeld, a professor of political economy at the Massachusetts Institute of Technology, told attendees at a December U.S.-China forum examining energy issues at Rice University in Texas. “It’s an incredibly rapid scale-up of production.”

But the rapid ramp-up is not an exclusively Chinese story, Steinfeld said. “There are almost 100 Chinese firms in PV manufacturing. Most are staffed by returnees—or Chinese nationals who studied or worked abroad. The production equipment is almost exclusively from global companies, and much of the high-end componentry also comes from overseas.” The reason that costs are lowered is not because labor involved in crystalline silicon manufacturing is cheap—a solar technician working in Shanghai costs about three times one in Malaysia, he said. The rapid scale-up is attributable more to regulatory mechanisms. “For a solar PV operation to get a fabrication facility up and running in the U.S., just to move through the permitting process requires three years—which in China can be done in five to six months. That all translates into costs—very powerful cost issues.”

Still, Steinfeld said, most Chinese solar panel makers are currently operating at negative margins as a result of falling PV prices. In the U.S., at least seven solar panel makers have been tipped into bankruptcy, including Solyndra, Evergreen, and Stirling Dish, while many others have been forced to close or downsize in the past 18 months.

And a global shakeout has just begun, industry experts say. Some two-thirds of existing polysilicon producers could be wiped out—even in China, where, of the 35 known producers, only four are expected to survive over the next three years. Of a few hundred or so solar panel makers worldwide, just 20 to 40 may remain standing in a few years’ time, Mark Bachman, a renewables analyst at Avian Securities, said in a November CNN interview.

There’s worse to come, analysts fear. As the U.S. Commerce Department opened a full investigation into CASM’s complaints, all six commissioners at the ITC unanimously voted on Dec. 2 that Chinese practices constituted “actual harm”—as opposed to just a “threat of harm,” which was a voting option. If the federal body, in a preliminary ruling, finds that Chinese panel makers have been “dumping” products in the U.S. at below manufacturing costs, the Commerce Department will impose offsetting tariffs from between 50% and 250% starting as soon as January 2012. The full-blown investigation will also seek to assess whether Chinese solar panels have been illegally subsidized, and it could lead to additional tariffs of 100% or more. China has responded by saying it would begin its own investigation of U.S. subsidies for renewable power.

Meanwhile, the threat of tariffs itself has become a divisive issue in the solar sector. In November, China’s largest solar power plant developer, CECEP Solar Energy Technology, a state-owned entity, shelved a planned project, saying U.S. antidumping moves will make it uneconomic for Chinese companies to build in states like California, New Jersey, and Texas. Major Chinese solar panel makers like Suntech Power Holdings Co. and Trina Solar that have set up shop in the U.S. have also threatened to shift manufacturing to other countries, citing magnified concerns about a massive increase in solar panel costs as a result of the tariffs.

Those companies and about 70 others (including prominent U.S. companies such as AES Solar and Westinghouse Solar) have set up their own alliance—the Coalition for Affordable Solar Energy (CASE)—in an effort to counter CASM claims. Their rallying message declares that global competition has made solar energy a reality in the U.S. and around the world, and that “SolarWorld’s action to block or dramatically curtail solar cell imports from China places that goal at risk.” The group also stands against “protectionism,” which it says will harm the future of U.S. solar power.

The solar row is a crescendo in Washington’s criticism of Beijing’s widespread support of its clean energy producers. In a submission to the World Trade Organization (WTO) in October, U.S. Trade Representative Ron Kirk pointed out more than 200 subsidy programs that China had failed to register with the trade body. Earlier last year Kirk spearheaded a trade dispute between the U.S. and China that arose after the United Steelworkers Union complained of harm from “unfair trade practices” to protect its domestic clean technology producers.

The union alleged, for example, that China restricted access to rare earth metals, granted wind subsidies to wind projects using localized wind power equipment, discriminated against imported goods and foreign firms, and required foreign companies to transfer technology as a condition of investment approvals. In June 2011, Beijing revoked its controversial public fund for wind power manufacturing—not because of the WTO dispute, it said, but because its wind industry was strong enough to compete with international players.

The United Steelworkers Union has said it fully backs SolarWorld’s petition. Bonn-based SolarWorld, meanwhile, is reportedly trying to get signatures from companies that make up at least 50% of solar manufacturing capacity in the European solar industry before submitting a formal complaint against Chinese producers to the European Commission.