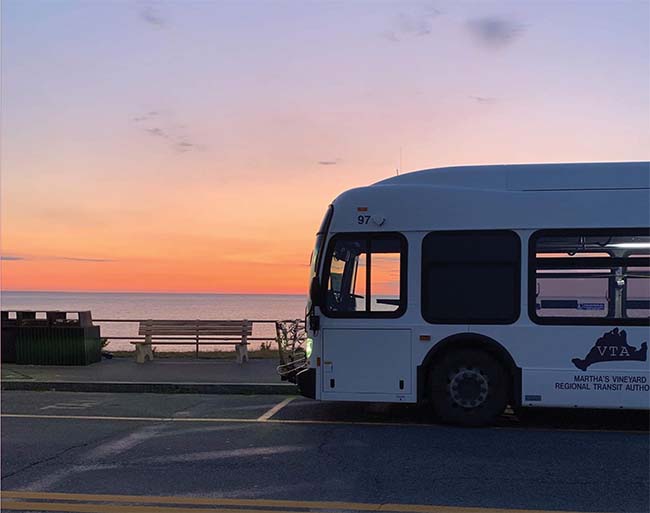 An innovative project that combines solar power with electric buses is POWER’s Distributed Energy Award winner. The microgrid it created can help the community during emergencies, as well as during peak demand periods.

Singer-songwriter Paul Simon once advised that one of the 50 ways to leave your lover is to “hop on the bus, Gus.” But on Martha’s Vineyard, the popular vacation destination off the Massachusetts coast, hopping on the bus is one of the best ways to get around the storied island.

Hopping on a Martha’s Vineyard Transit Authority (VTA) bus can provide a surprising glimpse of what may be an attractive, pollution- and carbon-free energy future. Half of the authority’s fleet—16 buses—are fully solar electric, from top to bottom, from carriage to storage, fueled from the sun. By 2027, the VTA says the entire bus fleet will be soaring 100% on solar and storage. Goodbye diesel fumes, geopolitical turmoil, and volatile prices. Hello quiet.

A Microgrid of Rolling Power Plants

Working with Enel X North America, with an assist from solar firm Borrego, the VTA in May 2021 began operating a $4 million solar-plus-storage microgrid that powers an electric public transportation bus fleet, enabling the community to rely on solar power rather than diesel fuel, decreasing risks caused by fuel price fluctuations and pipeline disruptions. Enel X says, “The Martha’s Vineyard Transit Authority (VTA) is setting the pace at the forefront of the public transportation industry with their microgrid and solar charging port project. Together Enel X and VTA have partnered together on a project that embraces circularity through vehicle electrification and renewable energy as the keys to the future.”

“What Enel X has done is we’ve actually purchased the solar panels that are charging the electric buses here,” Joel Harrington, director of public policy and institutional affairs for Enel X’s Eastern region, said. “What VTA has done is also creating an energy island where they can effectively disconnect from the grid and create their own energy services network here, a microgrid, to supply their bus fleet when either prices are really high or in the event of an emergency—a natural disaster—and public transportation on the island is critical during those times. So, by creating a microgrid here of solar, energy storage, when there is an emergency, when there is a storm, this operation can continue to go,” he said.

“When the buses aren’t running, you have basically 16 rolling power plants. And all the energy that is stored in those clean energy power plants, we are able to take that energy and effectively put it back out onto the grid to reduce peak demand when energy prices are really high and fossil fuel generation is at its peak [Figure 1]. We’re offering a service here to VTA that is both environmentally friendly and helps them reduce their costs,” said Harrington.

“Enel understood where we were at as an organization. They really understood what we were looking for and what we wanted to achieve for our community. They wanted to be a part of something that was new in transit, and they believed in us,” Angie Gompert, VTA administrator, said. “By changing the vehicle technology to a much quieter and environmentally friendly technology, we became a better neighbor and a better community member. The air is clean to breathe and it’s quiet. The drivers really like them [and] the passengers like the buses,” she said.

“It’s important to me that the agency is going to be built to be able to last and survive, and be able to contribute to the community for the next 20 plus years with the program we’ve rolled out here,” said Gompert.

Enel X is the advanced energy services business line of Italian energy giant Enel. The company in North America manages about 4.7 GW of demand response, with more than 70 battery storage projects in operation and contracted, along with more than 70,000 smart electric vehicle (EV) charging stations.

The VTA project is the second POWER magazine Distributed Energy Award in a row for Enel X. It won the 2021 award for its Virtual Power Plant (VPP) program in California. That project mobilizes and organizes a variety of decentralized, renewable generation assets not traditionally operating in the Golden State’s wholesale market, the California Independent System Operator (CAISO). The VPP consists of some 70 MW of distributed resources that bid into the CAISO’s day-ahead and real-time markets.

On Martha’s Vineyard, Enel put in a state-of-the-art solar carport with photovoltaic panels on the roof that charge the VTA’s electric buses, along with a 0.5-MW/1.5-MWh battery storage system, delivering back-up power with always-on dependability, especially important for coastal communities with higher risk of extreme weather. The project provides 467 kWAC of solar power.

According to Enel, the financing of the project is based on a 20-year power purchase agreement, which “locked in 30% savings for power produced over the next two decades. Also, using the battery as a behind-the-meter resource enabled the VTA to sell energy back to the grid.”

Enel adds, “The public-private partnership approach minimized financial risks by splitting funding between multiple parties, with half of the $4-million project funded through the partnership between Enel X and VTA and the other half funded by the Federal Transit Administration, the Massachusetts Department of Transportation, and the Massachusetts Clean Energy Center. Over its lifetime, this project is estimated to generate $1 million and serve as a model for other coastal communities.”

The VTA has plans to expand the flexibility of its electric fleet. In May 2021, Edgartown voters overwhelmingly approved a measure to add fast, wireless in-ground inductive charging at the town’s Church Street stop. When buses stop over the chargers, the vehicle synchronizes with the charging pad, delivering a partial charge to the bus batteries.

According to the authority’s plan, it says buses run from early morning to late at night—200 to 300 miles per day. Available E-buses only run 150 miles per battery charge in the summer and 75 miles in the winter. Without on-route charging, buses must be taken out of service for regular charging at the bus yard. However, with on-route charging, buses can run all day, even in winter.

—Kennedy Maize is a veteran energy journalist and long-time contributor to POWER magazine.