With the glut of natural gas on the market and consequent tumbling prices, much attention has been drawn to the possibilities for cheap gas-fired electricity to upend much of the global energy market. But while conventional combined cycle power plants (CCPPs) have grabbed most of the headlines, turbine manufacturers have also been quietly rolling out a new twist on an old idea: turbines burning blast furnace gases from iron and steel mills.

The concept of burning blast furnace gas (BFG) in a turbine is not new. The possibility was known as far back as the 1930s, when the first successful gas turbines were still being developed. One of the first BFG-fired gas turbines was installed in 1955 at U.S. Steel’s Edgar Thompson works in Braddock, Penn. A Westinghouse model W201 turbine was modified as a BFG blower and fired on BFG. Mitsubishi Heavy Industries (MHI) delivered an 850-kW turbine to Yawata Steel (now Nippon Steel) in 1958, the same year Alstom installed a unit at the Donawitz steel plant in Austria.

There were thought to be 30 such units operating in Europe by the 1960s. But although early units were custom-built for each plant, manufacturers have begun marketing turbines specifically designed for this application. And although the desire to capture lost energy remains a key motivation, mill owners have also begun realizing the opportunities turbines offer for substantially reducing emissions.

In a traditional blast furnace, iron ore, limestone, and coke (refined coal) are fed into a cylindrical refractory vessel and burned together to produce iron. Fuel oil, natural gas, and/or powdered coal are often added to the process to increase efficiency. In the ideal chemical reaction, molten iron settles to the bottom of the vessel while carbon dioxide exits the top, with the residual impurities (slag) floating on top of the molten iron, where they can be drawn off. In reality, because this reaction is reversible, an excess of carbon monoxide (which reduces the iron oxides to pure iron) is necessary to ensure that all the iron ore is consumed. Consequently, substantial amounts of uncombusted carbon monoxide, hydrogen, and hydrocarbons remain in the flue gas.

Most of the waste gases are immediately directed to burners at the base of the vessel that heat the incoming air and keep the reaction going, but more flue gas is typically generated than can be used. As a result, there is usually a certain amount of combustible gas left over. In addition, if the steel plant has its own coke oven (where raw coal is heated to become coke), the coke oven gases (COG, emissions from the coking process) are useable as a fuel.

Burning BFG and COG to recover lost energy in the steel-making process is far from being a new idea (Figure 1). Indeed, the coking process was historically an important source of fuel gas before more efficient sources and methods were developed. Traditionally, however, excess BFG and COG have been burned in low-efficiency boilers, with the resulting steam being used elsewhere in the plant. 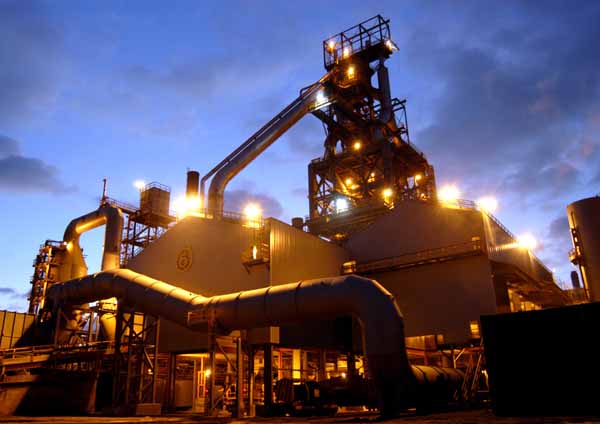 1. Like most blast furnaces, this unit at the Port Talbot Steelworks in South Wales, UK, captures and reuses flue gas to generate electricity. The large pipe leading down from the top of the furnace is carrying the blast furnace gas (BFG). Courtesy: Tata Steel

The biggest challenge with using BFG for power generation is that it is low Btu, considerably lower than natural gas. The composition can also vary unpredictably during operations, and it typically does not have a constant fuel value. COG has a fuel value comparable to natural gas, but it is also very dirty and must be extensively cleaned before use. Consequently, these waste gases were sometimes simply flared into the atmosphere because reuse was not always cost-efficient.

For these reasons, gas turbines designed for use with a blast furnace differ in some significant ways from conventional power plant gas turbines. The fuel variability in particular means that the turbine must be able to continue operating even if the Btu value should drop unexpectedly. Though the addition of COG can bring the Btu value close to the level of natural gas, COG is typically not always available in predictable amounts, because the coke oven does not operation continuously, and some plants, particularly in the developing world, sell COG as fuel to outside customers.

In addition, BFG and COG arrive at the plant at lower pressures and thus require larger and more powerful compressors. Extensive cleaning is also necessary because of the dust and tar content; cleaning is usually performed with a wet electrostatic precipitator. Different combustor designs are used, as the fuel flow is up to 20 times higher and much more air is required. These employ either larger and taller silos or a multi-cannular approach. Because of the lower calorific value, combustion temperature is lower, leading to a longer residence time in the combustor. Modern units can achieve efficiencies of up to 45%—less than a natural gas–fired plant but considerably better than the traditional steam boilers these units replace.

Because so much of the world’s steel production has moved to Asia, most of the recent development in this area has taken place there. MHI has been a leader in this field for several decades and currently has 21 operating low-Btu projects in China and another 17 in Japan. Worldwide, MHI has supplied approximately 70% of the combined cycle plants installed at steel mills.

Most of MHI’s turbines are designed for use with a combination of BFG and COG. However, MHI has recently been testing its M701S(DA) and M251S units at several plants in China using wider calorific ranges, such as by reducing the level of COG or eliminating it altogether during operation. This is necessary because, as noted, COG is often sold as a fuel gas in China, and obligations to outside customers sometimes mean no COG is available for the turbine. Previously, this meant the turbine had to be shut down. MHI found that modifications to the fuel supply system and operational settings were sufficient to allow the turbines to continue operating reliably.

MHI recently completed construction of a 150-MW CCPP for the Qian’an Iron and Steel Works in Hebei Province, approximately 150 km east of Beijing. The plant incorporates a single M701S(DA) gas turbine. The Shougang Group, which operates the Qian’an plant, had previously operated several blast furnaces in Bejing but was forced to close them as an environmental measure in the run-up to the 2008 Olympic Games. The company is now constructing several large-scale furnaces in Hebei Province incorporating advanced environmental protection measures, including MHI’s gas turbines. The Qian’an plant went online in 2010. MHI also supplied the 300-MW combined cycle plant for Anshan Iron & Steel Group in Liaoning Province, which went online in 2007 (Figure 2). At the time, the Anshan plant was the largest capacity BFG-fired unit in the world, though it has since been eclipsed by even larger projects. 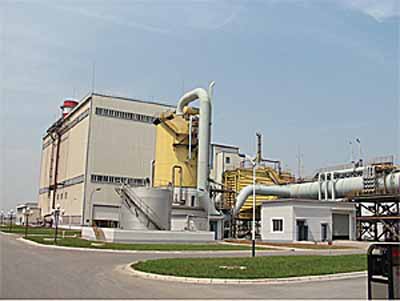 Alstom recently delivered a 480-MW CCPP in Brazil that was designed as an integral part of ThyssenKrupp AG’s new steel mill in the Santa Cruz industrial district of Rio de Janeiro (Figure 3). The plant consists of two GT11N2 low-Btu gas turbines, which are designed to start up on natural gas but, once running, can operate purely on BFG. Flue gases from the blast furnace are cleaned in a wet electrostatic precipitator and then compressed in two stages to about 16 bar for combustion. Two heat recovery steam generators feed a single steam turbine that also receives steam from the mill’s coking plant. The system, which went online in late 2010, is capable of supplying 200 MW for plant operations, leaving 280 MW to be exported to the grid. 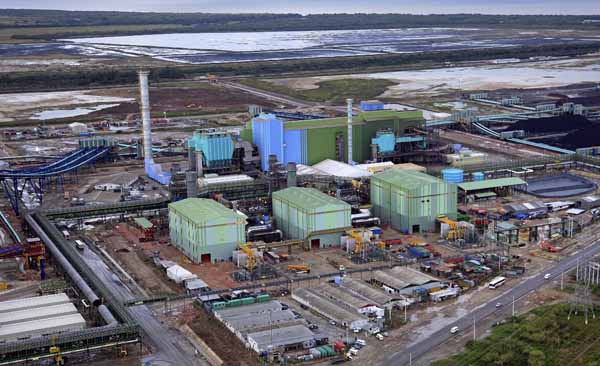 3. The 480-MW combined cycle plant (three green buildings in center) at ThyssenKrupp’s new steel mill in Rio de Janeiro was purpose-built to run on blast furnace gases from the mill. The project (unfinished at the time of this photo) is a net power producer, capable of putting up to 280 MW back into the grid. Courtesy: Alstom

The Alstom GT11N2 turbine was developed and deployed over the past 10 years specifically for steel mill usage with low-Btu fuel. It is notable for being able to operate purely on BFG through the use of a specially designed silo combustor, without needing any additional fuel. The first unit was delivered in 1994 to Bao Shan Iron & Steel Corp. for its flagship mill in Shanghai, the largest steel mill in China. The 150-MW CCPP is smaller than the Santa Cruz project and burns only some of the BFG from the steel mill. The second GT11N2-based plant, a simple cycle unit, was retrofitted into a cogeneration plant in Mizushima, Japan.

General Electric (GE) has also moved into this field recently. The Wuhan Iron and Steel Co. (WISCO) in Wuhan, China, is the fifth-largest iron and steel producer in the world, turning out approximately 40 million tons a year. This massive production put an equally massive load on the local grid, to the tune of 10,000 GWh per year—an unsustainable drain in a country that is facing large potential shortfalls in electricity despite nearly doubling installed power capacity over the past five years. WISCO needed a way to reduce this load, while at the same time reducing its emissions—another critical issue facing China.

In 2006, WISCO approached GE about building a CCPP that would burn its BFG and use the energy to reduce the plant’s reliance on the grid. The system ultimately included two 9E 50-hertz gas turbines, two 9A5 generators, and the largest centrifugal fuel gas compressor GE had ever constructed (Figure 4). WISCO supplied local combined cycle boilers and a steam turbine to achieve a total output of 328 MW. The first train went online in December 2009 and the second in August 2010. GE engineers estimate that WISCO’s overall plant energy efficiency has improved by 25% to 40%. Furthermore, in addition to reducing the load on the local grid by 100 MW, the project is projected to reduce WISCO’s carbon dioxide emissions by 2 million tons per year. 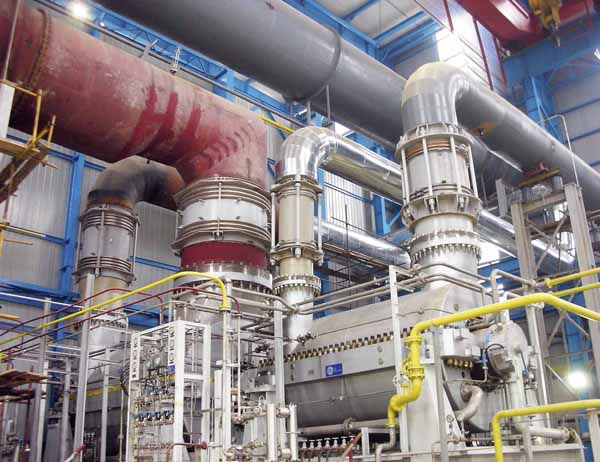 4. The compressor train at WISCO is one of the world’s largest. Courtesy: EagleBurgmann Germany GmbH

The WISCO project has been such a success that GE has been tapped to perform a similar retrofit on the Handan Iron & Steel mill in Handan City. The 170-MW project is projected to start construction later this year. (For more on the Handan project, see "GE Uses Steel Mill Gases to Power Turbine" in the January issue of POWER.)

GE is also in the initial planning stages of a slightly different configuration for a proposed steel mill project being developed by Air Products in Middletown, Ohio, for the AK Steel Corp. Middletown Works blast furnace. As part of the proposed facility, GE will provide a Frame 7EA gas turbine, which would be the first 60-hertz turbine GE has used for such a project. The completed generator is projected to supply more than 100 MW as well as process steam for the steel plant.

As with the WISCO and Handan plants, the Middletown project is intended to both increase plant efficiency and reduce emissions. Because of the environmental and energy benefits, the project is partially supported by funding from the Department of Energy. The project’s regulatory review process is currently under way, and GE is tentatively scheduled to deliver the 7EA turbine in mid-2012, with commercial operation projected for late 2013.