Top Plant: Not all coal-fired power plants are constructed by investor-owned utilities or independent power producers selling to wholesale markets. When Newmont Mining Corp. recognized that local power supplies were inadequate and too expensive to meet long-term electricity needs for its major gold- and copper-mining operations in northern Nevada, it built its own generation. What’s more, Newmont’s privately owned 200-MW net coal-fired plant features power plant technologies that will surely become industry standards. Newmont’s investment in power and technology is also golden: The capital cost will be paid back in about eight years.

Newmont Mining Corp., founded in 1921, is one of the world’s leading gold producers and has operations on five continents. Newmont has been actively mining gold in Nevada for more than 40 years at several sites. About 35% of its global reserves are located in Nevada.

Approximately 130 MW of TSPP’s generation will be used for mining operations, including Newmont’s new Phoenix Project; the remainder will be sold to Sierra Pacific Power Co. The Phoenix Project is projected to deliver between 200,000 and 250,000 ounces of gold from an open pit gold mine and 1.3 billion pounds of copper as a mining by-product over its projected 20-year project life. The TS Power Plant is estimated to save between $70 million and $80 million a year in power costs for these mining operations.

The facility was commissioned only 27 months after the full notice to proceed. Successful performance testing was completed 10 weeks early, and full load was achieved only 27 days after first fire on coal (Figure 2). 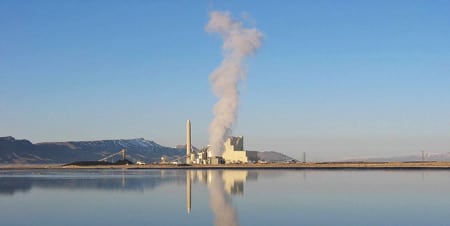 2. Early arrival. The TS Power Plant was commissioned in early 2008, only 27 months after the full notice to proceed. Newmont consumes approximately 65% of the energy generated by TSPP; the remaining 35% is sold to Sierra Pacific Power. Courtesy: Fluor Power

TSPP is an excellent example of the future of modern pulverized coal plant design and makes the plant an easy Top Plant selection. Newmont integrated the most advanced technologies available to plant designers in three specific areas.

Air quality control systems. Newmont took the high road when selecting the plant’s state-of-the-art air quality control systems (AQCS), which include a cost-effective approach to maximizing the co-benefit mercury removal in the downstream scrubber and fabric filter. TSPP is one of the first commercial installations of a brominated powdered activated carbon (PAC) system with sorbent enhancement at a full-scale power plant, one of the first commercial installations of a mercury continuous emissions monitoring system (CEMS) at a power facility, and it is certified to comply with the anticipated mercury emissions reporting requirements—a first for a new greenfield plant.

As soon as the plant completed contract acceptance testing, the first order of business was to run a spread of mercury removal tests with various amounts of sorbent and coal halogen additions to begin characterizing the plant’s mercury removal capability. We’ll discuss the results of all the AQCS tests later in this article.

Steam cycle design. The most straightforward approach to achieving maximum plant efficiency and lower emissions is to employ higher superheat temperatures. But higher temperatures come at the cost of advanced and difficult-to-procure metallurgy for the steam piping and the steam turbine. After many economic studies, Newmont selected 1,050F as the plant’s main steam and hot reheat steam temperatures operating on a 2,400 psig subcritical cycle after determining that higher capital costs—in return for a lower heat rate and emissions—were a good investment.

Of note is the very low NOx limit on this project: best available control technology was determined to be 0.067 lb per million Btu on a 24-hour rolling average. TSPP also is equipped with mercury control provisions built on B&W’s sorbent enhancement additive technology with halogenated powdered activated carbon (HPAC) injection upstream of the SDA and fabric filter.

As the turnkey contractor, Fluor also supplied the 350-foot stack and facilities for coal unloading, storage, crushing, and handling as well as storage silos for flyash, recycle ash, lime, and activated carbon for mercury control.

The water supply for this high desert facility comes from groundwater less than 200 feet below the desert floor. One groundwater well supplies water to the plant’s raw water makeup pond via a 2-mile-long pipeline. An additional well is located at the raw water makeup pond as a backup well. This water is used as makeup for the mechanical draft cooling tower, service water, scrubber, and coal- and ash-handling systems.

Cooling tower blowdown, after nine cycles of concentration, is sent to one of the four lined evaporation ponds, each 21.5 acres in cross sectional area and 3 feet deep (Figure 3). A smaller on-site well supplies domestic water needs and boiler water makeup after passing through a reverse osmosis (RO) system and a mixed bed demineralizer. Boiler blowdown and RO reject water are discharged to the cooling tower and recycled. 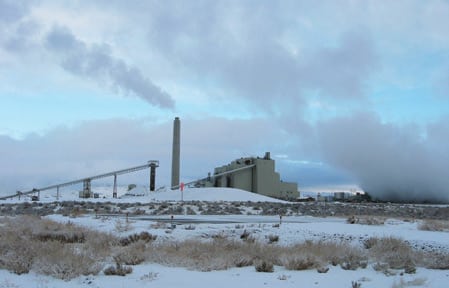 3. Zero discharge. Cooling tower blowdown and plant wastewater are collected and transported to one of the plant’s four lined process discharge ponds to evaporate in the dry heat of Nevada’s high desert. In the foreground is the coal pile storm water runoff evaporation pond. Courtesy: Fluor Power

Regulatory uncertainty only slows the permitting phase of a project, so Newmont elected to proceed with maximum achievable control technology (MACT) because it was expected to be the most conservative regulatory approach under the then-soon-to-be-released Clean Air Mercury Rule (CAMR).

Under the assumption that mercury would be regulated by the Environmental Protection Agency (EPA) as a hazardous air pollutant with emissions limits based on MACT under Section 112 of the Clean Air Act, a permit emission limit was set at 20 x 10-6 lb/MWh over a 12-month rolling average based on the proposed MACT rule (January 2004). This limit was almost one-fourth of the CAMR limit later set under Section 111 by the EPA.

With CAMR recently vacated, the status of state programs regulating the heavy metal is unclear. However, Newmont took the high road and entered into an agreement with the Nevada Bureau of Air Pollution Control to use the mercury CEMS to optimize the mercury removal systems already installed at TSPP. The air permit issued by Nevada also requires a Method 29 source test to verify compliance.

Newmont’s TS Power Plant achieved full load on February 18, 2008. The plant staff were consumed with final commissioning and tuning of the facility during the first quarter of this year.

Next came full-scale mercury reduction testing over a seven-week period in May and June 2008 for a wide range of boiler operating conditions and mercury-reducing additive injection rates. The objective of the mercury testing was to maintain stack mercury emissions below the air permit requirement of 0.02 lb/GWh (~2.1 µg/dscm) with various combinations of reagent injection rates.

Two approaches to reducing stack mercury emissions were demonstrated: sorbent enhancement additive (SEA) to the coal and HPAC injection upstream of the SDA. Both the sorbent and reagent addition systems were supplied by contract, as part of the new boiler and AQCS (Figure 4). The summary results show that stack mercury emissions can be maintained below the permitted emissions levels with moderate additive injection rates of less than 400 ppm by weight of chloride added to the coal and less than 1 lb/Macf HPAC added to the air heater outlet flue gas for the particular Powder River Basin coal used. 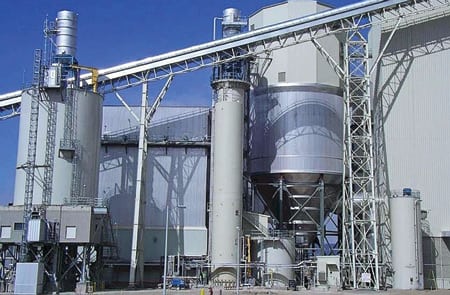 4. Get the Hg out. Full-scale mercury reduction testing was completed over a seven-week period in May and June 2008 for a wide range of boiler operating conditions and mercury-reducing additive injection rates. The tests confirmed that mercury emissions were reduced to below the extremely low levels required by the plant’s air quality permit. Shown is a portion of the plant’s air quality control system equipment. Courtesy: Fluor Power

The much lower relative cost of calcium chloride (compared with halogenated carbon) may mean that SEA is used before HPAC injection. The TSPP staff is continuing testing to determine the optimum combination of SEA and HPAC injection rates.