Emissions of SO3 (or its hydrated form, H2SO4) have created a nagging problem for some coal-fired power generators after they’ve installed a selective catalytic reduction (SCR) system. If your plant is in that unfortunate group, here’s a summary of  the state of our understanding of the problem—and its solutions.

SO3 emissions are formed by oxidizing SO2 in the catalyst. Beyond the periodic “blue plume” that appears under the right combination of atmospheric and coal combustion conditions, the acidic nature of the emissions can also adversely affect equipment life and performance.

POWER published a series of three articles (October 2006, February 2007, and April 2007) written by Robert E. Moser of Codan Development LLC that we consider to be one of the most comprehensive treatises ever written on the subject. Your first step in understanding various SO3 formation mechanisms and their effects on power plant operations is to read those three articles.

The editors also dedicated the March/April 2007 issue of COAL POWER to methods of controlling SO3 emissions by focusing on successful case studies. Of particular interest are case studies about the methods used by AEP and Dominion Generation plants that eliminated SO3 emissions and recent work by NETL on why coal-fired plants with wet scrubbers are particularly prone to acid-related stack opacity problems. To find these and related articles in our archives, just type “SO3” in the COAL POWER home page search box. If you have experienced the dreaded “blue plume” or are considering an SCR upgrade at your plant, both series of articles are must-reads.

Where Does SO3 Originate?

Part I of Moser’s series of articles presents a cogent discussion of SO3 formation mechanisms and SO3’s effect on equipment life and maintenance concerns. In brief, SO2 is formed when sulfur in coal is burned and further oxidizes perhaps 1% to 2% of the SO2 to SO3 during the combustion process. The amounts are dependent on many variables but principally are determined by the type of boiler and its combustion stoichiometry and the volume of SCR catalyst present. Moser notes that the amount of SO3 produced can vary from a few ppm with low-sulfur coals to 30 ppm to 40 ppm or more for very high sulfur coals. SO3 generation can also increase when the boiler is operated at low loads, because reducing the temperature of the flue gas leaving the air heater increases SO3 fouling and corrosion.

Moser goes on to note that SO2 is also oxidized in the SCR reactor, forming SO3 at a rate of 0.3% to around 2%, with the norm about 1%. The increase in the amount of SO3 leaving the SCR system is a function of the oxidation level of its catalyst: Very low oxidation catalysts raise the level only slightly, but high-oxidation catalysts can double the amount. Further downstream the flue gas will continue to cool and the amount of vaporous sulfuric acid formed is a function of dew point of the gas or the amount of moisture in the flue gas.

By the time the gas has exited the air heater, at a temperature around 300F, most of the SO3 from both sources has taken the form of vaporous sulfuric acid. When further cooled in the flue gas desulfurization (FGD) system, the vaporous sulfuric acid undergoes what Moser calls “shock condensation,” which produces very fine aerosol particles that, for the most part, are too small to be captured in the FGD system, so they enter the atmosphere as a sulfuric acid aerosol mist. At best, conventional wet FGD systems may achieve anywhere from marginal to perhaps 30% SO3 removal. However, depending on the arrangement particulars of the plant, some SO3 will condense on flyash particles and end up in the air heater or electrostatic precipitator (ESP). Figure 1 illustrates the forms that SO3 takes at various points in the flue gas stream. 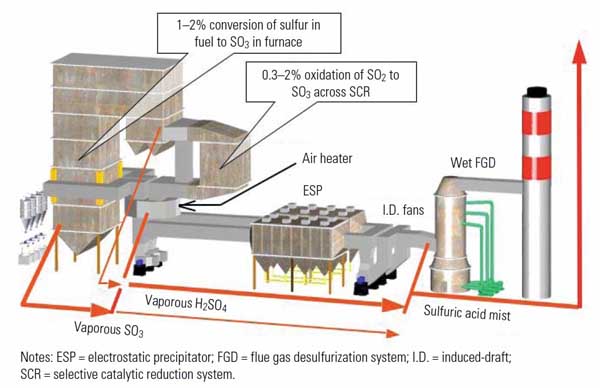 1. Where SO3 is created and the forms it takes. Source: Codan Development LLC

How Is SO3 Eliminated?

One of the most popular procedures for eliminating SO3, and the one used by AEP and Dominion in the referenced case studies, is injecting a sorbent into the fuel stream, into the furnace, or into the flue gas stream. In each case, the sorbent reacts with SO3 in the flue gas to form a solid compound that is easily removed in the plant’s particulate collection device—an electrostatic precipitator or fabric filter.

AEP pioneered the use of trona for SO3 mitigation at its General Gavin plant and then introduced its proprietary process across AEP’s entire bituminous coal-fired fleet where both SCR and FGD systems are in place. Similarly, Dominion Generation implemented a limestone sorbent injection system at its Chesterfield Station using the CleanStack technology jointly developed by the University of North Dakota’s Energy & Environmental Research Center (www.eerc.und.nodak.edu), Marsulex Inc. (www.marsulex.com), and Alstom Power’s Air Preheater Co. (www.airpreheatercompany.com).

The common thread between the AEP and Dominion Generation projects, and in many other successful SO3 mitigation projects across the industry, is finding the right sorbent to optimize SO3 reduction given the specific boiler and air-quality control system components in place at a plant.

Chances are you aren’t familiar with trona (a high-reactivity sodium sorbent), its properties, or where it comes from. One of the leading suppliers of sodium bicarbonate, or trona, to the power industry is SOLVAir Products, part of Solvay Chemicals Inc.

Dr. Yougen Kong and his team presented a comprehensive presentation at the May 2008 ELECTRIC POWER conference on the sources and uses of trona in the power generation industry and its advantage in SO3 mitigation. Download a PDF of their PowerPoint presentation, “Dry Sorbent Injection of Trona or Sodium Bicarbonate for Air Pollution Control and Corrosion Prevention,” as part of your research into your SO3 mitigation options.