Call it the "trillion dollar conundrum." Really big money is needed to equip the U.S. transmission system to handle a variety of new requirements and increased load, but it isn’t clear how to raise it, spend it, or recover it. Expect new renewables projects to die on the vine until the gridlock loosens.

A trillion dollars is the amount that electric transmission grid mavens meeting in Baltimore in mid-September suggested will be needed to upgrade the U.S. electric transmission system; build and integrate new (often nondispatchable) renewable electric generation (see figure); cope with carbon emissions reductions that comply with state and, likely, national requirements; and fold new nuclear and clean coal resources into the grid. 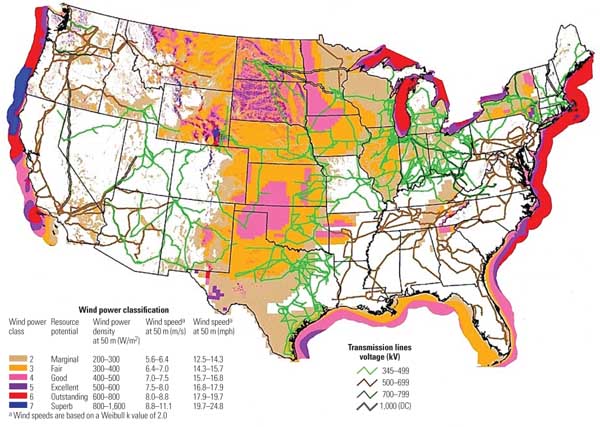 The grid investment alone, say the experts, is more than $50 billion, the minimal cost of overlaying a high-voltage (HV) AC and DC transmission system on the existing transmission grid. The aim is to create an interregional, perhaps national, high-voltage (765-kV AC and HVDC) highway to link into the lower-voltage local transmission grids, and then into the distribution network. It’s a mighty difficult proposition, and mighty expensive.

The ultimate result of that staggering investment, grid gurus said at the Platts Transmission Planning and Development Forum, could be a nationwide, integrated, interoperable grid. In short, a national electric transmission system, which the U.S. lacks and, the panelists agreed, needs desperately. It may not happen.

The whole proposition is made much more difficult in the environment of the credit meltdown that struck just before and as the grid meeting was taking place. Ironically, two days after the Platts conference, Baltimore-based Constellation Energy, a Fortune 500 company, agreed to be sold to Warren Buffet’s Omaha-based MidAmerican Energy Holdings for $4.7 billion, a fraction of Constellation’s market capitalization at the beginning of the summer. Also, in early October, Exelon offered $6.2 billion for NRG. On Nov. 10, NRG’s Board of Directors rejected the offer, saying it "significantly undervalues NRG." Had the merger happened, it would have created the largest U.S. utility, with 47 GW of capacity.

When the Northeast transmission system collapsed in August 2003, former energy secretary Bill Richardson commented that the U.S. has a "Third World grid." He was wrong (most Third World countries have no grid at all). But Richardson highlighted a real problem. The U.S. electricity grid is fractured along utility and regional lines, minimally interconnected, and mostly isolated from its larger neighbors, even when they are next door. It’s an antiquated, creaky system for moving power around, according to many observers.

A rational, planned grid would be an integrated neural network (similar to the Internet) that could overcome the shortcomings of the existing electric transmission infrastructure. It would, among other qualities, trump the geographically bifurcated East-West nature of the U.S. grid and its propensity to collapse in the face of unanticipated challenges. The failure of the grid in 2003, said panelists at the Baltimore conference, was a precursor of what could happen in the future if major investments aren’t made.

Maryland Public Service Commissioner (PSC) Allen Friefeld warned that his state could be short 5,000 MW of generating capacity by 2011. "The lights will begin to flicker" in the Eastern Interconnection, he said, unless new power supplies become available to the PJM Interconnection that supplies Maryland. Particularly troubling for Maryland and other PJM member states, noted Freifeld, is that many PJM transmission projects are aimed at moving power from New Jersey into power-short New York. At the same time, New Jersey and the eastern coastal region are facing future capacity shortages.

The U.S. has an Eastern Interconnection and a Western Interconnection. "And never the twain shall meet," in the words of Victorian poet and novelist Rudyard Kipling. That’s a major problem for transmission topologists. The two grids just don’t connect with each other.

Integrating regional grids — and the ultimate development of a national high-voltage electric interregional highway — should be a national policy objective, according to many electricity mavens. That’s a big task for resource developers, financers, and utilities to bite off, and one not entirely ensured of success. The high risks, and the uncertainty of rewards, militate against investment.

Start with the fact that the U.S. does not have a planned electricity transmission network. The U.S. electricity grid, as Nick Brown of the Southwest Power Pool (SPP) noted in Baltimore, is a product of a state-by-state regulatory paradigm created in the early 20th century. Interconnection was not an issue in the 1920s. Seams and interoperability were local, not interstate or regional, issues.

Today, increasing requirements on the grid call for regionally and increasingly central (but not federally) planned approaches to electric transmission, according to many experts. It’s a daunting problem of finance, jurisdiction, engineering, and regulation.

As John Wilson of Houston-based Quanta Services noted, the nation faces an immediate need for 23,000 miles of new electric transmission (14,000 miles of that to serve renewable energy requirements in state renewable resource portfolios). That entails a need, among other things, for some 15,000 new linemen in a workforce where 80% of the workers are over the age of 40. These are skilled, highly paid jobs, where the replacements will need substantial training before they return the investment.

This occurs in an economic environment of a credit crisis, unpredictable fluctuations in energy prices, and a lack of clarity about inflation or deflation. Investors, as demonstrated by wild stock market swings, are clueless about the course of the economy. On top of that, there is a worldwide demand for commodities and services that drives up the costs of all projects, from commercial building to nuclear construction.

Then there is an unpredictable natural environment. Wilson, a Houstonian, noted at the Platts forum that he was out of power at home as a result of Hurricane Ike, which left some 4 million customers without electricity on the Gulf Coast. People in the Southwest, noted Wilson, "have become accustomed to air conditioning." (And that dependency exists far beyond the Southwest.) They have also become accustomed to predictable energy prices, which may not be so stable in the future.

Planning for integrated, interregional electric transmission projects, said Quanta’s Wilson, is something "no one utility, no one contractor, no one individual is capable of tackling alone." The message is that many must work together and bigger is better.

The SPP’s Brown told the meeting that the nation is in a "perfect storm" of uncertainty and complexity when it comes to electric transmission planning. Among the drivers of uncertainty are:

Brown told the conference that transmission is a small bottleneck that constricts solutions to the nation’s major electricity problems. "Less than 10% of the business is constraining 90% of our industry, because of our failure to invest in transmission," he said.

Vision for a new system

The new system, Osborn argued, must have the following characteristics:

Osborn and others commented on what they believe is an interesting policy implication of pending national interest regarding renewables. Both wind generation mandates and carbon reduction mandates favor increases in natural gas generation. But they have opposite implications for transmission.

Meeting renewable portfolio standards (RPSs) will require more investment in transmission to bring wind power from the Rocky Mountain West and Midwest to markets in the East where the population is densest and to the West and Southwest, where RPSs and population growth are greatest. That will require additional gas generation to balance wind’s instability and nondispatchability.

Carbon reduction strategies — driven by an anticipated federal cap-and-trade regime or carbon tax (which many energy economists favor) — will boost new gas generation, Osborn noted, at the expense of new electric transmission. "You don’t need new transmission if you use gas-turbine generation," he said.

The issue of transmission planning occurs in the context of the most basic issue of law in the United States — the role of the federal government versus that of the states. We fought a war over this issue, which didn’t completely determine the outcome. It’s still a fundamental question in federal courts.

In transmission planning, the dispute often gets called "seams issues." But "seams" is a term of art for a jurisdictional dispute between the states and the feds. It’s also an issue among the states. Whose regulation reigns supreme? The states’ or the feds’? State A or State B, or some third party, such as a consumer intervener?

An example is the proposed high-voltage transmission line that Allegheny Energy and Dominion Resources have proposed to run from coal-rich Appalachian generating regions in West Virginia to energy-starved areas of the East Coast, through the PJM Interconnection. The $1.8 billion project would involve 244 miles of 765-kV transmission, plus dual 500-kV lines in a shorter route involving Pennsylvania and Maryland. The Pennsylvania portion amounts to about 37 miles.

Earlier, West Virginia regulators reluctantly approved the application, and the Virginia State Corporation Commission has signaled that it is likely to approve the line. The Pennsylvania Public Utility Commission is likely to take up the issue soon.

The crux of the dispute is whether interstate transmission lines that don’t benefit the states they traverse, even if they benefit a wider jurisdiction, are valid under federal law. The U.S. Constitution, in the Commerce Clause, suggests that interstate projects supersede state authority. The 2005 Energy Policy Act gives the Federal Energy Regulatory Commission authority to override state decisions. But the constitutional issues are not clear, and the 2005 law is untried. It’s likely that any challenge to the 2005 law will take years to work through the federal courts.

There is an economic incentive to resolve the issues before they get jammed up in court. Maryland PSC Commissioner Friefeld said at the Platts conference, "The last thing we need is a seams issue — a jurisdictional issue — to get in the way" of a needed transmission project, as delay can drive up costs significantly. But there is no clear political incentive to streamline the process.

Many long-time observers of state and federal jurisdiction disputes expect that the 2005 law will result in challenges all the way to the U.S. Supreme Court. In the meantime, many electric transmission projects will sit on hold, awaiting a final ruling. Are your lights flickering?

What about that trillion dollars? Will it get invested in electric infrastructure? The Wall Street credit crisis, plus large demands from other infrastructure industries (telecommunications giant Verizon is committing $20 billion to build out a "last mile" fiber optic network to individual homes) suggest that demand for investment money will exceed supply. The result: The cost of money will escalate and fewer infrastructure projects of any kind will get built.

—Kennedy Maize is a contributing editor to POWER.