Consider these three facts: The U.S. power industry hasn’t ordered a nuclear unit in several decades (the last one was completed more than 15 years ago); nuclear unit construction has thrived in several other countries, most notably Japan; and today, the U.S. is about to embark on a massive new nuclear plant construction program (Figure 1). The obvious conclusion to be drawn from these facts is that the U.S. will be importing technology and construction techniques. 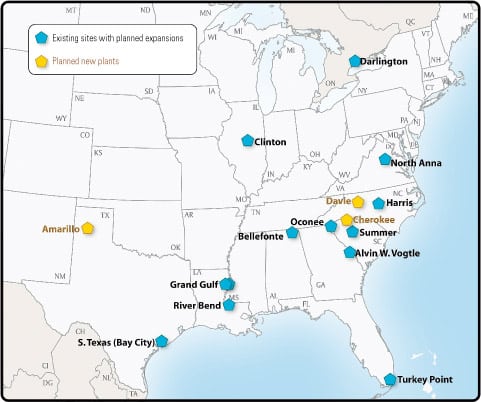 Case in point: Hitachi Ltd. has constructed 20 boiling water reactor (BWR) plants since 1970, four of them advanced BWRs being considered for the U.S. A presentation last year at a nuclear industry meeting clearly illustrated just how far construction techniques had progressed in the past decade or two.

Hitachi’s Junichi Kawahata and Jun Miura—who made a similar presentation, "Advanced Construction Technologies in ABWR," at ELECTRIC POWER 2007 in Chicago earlier this month—provided the background material for this article.

The main advances in ABWR construction include: 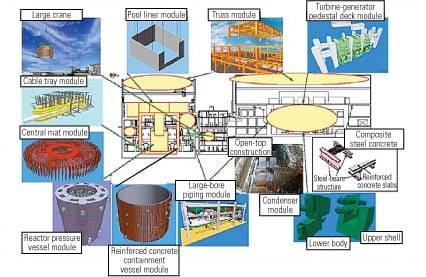 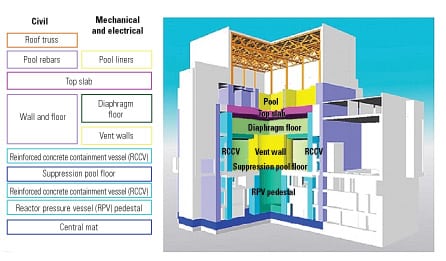 Considering the benefits of these techniques, it looks likely that the U.S. power industry will make a step change in the way it plans and builds new nuclear and fossil-fueled units. Firms that consider themselves world-class providers of power stations should take heed. Faster, better, cheaper is the perennial demand.

Although these techniques are new to the electric power industry, they are similar to those used by the U.S. Navy to design and fabricate new ships and submarines and by the petroleum industry to build offshore oil and gas platforms. Educational programs that show how the complex components of major industrial and defense structures are defined, fabricated, and assembled are running on TV, on the Discovery and History Channels.

Figures 4 through 8, showing construction of the ABWR Shika Unit 2 of Hokuriku Electric Power Co. in Japan, illustrate some of the techniques. 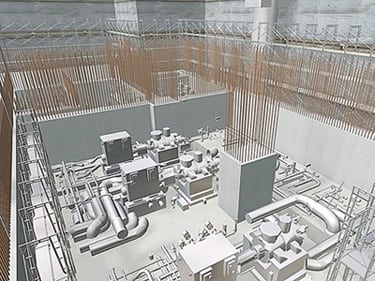 4. Open-top installation. Because ABWR buildings are relatively small, equipment arrangements must be more compact. This reduces costs and installation time. But applying open-top construction techniques is complicated and demands close collaboration among civil and mechanical contractors, construction subcontractors, and owner/operators. Traditionally, a general contractor had to coordinate the individual plans of each civil works firm, so a great deal of site rework often was required. Courtesy: Hitachi 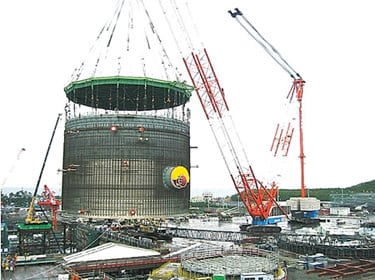 5. Prefabricated concrete vessels. The reinforced concrete containment vessel (RCCV) is a unique feature of the ABWR. Located inside the reactor building, it enables construction and installation work to proceed concurrently. Installation of the RCCV is a significant milestone on the construction schedule’s critical path. This photo shows erection of the RCCV liner module, including the liner plates, the innermost vertical and horizontal rebar, and the shell wall. Not shown, but part of the technique, is the base mat module. It includes the pedestal of the reactor pressure module, quencher anchor bolts, and a three-layer radial rebar configuration. Courtesy: Hitachi 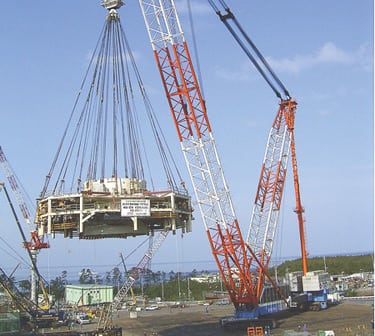 6. Heavy lifting. The RCCV upper drywell weighs 650 tons. It houses many of the drywell’s internal components, such as the shielding wall, pipe whip restraint structures, cable trays, and the piping and valves of the primary system. The lower drywell area of the RCCV contains such sensitive equipment as the reactor’s internal pumps and fine-motion control rod drives. Modularizing such components requires highly detailed preconstruction engineering before installation. Courtesy: Hitachi 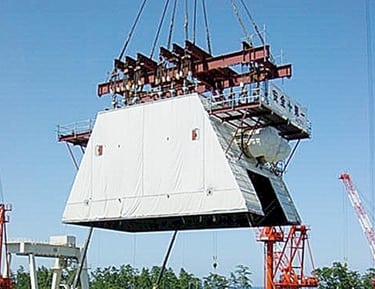 7. Condensing the schedule. Installation of the condenser in the turbine-generator island is another significant critical-path milestone. The lower condenser typically has four blocks that are shop-fabricated, transported to the site, and assembled. The lower blocks can be enlarged to include condenser tubes. The upper condenser block, including two neck heaters and structural members, weighs about 330 metric tons. Installation of this large block allows mechanical work around the condenser to begin earlier and reduces the amount of temporary storage area needed. Courtesy: Hitachi 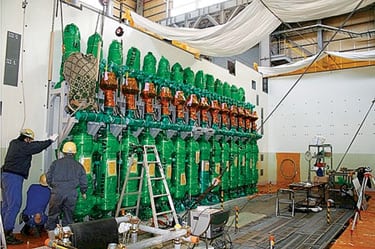 8. Some assembly required—at the factory. This photo shows the hydraulic control unit (HCU) being assembled at the factory (rather than in the field), with the cooperation of the project’s owner/operator and civil contractor. The unit is a complete room containing the building structure (walls and floor), installed equipment, and all accessories. Factory assembly ensures that the unit will remain water-tight during construction after reaching the site. Courtesy: Hitachi

Because Hitachi now exchanges design and construction data electronically with its civil engineering contractors, any adjustments can be made in detail during a project’s preconstruction phase. Among other things, sharing data through a common 3D-CAD platform permits parallel construction. Using computer screens to show where to set scaffolding and install equipment simplifies the collaboration process and makes it more precise. Another benefit is that all contractors can share temporary site facilities to a greater degree.

Hitachi uses the 3D-CAD platform in the field for construction schedule simulation, yard utilization planning, and installation of large equipment and modules. Module scope planning also is executed on the platform. Finally, Hitachi distributes work instructions for essential on-site preassembly and installation using 3D animations. The 3D-CAD platform interfaces with a construction support system interface that all subcontractors use.

Here are two examples of benefits. To mitigate peaks in on-site labor force, Hitachi has adopted the "floor packaging" construction method (Figure 9). With floor packaging, hydro-testing is conducted at each "floor" (partial hydro-testing), rather than waiting for the entire plant to be completed. Equipment in the basement is hydro-tested while the higher floors are still under construction. Hitachi also has developed a weldless closure jig to make partial-pressure tests more efficient. This approach avoids the need to have a new group of workers on hand during the scheduled full hydro-test period. 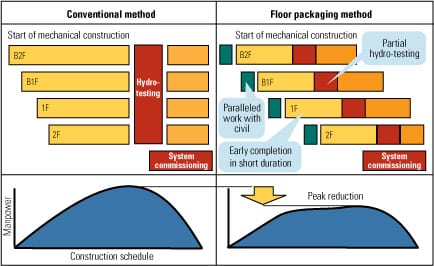 9. From the ground up. Floor packaging of modules reduces installation and start-up labor and, more importantly, construction time. Source: Hitachi

RFID instead of bar codes

To better track equipment, Hitachi makes use of RFID tags instead of bar codes. The tags, which can be reprogrammed, contain silicon chips and antennae that send data to an RFID transceiver. The use of RFID eliminates the need to scan equipment bar codes, reduces counterfeiting, and makes parts identification more accurate by reducing the effect of dust and other ambient factors.

The switch to RFID improves the quality of piping assembly and component fabrication (Figure 10), ensures that workers are qualified to handle components, makes on-site storage more efficient, and streamlines database and document interfaces (Figure 11). Hitachi calls RFID a "ubiquitous technology" because it can be applied to advantage in all aspects of a project’s design, engineering, procurement, transport, construction, and installation phases. 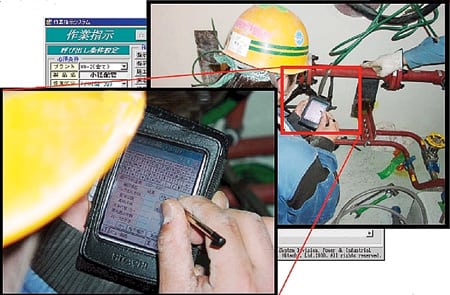 11. Digital supply chain. RFID allows all movements of components, activities, and workers to be tracked and coordinated in engineering and document databases, which streamlines management. Courtesy: Hitachi

—Timothy E. Hurst, PE, is president of Hurst Technologies (www.hursttech.com), a consulting engineering firm specializing in instrumentation and control systems for nuclear and fossil-fueled power stations. He also is a POWER contributing editor. Hurst can be reached at timh@hursttech.com.