The insatiable power demands of a huge modern metropolitan area like Seoul call for both big thinking and flexibility. The successful launch of this large, state-of-the-art supercritical coal plant required adapting to unforeseen changes in fuel supply while meeting highly restrictive environmental controls. The resulting high-availability facility is a POWER Top Plant

South Korea’s booming economy over the past several decades has dramatically improved the standard of living in this nation of 50 million people. But, as in many other countries in East Asia, electrical generation and transmission have struggled to keep up with demand. The problems are especially acute in the region around the capital. The Seoul metropolitan area accounts for 41% of the nation’s total electricity consumption but only 24% of total generation, meaning a large percentage of Seoul’s electricity must be imported from elsewhere. The cost of this long-distance transmission has been estimated at around $5 million per year.

To meet demand, South Korea has been adding capacity at a rapid pace, more than doubling its total since the late 1990s. Though it has ambitiously pursued nuclear energy as a component of the mix (see the Global Monitor in the April 2012 issue of POWER), about two-thirds of its capacity is thermal, mostly coal-fired.

Korea Southeast Power Co.’s (KOSEP’s) Yeongheung Power Station is located on Yeongheung Island, about 40 kilometers from Seoul. KOSEP, one of five companies spun off from the Korea Electric Power Corp. (KEPCO) in 2001 as part of the restructuring of the Korean power industry, began the project in 1999. The 800-MW Units 1 and 2 began commercial operation in 2004. These supercritical once-through, one-pass type boiler units were selected as a 2005 POWER Top Plant.

Despite the critical need for new capacity in the area, phase one of the Yeongheung project encountered substantial opposition from local and environmental groups, up to and including blockades of the site entrance and interference with construction. The plan to build high-voltage takeaway lines over the sea (because of geographical restrictions inherent in the island location) was a particular sticking point. Unraveling the opposition took years of negotiation and public outreach.

The second phase of the project comprised Units 3 and 4. However, this phase would encounter its own series of obstacles.

Units 1 and 2 had used T91 steel for the boiler tubes, which had experienced numerous instances of tube rupture near the superheater. The boiler operating conditions are 3,500 psia, 1,050F main steam and 590 psig, 1,100F reheat steam. Careful study of these incidents eventually showed them to be a result of scale formation and consequent overheating. The tubes would overheat when scale came off the inner walls and accumulated at the bends, disturbing fluid flow.

In order to address this problem, the tube design for Units 3 and 4 was changed to incorporate TP347 stainless steel, which has better strength at high temperatures. In addition, temperature monitoring was greatly expanded. The original design had thermocouples installed at only 46 points; the upgraded design incorporated monitoring of all 1,157 boiler tubes. The additional monitoring allowed overheating to be detected early and addressed by unclogging the blocked areas with steam blowing using the high-pressure turbine bypass valve.

Unit 3 entered commercial operation in 2009 and has an 870-MW supercritical two-pass, once-through boiler. The net plant thermal efficiency is 43.4%.

Major contributors to the project included:

As originally designed, all of the Yeongheung plant units were built to burn bituminous and high-quality subbituminous coal with an optimum calorific value of around 6,000 kcal/kg. However, increased demand, especially in Asia, has decreased the availability and increased the costs of high-quality coal. As a result, the plant has been forced to switch to lower-quality subbituminous and brown coal of around 5,400 kcal/kg.

Though fuel costs have been reduced, the use of highly moist and low–calorific value coal carries other problems with it. It increases the volume of flue gases and thus increases the load on the draft system. It also results in more slagging, as well as increasing the volume of sulfur- and nitrogen oxide (NOx) emissions, which leads to increased costs for emissions controls.

To ensure that the cost savings from the cheaper coal were not offset by higher operating costs, a task force was created to study the changes necessary to handle the different fuel. Among other adjustments, operators at Unit 3 lowered the pulverizer outlet temperature. In addition, in order to address the increased volume of flue gases, the plant increased the draft flow by 12% through alteration of the fans.

Such advanced monitoring and controls, and a commitment to efficient operation, enabled Unit 3 to achieve an almost 100% capacity factor in 2011, with zero forced outages. The plant uses an integrated control room for all four units, enabling operators to monitor conditions across the entire facility (Figure 1). 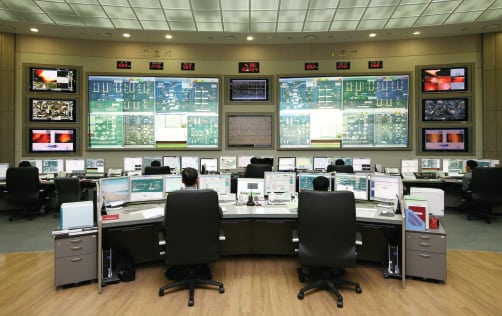 1. Bringing it all together. The Yeongheung facility uses an integrated control room to monitor conditions and operation across all four generating units. Courtesy: Korean Southwest

Because of its close proximity to the capital, Yeongheung Unit 3 is subject to strict environmental restrictions. The plant employs selective catalytic reduction (SCR) for NOx removal and a wet electrostatic precipitator for particulate control. A high-efficiency flue gas desulfurization facility is used to remove sulfur oxides (SOx). The plant was designed to emit very low concentrations of pollutants: SOx—25 ppm, NOx—15 ppm, and particulates—5 mg/Sm3. In practice, it has exceeded expectations and has been able to achieve levels of 22 ppm, 13.5 ppm, and 2.9 mg/Sm3 respectively.

The environmental controls are especially important because the local municipality, Incheon, is preparing to host the 2014 Asian Games. The need to provide an attractive, healthy environment for the games places a higher standard on environmental controls. The Yeongheung plant is upgrading its desulfurizing and denitrifying equipment to cut emissions even further, to 14 ppm, 12 ppm, 2.5 mg/Sm3 respectively.

The strict controls have necessitated some creative operational adjustments, however. The SCR suffered from heavy ammonium bisulfate (ABS) buildup because of higher volumes of ammonia being used, which led to fouling of the air preheater. Normally, the whole unit needs to be shut down to remove ABS buildup, but the cost and loss of generating capacity led Unit 3 operators to experiment with washing only one chain of the draft system without shutting down the whole plant. Though this proved to be very difficult, the results were satisfactory, and the Yeongheung plant is now planning to introduce the techniques developed to enable washing under normal operation in the future.

Unit 3 is a zero-liquid discharge facility. Wastewater is treated in accordance with Korean government regulations via catchment, neutralization, cohesion, precipitation, filtering, and absorption. Wastewater is reused as feedwater for the desulfurizer, and wastewater from the desulfurizer is reused again as feedwater for treatment of fly ash. More than 5 billion tons of wastewater were reused in 2010, and almost $300,000 were saved by not buying industrial water.

Poised for the Future

The addition of Yeongheung Units 3 and 4 to the generation base has resulted in a substantial decrease in transmission losses and increased grid stability, which is critical to the ever-growing South Korean economy. Unit 3 has demonstrated an impressive reliability record over the past year.

The Yeongheung site is theoretically large enough to incorporate 12 coal-fired plants similar to Units 1–4. Units 5 and 6, currently under construction, are scheduled for completion by December 2014. This will allow the plant to serve up to 30% of the capital area’s demand. Two more units, Units 7 and 8, are planned.