It’s not surprising that the Netherlands — a country famous for its tulips and many other horticultural accomplishments — is home to a state-of-the art commercial greenhouse that is being powered by cogeneration. In September 2008, the Royal Pride Holland facility, located about 50 kilometers north of Amsterdam, and one of the country’s largest commercial tomato greenhouses, began using the world’s first commercial 24-cylinder gas engine technology (Figure 1). Two of GE Energy’s 4-MW natural gas – fueled J624 GS engines began providing the greenhouse with cogeneration, also known as combined heat and power (CHP). 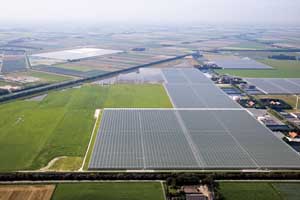 Because waste heat from the engines can be used at very low temperatures and CO2 captured from the exhaust gas can be used to increase crop productivity, the cogen plant’s overall energy utilization is an impressive 95%, according to Dick Kramp, GE Energy’s marketing program manager for Jenbacher engine greenhouse applications in the Netherlands. Since installing the new engines, Royal Pride Holland has reduced its production costs at the greenhouse by 20% (Figure 2). 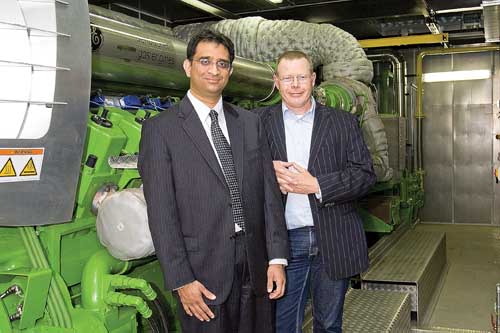 The Netherlands, whose population was recently estimated to be more than 16 million, has been at the forefront of Europe’s efforts to encourage various industries to increase the use of advanced cogeneration technology to improve local energy efficiency and security, which reduces fossil fuel consumption and overall air emissions.

According to the U.S. Central Intelligence Agency’s (CIA) World Factbook, Dutch annual electrical production was calculated in 2007 to be approximately 105.2 billion kWh, and its residents’ electric consumption was estimated to be about 122.8 billion kWh. The country has to make up this difference by buying electricity from other countries; annually, the Dutch import approximately 23.09 billion kWh and export about 5.48 billion kWh (CIA 2007 estimates). Dutch industries’ increasing use of cogeneration, which improves energy efficiency, should help to reduce the country’s overall dependence on imported electricity.

One example of the national focus on cogeneration is Cogen Netherlands, a Dutch association dedicated to the promotion of CHP. Cogen Netherlands works in close cooperation with Cogen Europe. It also assists organizations and companies that want to learn more about the Dutch CHP experience.

Cogeneration systems enable flexibility in generation and energy usage options. They can be supplemented with a boiler system to bridge peak heat demand periods. Their operating time and efficiency can be extended by connecting them to a heat storage medium. The thermal energy can be used both for heating water and steam production as well as for various types of process heat. Gas engine – powered cogeneration systems are also used for trigeneration (combined heating, cooling, and power). The generated power can be used by individual facilities such as hospitals or fed into the public power grid. Power plant electrical switch and control systems distribute the electricity and manage the engine, while hydraulic equipment handles the heat distribution.

Previously, Royal Pride Holland had installed nine of GE’s 3-MW, JMS 620 Jenbacher units at the same location. Prior to adding the two latest engines, GE’s Jenbacher center of excellence for greenhouse applications worked with the Royal Pride Holland staff to plan the layout of the greenhouse energy center for optimal positioning and integration of all the equipment to create the best possible energy infrastructure, according to Kramp.

The Royal Pride Holland plant is supported by a full-service maintenance agreement that will cover the units for up to 60,000 operating hours or 15 years of service. Two full-time workers handle the plant’s regular operations and maintenance.

"The Royal Pride Holland greenhouse has the potential in the coming years to be expanded to 102 hectares [approximately 252 acres], up from the site’s original 45 hectares, making it one of the largest facilities in the Netherlands and a major international horticultural production center [Figure 3]," Kramp said. 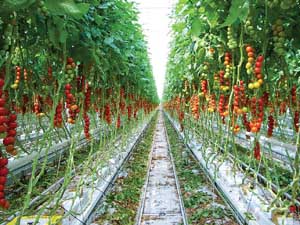 3. Dutch treat. The Royal Pride Holland greenhouse produces truss tomatoes of various types and sizes, but with one common characteristic: tasty flavor. During the approximately 11 months that the growing season lasts, the average plant grows to a length of 10 m to 12 m and produces 30 to 35 trusses (fruit-bearing branches) of tomatoes. Courtesy: Royal Pride Holland 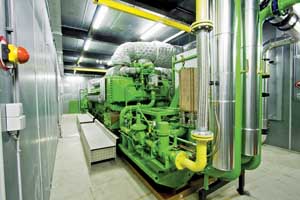 4. Advanced technology. When used in a cogeneration application, such as at the Royal Pride Holland greenhouse, the J624 Jenbacher gas engine produces about 3.6 MW of heat, enabling overall plant efficiencies of up to 90%. Courtesy: Royal Pride Holland

"The new 24-cylinder engine represents a quantum leap in advanced high-speed gas engine technology for commercial onsite power applications," Kramp said. "Consider that a single J624 with an electrical output of 4 MW can meet the electricity requirements of about 9,000 European households. In addition, used as a cogeneration application, the engine produces about 3.6 MW of heat — allowing for overall plant efficiencies of up to 90%."

The new engine will provide the same fuel flexibility (it can run on landfill and coal mine gas as well as alternative fuels such as biogas, sewage gas, and industrial waste gas) and high reliability offered by the entire Jenbacher gas engine portfolio, Kramp said.

High-speed engines like the J624 result in high power density as well as low installation costs, because they are smaller and lighter than current medium- and slow-speed engines. In addition, the J624 has a high efficiency rate, which leads to lower operating costs. The J624 features a high heat recovery rate via a customer-tailored, hydraulic integration of heat exchangers, allowing it to suit the individual facility’s specific temperature level requirements.

The J624 offers low emissions, due to optimized combustion and the lean burn principle, which reduces thermal stress on the engine parts. It has a low life-cycle cost and a long life time. Engines with high cylinder numbers are the most cost-effective.

The basic GE Energy Jenbacher CHP system consists of an engine generator unit and heat exchangers for the utilization of waste heat. The incorporation of a wide range of heat sources — from engine cooling water to oil and air/fuel gas mixture to exhaust gas — is configured to maximize the benefit to each individual customer.

Beyond greenhouses, another possible application could be natural gas – driven gensets for distributed generation. "Another potential use might include CHP systems for industrial applications, such as textiles, or even coal mine gas solutions," Kramp said. "Coal mine gas is highly associated with the greenhouse gas effect, so the potential for CO 2 emissions reduction is great. Any other applications of Type 6 engines will also be possible with the J624 engine. And bigger plant sizes up to 40 MW — and even higher — are made accessible with the higher output engine."

The power and heat created by the Jenbacher cogeneration system for the Royal Holland greenhouse are used in various ways. The electricity provides power for the greenhouse’s artificial lighting, and surplus electricity is delivered to the local grid. The thermal power efficiently meets the greenhouse’s heating requirements. Meanwhile, CO2 from the engines’ exhaust gas is captured and used as a plant fertilizer.

The plant is equipped with GE’s Jenbacher cogeneration – CO2 fertilization system, which purifies the engines’ exhaust. It allows the gas to be recycled in the greenhouse as a special fertilizer to help boost crop production — an environmentally preferable alternative to venting the gas into the atmosphere.

Royal Pride Holland’s cogeneration process reduces the facility’s fossil fuel consumption. For example, it can avoid primary energy input equivalent to the energy contained in more than 64,000 barrels of oil, according to Kramp. He also pointed out that during an average year, the facility emits 14% less CO2 than would be emitted by the separate production of heat and electricity.

"These calculations are based on performance of two natural gas – fired J624 CHP units, operating 8,000 hours/year, compared to separate production of heat by a gas boiler and the delivery of electricity on the European grid," he said.