The Edward W. Clark Generating Station, which has supplied electricity to the Las Vegas Strip for more than half a century, has learned the secret of life in the desert: adaptability. The plant’s early years featured conventional steam plants operated around the clock. By mid-life, Clark had been upgraded with two combustion turbine combined-cycle power blocks operated as intermediate-load resource. Today, the old steam plants have been replaced with fast-start peaking gas turbines.

NV Energy’s Edward W. Clark Generating Station, located a few miles south of the Las Vegas Strip, is a case study of how the power industry has evolved over the past half-century. Until Clark was built as Nevada Power’s first power plant, Hoover Dam was the company’s sole source of electricity. The first unit was built at Clark in 1955, the same year that the Riviera Hotel became the Strip’s first high-rise — at nine stories. That first 70-MW unit was soon joined by two additional units that increased the plant’s rating to 175 MW, enough to supply the 100,000 residents of the entire Las Vegas Valley.

NV Energy has doubled its company-owned generation since 2006, pushing its peak demand from about 2,500 MW to about 5,700 MW in 2008. The coincident peak demand on its system in 2008 was 7,152 MW, with the difference made up by contract power purchases. The planning reserve margin for southern Nevada is 12%.

Clark was originally constructed in the middle of the open desert when Las Vegas scarcely dented the skyline (Figure 1). Today, the plant is a strategically located grid entry point surrounded by homes, freeways, and industrial neighbors and is the epicenter of one of the fastest growing service territories in the nation. It’s also the hub of the energy distribution system that routes about 1,000 MW to Las Vegas to keep the Strip lit up, day and night. The station now also provides voltage support and spinning fast-start reserves for the region. 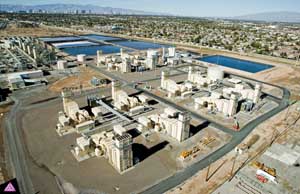 In the late 1970s, four Westinghouse 501B3 combustion turbines were installed. They were later upgraded to the B5 model, followed by another upgrade to the 501B6 configuration that featured coated turbine blades and an increased nameplate rating. The four combustion turbines were subsequently transformed into two 2 x 1 power blocks when heat-recovery steam generators (HRSGs) and steam turbines were added during 1993 – 1994 (Figure 2). When those upgrades were completed, the plant was dispatched as an intermediate-load plant rather than as just a peaking plant, as it had been in its pre-combined-cycle days. 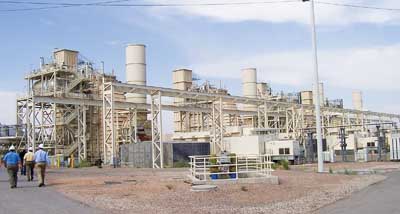 2. First came the combined cycles. Westinghouse 501B6 combustion turbines, originally installed as peakers in the late 1970s, became intermediate-load units when they were upgraded to a combined-cycle configuration in 1993–1994. The two power blocks, each a 2 x 1 combined cycle, today produce 460 MW during the hot summer months. Courtesy: NV Energy

Each power block operates at a baseload efficiency of 8,800 Btu/kWh and often operates in load-following mode at night. For additional flexibility, stack bypass dampers allow the combustion turbines to run in simple-cycle mode when an HRSG or steam turbine is unavailable. Another 54-MW combustion turbine, installed in 1973, also stands ready for peaking service, when necessary.

A tussle with the Environmental Protection Agency over New Source Review issues regarding the B6 upgrades led to an agreement that prompted NV Energy to further upgrade the four combustion turbines. NV Energy contracted with Power System Manufacturing to install that company’s LEC III technology, the equivalent of a dry low-NOx system, to further reduce emissions from the four turbines. The upgrades took a year to install. The project, completed in 2008, included complete replacement of the combustion system with a redesigned combustor featuring optimized primary and secondary fuel injection nozzles that ensure 100% premixing of fuel and air, a more effective premixer, precision flow controls, and enhanced cooling techniques.

Notably, the improved premixing does more than just reduce the average combustion zone temperature and therefore the turbine’s NOx output. It also lowers the turbine’s CO emissions and limits the combustion "noise" that can damage an engine when it’s operating under very fuel-lean conditions. After the upgrades were completed, tests confirmed that the LEC III upgrade reduced emissions to 5 ppm NOx and 10 ppm CO, a significant drop from the stock 501B6 levels that produced around 90 ppm NOx. Today, the two power blocks have a combined summer peak capacity of 460 MW.

NV Energy has been progressively adding renewable energy to its portfolio since it signed its first power purchase contract for geothermal energy in 1983. Today, NV Energy receives electricity from 27 different plants fired by a range of renewable energy sources, including geothermal, solar, hydro, and biofuels. The 64-MW Nevada Solar One (a POWER Top Plant profiled in the December 2007 issue) is surely the most notable of the new renewable projects connected to the NV Energy grid. NV Energy is one of the few U.S. utilities that can brag that it is meeting its state’s renewable portfolio standard (RPS) goals. In 2008, 9% of NV Energy’s sold capacity was supplied from renewable sources.

NV Energy’s grid may be capable of absorbing relatively large quantities of disparate renewable energy sources, but the pace and location of the additions, many of them nondispatchable, has been a challenge. Another challenge the company has always faced: The late afternoon peak load (air conditioning) is often twice the nighttime minimum load. By 2006, NV Energy decided that a centrally located and efficient peaking power plant was vital to a reliable and nimble power grid. All eyes immediately turned to Clark once again.

Construction activity at Clark had slowed after the combined-cycle plants entered service, but activity resumed in 2007. The first order of business was demolition of the three original steam units that had been mothballed years earlier to make room for a dozen new peaking combustion turbines.

Twelve Pratt & Whitney SwitftPac packages, each configured with two FT8 aero-derivative combustion turbines coupled to opposite ends of a double-ended generator, were installed during 2008 and early 2009 (Figure 3). Each SwiftPac package is rated at approximately 60 MW at standard conditions, which certainly don’t apply to the Las Vegas area. NV Energy rates the total output of the 24 combustion turbines during the summer at 624 MW, or about 52 MW each for dispatch purposes. The heat rate of a SwiftPac is a touch under 9,600 Btu/kWh at site conditions. Inlet fogging is also used to increase power and flatten out the efficiency curve on hot days.

Today, the entire Clark Generating Station features 19 units with a summer peak rating of 1,102 MW, effectively doubling the site rating from just five years ago while cutting total site emissions in half. 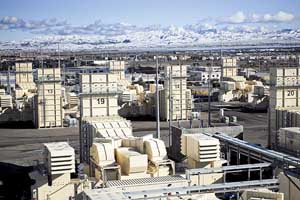 A peaking plant must be quick to respond when called upon to immediately quell a grid emergency and must be capable of taming an unexpectedly high peak load on a hot summer day. The 12 SwiftPacs can put more than 600 MW on the grid in about the time it takes me to lose $20 at the nickel slots — 6 minutes to synchronize and 8.5 minutes to reach rated power. The peakers also operate with a tiny emissions footprint by using water injection to reduce NOx emissions and a selective catalytic reduction system to scrub the exhaust to 5 ppm NOx and 2 ppm CO at only 5 ppm of ammonia slip.

The 12 SwiftPacs are arranged in three identical 208-MW load blocks. Block 1 entered commercial service in time for the summer 2008 peak; Block 2 followed in November 2008; Block 3 was added to the dispatch list in time to meet this year’s summer peak. Today, plant operators are kept very busy with one or more blocks of SwiftPac peaking power added to the grid for at least 4 to 6 hours daily to meet the evening peak energy demand. SwiftPac starting reliability has been almost perfect; only twice has a turbine failed to start out of hundreds of starts.

The SwiftPac peakers operate at about a 10% capacity factor, allowing the operation and maintenance (O&M) staff to equalize the wear and tear on them by periodically rotating the lead unit to equalize operating hours and unit starts. The first engine major inspection interval is 25,000 hours, so it will be several years before the first engine overhaul will be required.

The operating tempo at Clark has markedly increased with the addition of the SwiftPacs and the cycling of the combined-cycle plants. Now the plant’s staff of 40 — four operators and a supervisor per shift — must juggle the starts and stops of as many as 19 separate generators in a single day, depending on the system load demand. That’s a far cry from just three years ago, when the same size staff handled just the combined-cycle plants, which weren’t necessarily cycled daily. Today, every unit at Clark is a peaker that may be called to action at a moment’s notice. In addition, Clark’s O&M staff has responsibility for the 501B2 combustion turbine and another aging gas-fired steam plant at the nearby Sunrise Station.

Clark has undergone multiple makeovers during its long life, but perhaps the plant’s most notable accomplishment is its current safety record. There has not been a single lost-time accident over the past 15 years, covering 2.8 million man-hours. The plant has also just finished its third year without an OSHA recordable injury. Given the number and variety of contractors, suppliers, and company employees who have worked on so many upgrade and new construction projects over the years, this is truly a remarkable achievement.

I doubt that anyone knows what Clark’s next evolutionary change will be, but I am sure that whatever new challenges NV Energy faces in the future, somehow Clark will play a critical role in their solution.