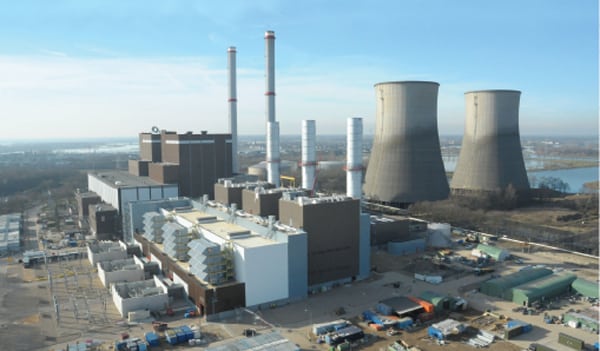 The 1,309-MW Claus C power plant showcases the successful repowering of an existing steam power plant by upgrading it and adding a highly efficient combined cycle plant that doubles the original plant’s power output for just a 35% increase in fuel consumption. In addition, the newly retrofitted plant is cutting CO2 emissions by 40% compared with a simple-cycle gas-fired plant of equal capacity.

Situated near the tri-national junction of the Netherlands, Germany, and Belgium, the retrofitted Claus C power plant is achieving high levels of fuel efficiency and flexibility. In addition to supplying power to the Netherlands, the strategically located Dutch facility is close enough to supply reliable, affordable, and sustainable power to both Germany and Belgium through short connections and even to France, if necessary.

The project team completed the conversion of Unit B to what is now called Claus C in July 2011, and the preliminary acceptance certificate (PAC) for Claus C was issued on Dec. 21, 2011. The repowering project cost more than €1 billion ($1.224 billion) and took four years. Gross said, “The efficiency rate of the gas-fired plant is above 59% (6,107 kJ/kWh) and, therefore, in line with the most efficient combined cycle power plants (CCPPs) of today.”

With a capacity of 1,309 MW, the plant’s “actual production during the year mainly depends on the spark spread (the difference between electricity prices in the marketplace and the net cost of producing electricity, including fuel, operation and maintenance, and other costs), Gross said. As the plant only entered commercial operation in December last year, no availability figures could be provided at press time. Gross explained that “already during hot commissioning the starting availability of the plant was high.”

Alstom factories in Poland, France, Turkey, Germany, and Switzerland supplied all the main components: three GT26 gas turbines, three horizontal HRSGs, the TOPAIR turbogenerators, and the ALSPA distributed control system. In addition, Alstom performed the retrofit of Unit B’s original steam turbines and furnished the electrical equipment and breakers. Alstom built the project on a turnkey basis and used experienced subcontractors in the fields of civil engineering and mechanical and electrical erection.

Gross said that “the target setting for the operations and maintenance crew—after having passed the learning curve—is below 70 people.”

“The main technology differentiator of Alstom’s power plants is the gas turbines,” Gross said. “The GT26 gas turbine and its sister product for the 60 Hz market, the GT24, use the sequential combustion principle as a way of increasing efficiency and operational flexibility.”

Gross explained that the GT24/GT26 combustion system is based on an Alstom combustion concept using the dry low-NOx EV (“EnVironmental”) burner in an annular combustor followed by the SEV (“Sequential EnVironmental”) burner in the second, annular combustion stage. (See “Flexible Turbine Operation Is Vital for a Robust Grid” in the September 2010 issue of POWER for a complete description of the GT24/26 design and operational features.) The single-shaft GT24/26 has a high power density and a small footprint that works particularly well in a combined cycle configuration (Figure 1).

The GT24/GT26 combustion system has the following advantages:

Successful Integration of Old and New

“The advantage of Alstom’s repowering proposal for Claus C was the fact that the plant was designed in a way that it was possible to reuse the existing condenser and cooling system,” Gross said. “The three GT26 gas turbines provided the flexibility that is required in today’s electricity market.”

Integrating items such as the existing hybrid main cooling water system (including the cooling water pumps), three condensers (retubed with titanium), the gas-receiving station, as well as the existing generator into the new configuration “was quite a challenge,” Gross said. Existing systems were integrated with the new plant and are controlled by a common ALSPA distributed control system.

Bringing the new steam header into the existing steam turbine building, plus the integration of steam piping coming from the HRSG into the existing plant structure and existing steam turbines, were also challenging because fully preengineered steam piping could not be used. “Engineering support teams from both Alstom and Essent successfully solved this problem, and in a smart way,” Gross said.

Essent issued the Claus C project notice to proceed to Alstom in December 2008. Despite all the project obstacles, the PAC was issued only 36 months later. Gross explained that in order to achieve such remarkable results, Alstom and Essent employed two teams of highly skilled specialists—one from Alstom and one from Essent—working in close cooperation.

“The complexity of the repowering project was challenging given the high number of interfaces (more than 4,000!) that needed to be identified and tied in. The project also included in-parallel retrofitting the existing steam turbine as well as integrating parts and machinery into existing civil structures,” Gross said.

Gross noted that the Claus C project was the first time Alstom has successfully provided a 3 x 1 configuration for a KA26 CCPP. This was done to increase the efficiency of plant operations.

Another design accomplishment was Alstom’s successful reuse and refurbishment of much of the existing infrastructure, such as the steam turbine building and electrical building and direct cooling facilities, including the main cooling water pumps and cooling tower.

In addition, Alstom carried out a complete new design of the steam turbines to meet the specific requirements for Claus C. The retrofit included replacement of the high-pressure and intermediate-pressure steam turbines. The rotor and inner casings of the low-pressure turbine were replaced as well, but bearings and outer casings were reused.

After its successful retrofit, the Claus C Power Plant is now one of Europe’s most efficient and clean generators. As the leading energy utility of the Netherlands and part of RWE, Essent is working to modernize the power supply in the Netherlands and Europe and advance diverse energy sources. In addition to the billions being invested in the generation of renewable energy—including €10 billion in onshore and offshore wind power alone—RWE/Essent has invested almost €5 billion in new, extremely efficient power plants in the Netherlands: the Claus C plant, the Moerdijk 2 plant (430 MW, gas), and the Eemshaven plant (1,600 MW, biomass/coal).

“The Claus Power Plant epitomizes the independent combination of renewable energy sources (wind and sun) and conventional electric power plants,” Peter Terium, deputy chairman of the executive board of RWE, said on July 1. “This power plant is extremely flexible and, at any point, can be started up when there is a lack of wind and solar power, and while there is, of course, still a demand for electricity by consumers, businesses, and industries. This includes when this happens in our neighboring countries.”