Duke Energy’s nuclear fleet provides electricity to approximately half of the utility’s customers in the Carolinas. The 2,538-MW Oconee Nuclear Station is part of that fleet and has been a pacesetter among U.S. nuclear plants since it began operation in 1973. In order to maintain the plant’s productivity and reliability, its staff implemented a comprehensive controls modernization project that spanned a decade. With its new state-of-the-art upgrades, the facility has become a leader in applying digital electronic technology in the nuclear power industry.

The Oconee Nuclear Station (Figure 1) is set in the northwestern corner of South Carolina, which is a land of waterfalls, cool pine forests, and rivers with fast rapids that are popular among whitewater rafters. Fittingly located not far from the Chattooga River, where the movie Deliverance was filmed, the plant for more than 36 years has successfully delivered more than 500 million MWh of electricity to its customers. According to Duke Energy, it is the first nuclear plant to achieve this milestone. 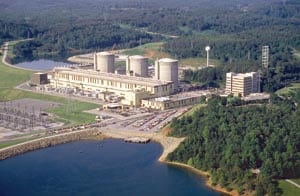 1.    Leading by example. Through the years, the Oconee Nuclear Station has excelled in providing safe, reliable energy. For example, it is the first U.S. nuclear plant to successfully deliver more than 500 million MWh of electricity to its customers. Courtesy: Duke Energy Corp.

Duke Energy Corp. designed and constructed Oconee Nuclear Station (ONS) in the late 1960s and early 1970s. Units 1 and 2 began commercial operation in 1973, and Unit 3 began operation in 1974. The units have a common Babcock & Wilcox pressurized water reactor design, and each has a rated electrical generating capacity of 885 MW. The original control systems were analog systems, based on standard power plant engineering practices of the time, with no redundancy designed into the systems. During the course of operation through the mid-1990s, plant trips and transients were experienced due to single-point vulnerabilities in the nonsafety control systems. Another problem became evident in the 1980s when original equipment manufacturers (OEMs) for control and protection systems began to discontinue support for that equipment.

Recognizing the economic and environmental benefits of operating ONS beyond the original 40-year license, Duke applied for and, in 2000, received a license extension from the U.S. Nuclear Regulatory Commission (NRC) permitting plant operation through 2034. Duke recognized that significant replacements and upgrades would be required to continue operating the facility in a reliable, cost-efficient manner well into the 21st century.

The obsolescence of control and protection systems due to discontinued OEM support was another issue being addressed at the same time as the trip and transient report recommendations. Facility personnel determined that digital system upgrades were the best options to address obsolescence of the reactor protection system, engineered safeguards system, Keowee Hydroelectric Plant exciter, Keowee governor, turbine supervisory instrumentation, and pneumatic controllers and instrumentation.

The last input to the modernization project derived from the need to isolate feedwater during specific design basis events in order to improve plant response and prevent excessive cooling. To address this concern, a new safety-related digital automatic feedwater isolation system was designed.

A thorough modernization overhaul was approved to perform all identified upgrades over the course of a decade. These upgrades have positioned ONS as a leading U.S. nuclear power plant in the application of digital electronic technology. The remainder of this article provides a summary of each upgrade.

In addition, Duke Energy developed the control software by converting existing analog plant control algorithms and then implementing experience-based enhancements to improve plant operations. As part of the upgrade, redundancy was built into the hardware and software design.

This installation was completed by late 1998. No plant trips or transients have resulted from ICS equipment failures following this upgrade. Historically, it was not uncommon to have two reactor trips a year due to ICS component failures.

This installation of a digital ICS was the first in the industry for nuclear power plants. 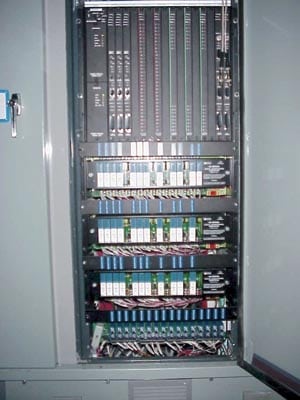 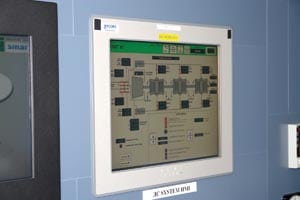 The improved performance of the digital system has also been evident during required equipment testing during power operation. With the original main turbine control system, the facility experienced reactor power swings of 3% to 4% during main steam stop valve tests, but with the upgraded digital system the reactor power typically varies 0.5% or less during a test. This more stable reactor response provides both operational and nuclear safety benefits. In addition, the main turbine control system design automated numerous manual operator activities to minimize the need for operator actions during chest warming, shell warming, and turbine start-up.

The main turbine control system digital upgrade was completed in 2004.

The control rod drive (CRD) system receives inputs from the ICS on desired control rod position and manipulates control rods to the demanded position. The digital upgrade of the CRD system utilized an AREVA-designed system on a triple-modular-redundant platform from Triplex (Figures 4 and 5). The triple redundancy built into the modular design dramatically increased the system’s fault tolerance. 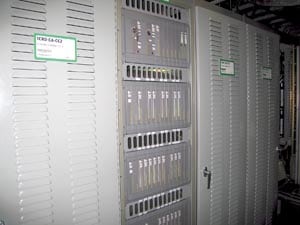 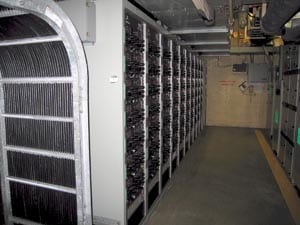 For example, the upgraded CRD system experienced the failure of a fuse disconnect in the AC power supply system, but this failure did not result in a reactor trip. As another example, failures of control rod power supplies have occurred with the digital CRD system. However, the redundant power supplies kept the CRD energized and thereby prevented dropped control rod events that could have led to reactor trips. In addition to better fault tolerance, design functions were added to the CRD system to improve system performance.

The CRD system digital upgrade is a nuclear industry first and was completed in 2008.

The main generator voltage regulator controls operation of the generator based upon load demand. In the past, the analog main generator voltage regulator routinely experienced equipment reliability issues, which resulted in the units being operated in a manual mode for extended time periods. The digital voltage regulator upgrade included an automatic digital system from ABB. This included redundancy to prevent plant trips and transients. As one example of the benefits of this upgrade, a developing issue on the measuring unit board was detected and the associated inputs were disabled in order to prevent a plant trip.

The main generator voltage regulator digital upgrade was completed in 2008.

Currently, design activities for this upgrade are in progress; implementation is scheduled to start on Unit 3 in 2010. The planned design incorporates redundancy in the control system to address equipment failure single-point vulnerabilities.

To upgrade numerous pneumatic controllers and instrumentation, the digital modernization project used a process control system based on a foundation fieldbus infrastructure. The pneumatic instrument loops are on the secondary side of the ONS units and impact the efficiency of the station’s performance. The conversion of each pneumatic instrument loop to an electrical instrument loop was not the preferred option due to limited space for installation of the cabling needed for the loops. Thus, the infrastructure was installed in the plant with remote access points that have trunk connections to the process control system. This infrastructure was installed with the conversion of approximately 50 instruments on each unit to foundation fieldbus technology.

The process control system used equipment from Smar Technology to set up plant infrastructure (Figures 6 and 7). This infrastructure addresses pneumatic equipment obsolescence and provides a means to continue with the upgrade of hundreds of additional pneumatic instruments over the next decade. The performance of the fieldbus controllers has demonstrated improvements over the pneumatic equipment with respect to equipment reliability. As additional loops are converted to foundation fieldbus on the process control system, improved plant efficiency is expected from better equipment performance and tolerances on the digital devices. 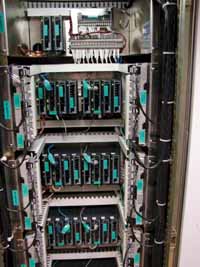 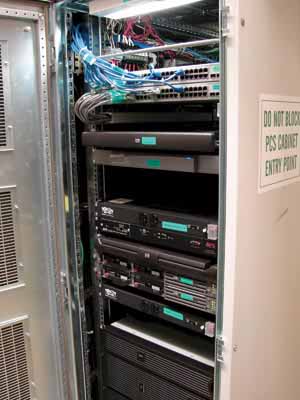 7. Continuous connection. Each unit at the plant has a network/power cabinet that provides uninterruptible power and network connection between field cabinets and system servers for the process control system. Courtesy: Duke Energy Corp.

Completed in 2008, the installation of the process control system is a nuclear industry first for large-scale utilization of foundation fieldbus.

The turbine supervisory instrumentation (TSI) system is a monitoring system for main turbine vibration. The digital upgrade for the TSI system addresses obsolete equipment and provides for future expansion to include the main feedwater pump turbine vibration instrumentation. A Bently Nevada System was installed for the TSI system digital upgrade. This project was completed in 2008.

The automatic feedwater isolation system (AFIS) performs a safety-related design function and isolates feedwater to a steam generator for specific design basis events. For the Babcock & Wilcox station design, steam generator isolation is required during some postulated accidents to prevent excessive reactor cooldown. Because AFIS is a new system added to address plant response during specific design basis events, a redundant safety-related digital platform was designed for the upgrade (by AREVA) using safety-related STAR modules. The installation of AFIS on all three ONS units was completed in 2002.

Most nuclear power plants rely on diesel generators to supply emergency electrical power. ONS has an emergency power design in which Duke Energy’s Keowee Hydroelectric Plant provides one source of emergency backup power. The Keowee Hydroelectric Plant was designed and placed in commercial operation in 1971. Due to its role in ONS support, upgrades for its exciter and governor systems were performed under the nuclear quality assurance program.

In addition, the Keowee governor was upgraded to address obsolete equipment concerns. Duke used the AREVA Teleperm XS system to provide controls for Keowee. The control system had specific performance criteria unique to the Keowee design due to its operational requirements.

Digital upgrades to the Keowee exciter and governor systems were completed in 2004.

The reactor protection system (RPS) monitors various inputs related to reactor core operation and shuts the reactor down by tripping control rods if any allowable values are exceeded. In this manner, the RPS protects the integrity of the nuclear fuel, which helps ensure the health and safety of the public. The engineered safeguards (ES) system monitors inputs that would indicate the occurrence of certain design basis events and actuates engineered safety features, such as cooling water injection, to mitigate these events.

The digital upgrade to the RPS system and ES system addresses equipment obsolescence concerns. It also includes system enhancements that include additional ES channels, which provide operational and maintenance benefits. Another major benefit of the RPS system and ES system digital upgrade project is the inclusion of online monitoring and diagnostic capabilities. Online monitoring allows elimination of periodic operator checks of system performance.

Because the RPS and ES systems are safety-related protection systems, NRC review and approval was required. Oconee’s RPS system and ES system digital upgrades will be the first digital systems to receive regulatory approvals in the U.S. An AREVA Teleperm XS system will be used for this upgrade, and NRC approval is expected in 2009; installation is scheduled to begin in 2011.

Workers at ONS are completing a 10-year program to upgrade 1970s-vintage instrumentation and control systems to state-of-the-art digital technology. In doing so, Duke Energy has become an industry leader in addressing the associated technical and regulatory issues. At present, the project team has completed digital upgrades on the integrated control system, the main turbine control system, the control rod drive system, the main generator voltage regulator, the process control system, and the automatic feedwater isolation system. Regulatory approval for digital upgrades to the reactor protection system and the engineered safeguards system is expected this year. Together, these upgrades are successfully addressing long-term plant reliability and original equipment obsolescence issues.