When TVA’s Bull Run Fossil Plant was erected in the mid-1960s, it could boast of having the largest boiler in the U.S., and the plant has enjoyed a long, enviable efficiency track record. Today the public judges coal plants by their emissions. Now that it’s been outfitted with the most advanced air quality control systems, including the latest flue gas desulfurization system design, Bull Run scores a perfect "10" in both categories.

The Bull Run Fossil Plant, located on the Clinch River near Oak Ridge, Tenn., is unique in that it is the only single-unit, coal-fired plant on the Tennessee Valley Authority (TVA) power system. The 920-MW plant uses a unique supercritical, once-through boiler technology with twin, divided-wall furnace boiler formed with about 300 miles of furnace, superheater, reheater, and economizer tubing. When the plant entered commercial service in 1967, its boiler was the largest ever erected in the U.S. (Figure 1) 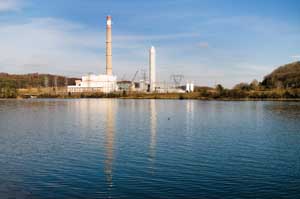 There are benefits to being unique: Bull Run has been consistently recognized as one of the most efficient steam plants in the U.S.

Time to Add a Scrubber

Bull Run burns either medium- or low-sulfur coals from Central Appalachia. TVA contracted with Advatech for the installation of a wet flue gas desulfurization (FGD) system, or scrubber, on the plant in 2005, after installation of a selective catalytic reduction (SCR) unit to reduce NOx emissions.

The Bull Run FGD Project — which added the eighth scrubber to the TVA system and was the second to use Advatech’s double contact flow scrubber (DCFS) technology — is part of TVA’s $5.7 billion emissions upgrade program. Of that total, $1.5 billion has been allocated to five scrubbers at four TVA plants. At last count, TVA had invested $450 million for its SCR and FGD system upgrades at Bull Run alone. TVA plans for two Advatech scrubbers to begin service at the Kingston Fossil Plant this year and next.

The FGD project contract release date was April 19, 2005, and the system entered commercial operation on December 13, 2008.

The Bull Run FGD system consists of a single DCFS twin tower absorber housed inside a 36,540-square-foot scrubber building plus recycle pumps that spray the slurry into the exhaust gas and forced oxidation compressors that blow air through the rotating air spargers that keep the limestone slurry mixture suspended. Also added were two 160-foot silos for storing preground limestone that is trucked to the plant.

In the Advatech DCFS system, a slurry of gypsum and limestone is evenly distributed throughout the absorber tower by spray nozzles, that are installed at the bottom. This is in contrast to conventional systems, in which slurry is sprayed from the top. As a result, the slurry contacts the flue gas twice, first when it is sprayed upward and again when the gas reverses direction (Figure 2). 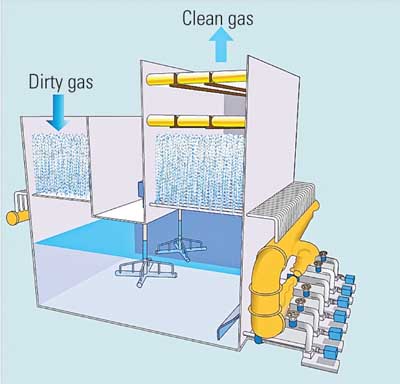 2.    Two-stage scrubber. The stack gas must pass through a shower of limestone slurry in each separate scrubber section to remove the SO2. That SO2 combines with limestone slurry to form gypsum, which is stored on site. Courtesy: URS Washington Division

The first tower is a cocurrent scrubber, where the exhaust gas contacts slurry mixture sprayed upward from the spray nozzles, which then follows the downward flow of the gas. The slurry droplets fall into a million-gallon alloy absorber tank at the bottom of the scrubber. The gas then exits the first tower and enters the second tower, which is a counter-current scrubber in which the gas moves up through the slurry mix that is sprayed upward. Again, the droplets fall into the common absorber tank. The flue gas exits the scrubber by passing through a two-stage vertical flow mist eliminator before entering the stack (Figure 3). 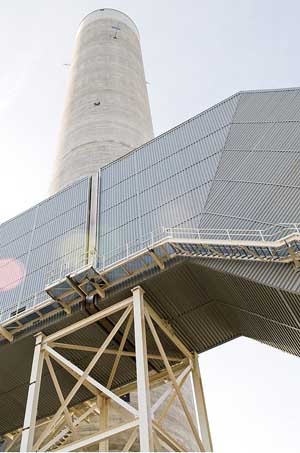 3.    Clean gas. The new 500-foot stack exhausts combustion gases after more than 98% of SO2 has been removed in the new scrubber. Courtesy: URS Washington Division

A slight increase in the size of the absorber, adding turning vanes in the existing unit draft system, and other passive draft pressure drop improvements kept the additional pressure drop of the system to a minimum. The gas flow rate is maintained between 10 and 15 fps through the absorber vessel.

At design conditions, the slurry solids content in the reaction tank is maintained at 30% by weight, promoting gypsum crystal growth and reducing scaling potential on the vessel’s internal surfaces. The high level of suspended solids also provides higher alkalinity in the scrubber slurry to enhance sulfur dioxide (SO2) absorption and makes the system more responsive to changes in inlet concentration of SO2 (Figure 4). 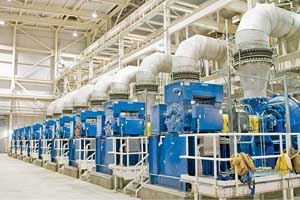 The Bull Run project encountered several challenges. One of the biggest involved major modifications to the existing ductwork to connect the FGD system. The initial plan for the major outage required for this work was to remove a large section of the old duct entirely and replace it with a new duct of approximately double the cross-sectional area. This plan would have required additional outage time to demolish the old duct before the new one could be erected. Instead, an alternate approach was developed and implemented.

During the first part of 2006, the entire industry experienced a high demand for commodities and fabrication shop space due in large part to utility air quality projects. Structural steel shape material and shop space were in short supply, as were absorber panel and flue gas duct shop fabrication space, and their availability was crucial to maintaining project schedules. At Bull Run, engineering design was accelerated in order to place a steel order and contract for fabrication shop space. Even though the structural engineers had barely recovered from the effects of Hurricane Katrina (see sidebar), they succeeded in providing enough design and detail to place a steel mill order and secure the shop space. Steel fabrication was also sequenced to meet the critical path construction activities.

By mid-2006 a strategic decision was made, based on total cost of ownership, to switch from an onsite limestone grinding system to preground limestone (PGLS) provided by a local quarry. This was a difficult decision, considering that the ball mills had already been purchased, fabricated, and were ready to be delivered, and the designs for ball mill building, structures, and the supporting system were complete. As a result, the ball mill grinding systems were eliminated, and a PGLS storage and feed system was designed, procured, and erected. This system is designed for truck delivery of the PGLS and features pneumatics to both unload limestone into the storage silos and transport it from the silos directly into the absorber.

Because project construction was at its peak at the time of the switch, the PGLS addition was organized and implemented, for the most part, as a standalone project, but it was integrated into the FGD project execution. This approach minimized impacts to the execution of the base FGD structural, mechanical, and electrical work.

Not Even a Hurricane Can Stop This Team

The Bull Run FGD Project was fully released for engineering and procurement in July 2005. However, in August 2005 detailed engineering was severely affected when Hurricane Katrina devastated New Orleans, home of the Bull Run EPC project engineering office. The 200-person project team soon scattered across the southeastern U.S. to find safety and places to stay.

Within two weeks of the hurricane, the staff regrouped at a temporary office established in Austin, Texas, the location of other corporate engineering staff. Temporary computers and software were acquired, although no documents, information, or data servers were available from the New Orleans office for about six to eight weeks. Design information was either uploaded when available or reconstructed when not. The project and office staff moved back to New Orleans in November 2005.

The Bull Run project was able to use a "Lessons Learned" database that incorporated information and data from prior TVA selective wet FGD systems. The Lessons Learned system includes the input of engineering specification change notices, change orders, and field information requests from all the TVA DCFS projects. Reviews were conducted by a Lessons Learned committee consisting of representatives from the engineering, procurement, construction, and start-up groups. The committee selects those items that will improve technical quality, save money, or shorten the project schedule and then communicates the results of those reviews to other wet FGD projects.

This sharing of information was very productive in terms of cost savings and schedule improvements. For example, one proposed project improvement that was developed from the Lessons Learned database concerned the fabrication and installation of the 126 piping laterals from the recycle headers to the absorber. For Bull Run, field verification and surveys were performed on each lateral prior to final shop fabrication. This process took into account construction tolerances and avoided costly field fit-up of each lateral.

The Bull Run project attained a recordable injury rate of 0.79 and a lost-time accident rate of 0.23 during a 3.5-year construction period with 1,767,852 man-hours expended. The project met all TVA safety goals and also had a period of more than 1,000,000 man-hours with no lost-time incidents, earning it a URS Washington Division President’s award. In addition, there were no recordable incidents during the final 18 months of the project’s peak construction period.

The team looked beyond the project at hand to ensure that work practices were as safe as feasible. During stack construction at Bull Run, a catastrophic fire occurred in a fiberglass stack liner on an FGD project at another utility. The project team initiated a safety stand-down to review procedures for the Bull Run fiberglass stack liner work and rewrote portions of them, as necessary, to further eliminate fire potential. No stack work resumed until all parties were satisfied with the new procedures and appropriate staff were retrained.

The project met all of TVA’s design and construction requirements and was placed in service a month ahead of schedule and within budget. The original project schedule included a total of three months of float, although two of those months were consumed early in the project because of Hurricane Katrina. The project schedule was then reevaluated and updated to maintain the original project completion dates while only changing intermediate milestone dates. The use of overtime and supplemental staff from other offices also helped regain lost time.