Barrages across the Solway Firth, Morecambe Bay, and the Mersey and Dee estuaries in the northwest UK could provide more than 5% of the nation’s electricity and meet half the region’s electricity, a study by engineers at the University of Liverpool has found.

The researchers, working in collaboration with Proudman Oceanographic Laboratory, examined ways to generate electricity from tidal sources of renewable energy in the Eastern Irish Sea. They investigated different types of tidal power, including barrages — which run from one bank of an estuary to another and guide water flow through sluices and turbines — using advanced two-dimensional computational modeling. They found that the most effective mode of generating electricity was "ebb generation," which involves collecting water as the tide comes in and releasing the water back through turbines once the tide has gone out, but "two-way generation" could also be a viable alternative.

The UK is struggling to meet a European Union renewable energy mandate of 15% by 2020. The government’s plans are centered on Britain’s excellent wind resources and call for building thousands of offshore wind turbines. They also focus on large-scale barrage projects, like the 10-mile barrage across the Severn estuary (Figure 5). But faced with protests from environmental groups, planning restrictions, an aging infrastructure, and a critical credit crunch, UK media report that, despite official optimism — Prime Minister Gordon Brown is expected to confirm the government’s commitment to the target in a new strategy this June — government insiders deem the plans out of reach. 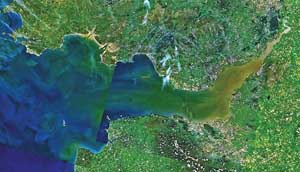 5.    Stemming the tide. The mouth of the Severn River, which opens to the Bristol Channel between southern Wales and Devonshire in southwestern England (shown here at low tide) has tidal variations of as much as 29 feet most of the year, and almost 47 feet in springtime. Only the Bay of Fundy in Canada has higher maximum tides. The UK government will likely fund a controversial 10-mile barrage, and smaller barrages, across the estuary. The £14 billion ($20.6 billion) project could produce as much as 8 GW, or 5% of the nation’s electricity. Source: NASA/Landsat-7 ETM

Barrages in the UK’s North West would not only help the nation meet its renewables target, but they also could strengthen its future energy supplies, which are currently thought to be critically low, Liverpool Professor Richard Burrows, from the Maritime Environmental and Water Systems Research Group, pointed out. "It will soon become paramount that all sources of renewable energy are fully developed," he said. "Unlike the wind, tides are absolutely predictable. The geographical location of the UK, and the seas that surround it, provide a great platform for marine renewable sources."

According to Dr. Judith Wolf of the Proudman Oceanographic Laboratory, a more feasible solution would require that the government diversify its options. "The problem with renewable energy generation is that it is intermittent; electricity can only be generated in line with the tidal flow," she said. "However the tide arrives in the North West around four hours after the Severn… so together they could increase the number of daily generation hours. In the future, other tidal energy schemes around the UK coast could extend the generation window."