POWER reported on the latest development of a new and improved engine: "The chief feature of the Corliss engine [from Kendall & Roberts, Cambridgeport, Mass.] is the valve gear, which consists of four cylindrical valves, two each for admission and exhaust, operated from a central swing or stud plate; the steam valves being liberated from their connection with the eccentric at some time during every half revolution; while the movements of the exhaust valves, with their connection, are fixed, their position with the eccentric remaining constant [Figure 1]. The position of both steam and exhaust valves is such as to give a short and direct passage for the steam into and from the cylinder, the exhaust valves drawing all the water of condensation entirely from the cylinder, rendering unnecessary the use of drip cocks or other contrivances to attain this end." 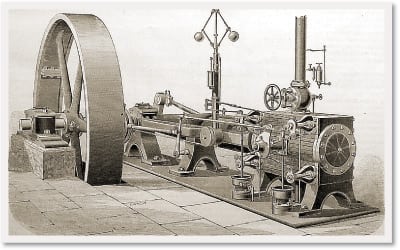 1. Kendall & Roberts introduced its new Corliss engine design in early 1886. It had four cylindrical valves, two each for admission and exhaust.

The editorial in this issue lamented the poor quality of lubricating and cylinder oils available at the time. "For purposes of lubrication where metal is working upon metal, sperm oil is the best, lard oil, second, neatsfoot, third, and tallow oil fourth. . . . The average quality of petroleum oils has been much improved within the past few years. . . . It is, I think, not too much to hope for, that within the next ten years or less, the qualities of pure petroleum oils may be so improved that, with improvement in shaft bearings of machines, and some provisions against accidental overheating, all lubrication may be possible with petroleum alone."

Boiler safety was the biggest problem facing the industry around the turn of the century, and then—as now—POWER was where engineers turned to combine technical information and shared experience into practical solutions.

The cover story of the March 1907 issue was "Calculating Butt-strapped Boiler Seams." The issue also included a 12-page special section on safety valve design. The editors noted that covering both topics was one way of "eliciting public interest in [worker safety]."

A conference report within the special section reveals how industrial safety has improved over the past century. "It is a matter of common knowledge that we are far behind European countries in this respect [safety]. It was said that the number of people killed or injured in the various industries of the United States amount in a single year to 500,000."

In 1907, the population of the U.S. was 87 million. Today, it is 301 million. A century ago, employers were seldom held accountable for injuries sustained by employees due to their own negligence—which always seemed to be the case. The editors of POWER had this take on the situation: "Take the usual damage-court estimate of the value of a human life at five thousand dollars, and damage for injuries usually exceeds those for deaths and where do you come out? And who pays it?"

Continuing on this issue, the editors wrote, "The entire public is interested in the success of [the industrial safety] movement. It may be your turn next, to be ground up in a railroad wreck, to be dropped in an elevator, to be hit by a trolley car, to be electrocuted by a live wire, to be hurled to death by a boiler exploding under the sidewalk upon which you are walking or under the building in which you work, or to be crushed in the wreck occasioned by a mass of iron projected from a bursting fly-wheel blocks away. These things may happen to anyone. If you are a workman in a factory where there is moving machinery or perilous processes the risk is the greater."

"Waukegan Station [Figure 2] of the Public Service Company of Northern Illinois has had its capacity augmented to 290,000 kW by the placing in operation recently of unit No. 5, a turbine-generator of 115,000 kW capacity at 85 per cent power factor [Figure 3]. 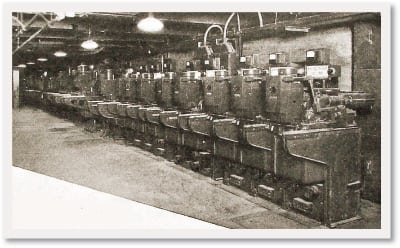 "The unit . . . has a number of features out of the ordinary. The turbine is of the two-cylinder tandem-compound reaction type with a double-flow low-pressure cylinder. Temperature and pressure conditions at the throttle are 650 lb. and 750 deg. F. Steam is withdrawn from the high-pressure cylinder at about 200 lb. pressure and after being reheated to the initial temperature is returned to the low-pressure cylinder. The general design of the unit is similar to that of the 65,000-kW machine installed in 1930 except that the generator voltage is 18,000 volts instead of 12,000. The generator rotor is said to be the largest forging ever made in this country, weighing 135 tons before machining."

Fifty years ago, the editors of POWER noted the trajectory of steam plant progress when commenting on the footprint of modern power plant designs. "Back in 1890, when POWER was a lusty 8-year-old, [this] boiler [Figure 4] was believed to be the world’s largest. Located in the Westinghouse Electric Light Plant at West 24th Street, New York, it was rated to deliver 30,000 lb of 200-psi steam per hr. 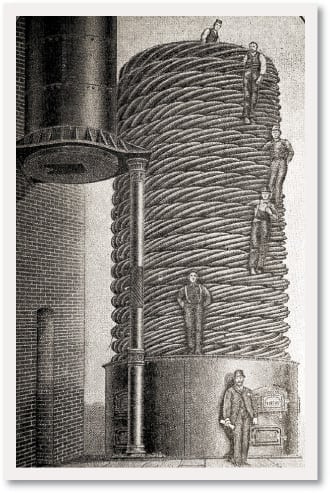 "The steam-generator to be installed at the new Breed Plant of Indiana & Michigan Electric Co, on the Wabash River south of Terre Haute, will deliver nearly 100 times as much steam—2.9 million lb per hr [Figure 5]. At the supercritical pressure of 3625 psi, and [temperature of] 1050 F, steam from this unit will spin the largest turbine-generator yet built, rated at 450,000 kW. 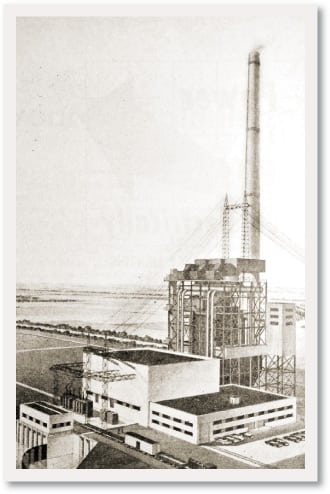 "Although not the world’s largest, this engine-generator [Figure 6] was an advanced design back in 1891 when it was installed at the 26th Street Station of the Edison Company, in New York. With double-acting cylinders of 18, 27 and 40 in. respectively, and a 30-in. stroke, it turned at a handsome 130 rpm to drive two 200-kW dynamos. The [original] POWER article describing it spoke of its compactness: We estimate it produced just under 1 kW per sq ft of engine room floor area. The Breed unit develops approximately 24 kW per sq ft of turbine-room area." 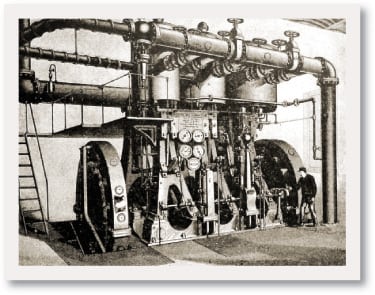