The cover story examined the latest in reciprocating engine technology: the Greene automatic cut-off engine (Figure 1). Here is how the editors described it: "The engine has a girder frame; guides case separate and dowelled and bolted to the bed plate; four-part main boxes; Porter governor. There are two steam and two exhaust valves, all flat slides, the steam valves being closed, when tripped by the combined action of a weight and the steam pressure on the large valve stems." 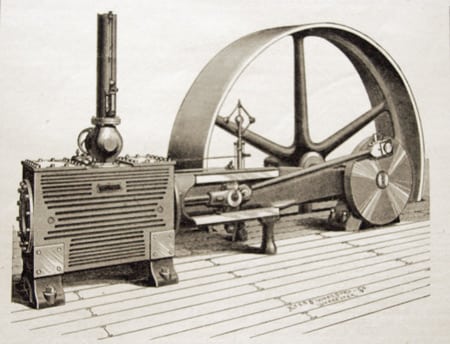 1. A Greene reciprocating steam engine, circa 1885.

The review continues by noting that "both the exhaust valves and the seats are convenient of access, and removable from the outside of cylinder. The valves receive their motion from a separate eccentric, thus allowing of easy adjustment, without interference with the steam valve mechanism. All the connections are on the outside and are few in number.

"A safety stop-motion is combined with the governor, preventing the admission of steam should the governor belt run off or break. The cross head gibes are directly opposite the centre of pin, thus avoiding any cross strain upon the piston rod; a lack of attention to this point has been the cause of many serious accidents."

The Vinton feedwater heater (for reciprocating steam engines) also was the subject of a short product review in this issue. "In the heater, the cold feed enters at C, rises to the top of B, overflows into the pan E, flowing to the centre, falls through to F and eventually to the large chamber below. The exhaust enters at L, and escapes at N. There is a safety float. The hot feed is withdrawn at H." If you look closely at Figure 2, you’ll see that the design looks similar to that of a modern deaerating feedwater heater. That’s remarkable because this unit predates early steam cycles by many years. 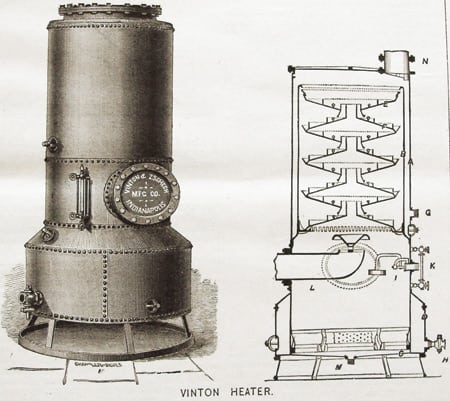 2. The 1885 Vinton water heater is similar to a modern deaerating heater.

A century ago, boiler explosions were far more common than they are today. An article written by the former chief inspector of boilers for Massachusetts examined their cause and effect via a case study.

"On Thursday morning, December 6, 1906, at a few minutes before seven o’clock, the boiler in the factory of the P.J. Harney Shoe Company, Lynn, Mass., exploded, demolishing a portion of the building. The factory was a four-story wooden building, and the resulting fire completely destroyed it. . . . As the explosion occurred before starting time, there were very few operatives in the buildings; still, at least 15 persons were injured or burned, but none fatally. The fine photographs herewith excellently portray the wreck."

The boiler that exploded was 10 years old. It was a "horizontal tubular type 72 inches in diameter and 18 feet long, made of ‘Clyde’ fire-box steel, a scant 3/8 of an inch thick . . . the horizontal seams being of the lap double-riveted type. There were ninety-two 31/2-inch tubes. . . . The pressure ordinarily carried was about 90 pounds."

The boiler had been fired lightly over the previous night and attended by a watchman who also held a fireman’s license. By morning, an engineer—also a licensed man—had arrived and taken charge. At the time of the explosion, he was standing in the engine room at the rear of the boiler house and was preparing to start an engine, but had not yet opened its throttle. The engineer survived the explosion with only some bruises and "a general nervous shake-up." Another engineer, visiting from the neighboring Owen Paper Box Co. factory, was cut about the head by debris "from the greater portion of the front course of the exploded boiler landing quite near him."

In reporting the incident, the editors of POWER wrote, "The accident is undoubtedly another of the many lap-seam explosions that have recently been recorded. This is the fourth very disastrous explosion in Massachusetts within a few years, known to be from this cause. . . . [A crack formed] under the overlap of the plate could not be discovered by inspection as could be given it. . . . The plate itself has all the appearances of extreme brittleness; pieces could be broken off short along the edge of the fracture with a few sharp blows of a hammer."

Figure 3 shows the front course and head of the boiler’s remains, with its tubes clearly visible in the background. The ASME Boiler and Pressure Vessel code, first published in the 1914 edition of ASME Transactions, has significantly contributed to public safety and standardized pressure vessel design since then. 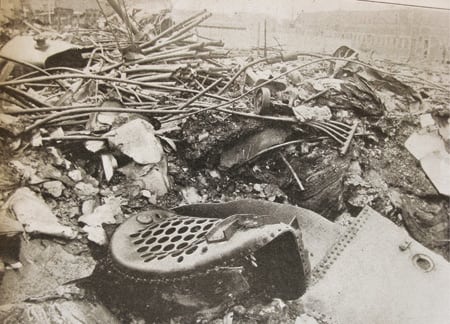 3. Boiler explosions were a too-common occurrence early in the 20th century.

"Recently placed in operation, this new unit [Figure 4] is the first of two 160,000-kW, tandem-compound turbine-generators for the Hudson Avenue Station of the Brooklyn Edison Company. It is supplied with steam at 400 lb. pressure and 730 deg. F. temperature by four boilers, each with a capacity of 530,000 lb. per hour, fired by the longest under-feed stokers yet made. The turbine exhausts into the largest single-pass condenser, which has a 101,000-sq.ft. surface. 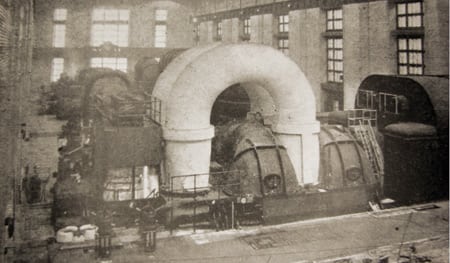 "Rated at 200,000 kva., the generator has the biggest 1,800-r.p.m. revolving field ever built. Completion of both units will raise the total installation of the station to 770,000 kW, giving it the greatest capacity of any steam plant in the world."

The Hudson Avenue Plant continued to produce power until 1997, when its generators were shut down by Consolidated Edison of New York as part of New York State’s retail electricity deregulation program. But steam production continued. The plant is located on the East River in the Dumbo (Down Under the Manhattan Bridge Overpass) section of Brooklyn, just east of the Manhattan Bridge.

Another item in this month’s issue noted that Massachusetts and Judson County (N.J.) had "favorable reports of work accomplished in reducing the smoke nuisance during 1931. . . . Smoke abatement has proved a real economical boon to owners of apartment houses, office building, industrial plants, oil refineries, and railroads, especially those who have made a really conscientious effort to reduce smoke.

"Bearing out the accuracy of our figures are those of David R. Morris, meteorologist of the Central Park Conservatory in New York City. Mr. Morris states that ‘sootfall’ in 1931, as measured by a delicately accurate instrument in the observatory, was 54 percent less than in 1930. Prevailing winds were from the West and Southwest, showing a decided improvement in smoke conditions in industrial Hudson County. Suspended fuel particles measure 1.84 tons per cubic mile in 1931 as against 3.97 in 1930."

POWER reported on the first pneumatic ash system installed on a pressurized furnace, as follows: "The job specifications called for pneumatic ash-handling when Philadelphia Electric Company recently added two 125,000 kW turbine-generators and two 875,000-lb-per-hour boilers to their Delaware Station. . . . The new, pulverized-coal-fired steam generators were to operate with a positive furnace pressure of 20 in. of water. And pneumatic ash-handling had never before been used with a pressurized furnace. Further, the utility specified dry handling to avoid the remotest possibility of polluting the Delaware River. Another design problem was that an exceptionally heavy metallic-like slag had to be conveyed." 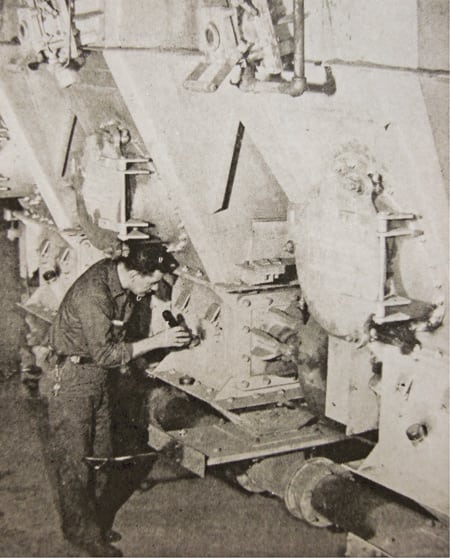 5. Pneumatic ash handling from a pressurized boiler was pioneered at Philadelphia Electric Co.’s Delaware Station in 1957.

Another story in this issue covered an October 1, 1956, report by the U.S. Atomic Energy Commission on "an impressive scope of activity in the field [of nuclear power]. Here’s the count: [reactors] completed, later dismantled—14; completed and existing—68; under construction—49; planned—83; total of all reactors—214.