The European carbon trading system experience suggests that North American generators should expect severely altered coal-fired power plant operating profiles if cap-and-trade legislation becomes law. In a groundbreaking study, Solomon Associates predicts the reduction in mean run time that North American generators should expect. The trends outlined in this study provide an overview of some of the broad challenges facing generators in moving to a carbon-constrained market environment.

In formulating a cap-and-trade bill to address climate change, U.S. regulators and legislators attempted to learn as much as they could from the experience of the European Union (EU), which implemented its carbon trading system in January 2005. As policymakers studied Europe, U.S. and Canadian generators grew skeptical about how much could be learned from the operating experience of European generators under a cap-and-trade program. Their concern was that any comparisons of European and North American plants would be fundamentally "apples and oranges" and, therefore, of limited value.

Despite the significant differences between the North American and European markets, Solomon Associates has identified a number of trends in European power unit performance since 2005 that may prove useful to U.S. and Canadian generators as they prepare for a carbon-constrained market. Most notably, North American generators may be surprised to see the abrupt changes in plant utilization that European units experienced with the introduction of carbon trading — a phenomenon likely to be repeated in the U.S. and Canada.

All data in the following analysis come from Solomon Associates’ proprietary database, utilized in our company’s worldwide benchmarking and consulting services. For this article, we studied data from participating power generation units from 2002 to 2008, concentrating on U.S., Canadian, and European generation, further segmented into coal-fueled steam and gas-fired combined-cycle gas turbine (CCGT) technologies for each region. For better comparison, cogeneration CCGT units that exported more than 20% of their total energy in steam were excluded. We started with an analysis of changes in fleet utilization and then evaluated changes in reliability, efficiency, and cost. The impact of the global economic downturn in 2008 is clearly visible in all the data.

Figure 1 shows power generation utilization as measured by net capacity factor (NCF) in North America and in Europe from 2002 to 2008. NCF is defined here as the ratio of the actual output of a plant in a given year to its output if it had operated at full net nameplate capacity throughout all hours of the year. During the study period, the North American market demonstrated heavy reliance on an aging fleet of coal units. The units operated with a low number of starts and high mean run time, suggesting that North American operators were employing these units in a baseload capacity. Meanwhile, the utilization of North American CCGT units declined during the period. 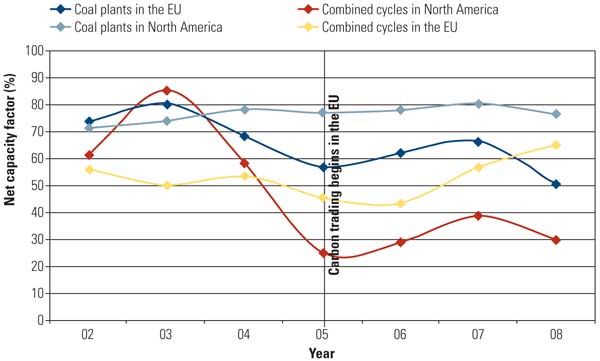 European units, by contrast, demonstrate a completely different pattern. After the initiation of carbon trading, the utilization of CCGT units increased dramatically and, in 2008, exceeded that of coal units for the first time. The utilization of European coal units, meanwhile, declined significantly during the study period. The mean run time of European coal units declined by 35%, and the number of starts increased threefold.

On a comparative basis, European coal units experienced more than six times as many starts as North American coal units by the end of the analysis period, and their mean run time was approximately one-third that of North American units. The data indicate that European coal units that were designed and formerly operated as baseload units are now being driven to intermediate duty, with many of them starting much more frequently to respond to their new role. This reorientation can largely be attributed to the impact of carbon trading, with the integration of renewable capacity in the market acting as a secondary influence.

Trends in Reliability and Efficiency

Changes in utilization patterns, in turn, have influenced reliability, efficiency, and cost. As shown in Figure 2, the unavailability of European coal plants as measured by equivalent unavailability factor (EUF) increased dramatically during the study period, compared to a modest increase among North American units. EUF is defined here as the fraction of maximum generation that could not be produced due to unit deratings and planned and unplanned outages. While planned outages increased slightly for both European and North American plants during the period, the increase in unavailability among European coal plants was driven by a doubling of unplanned outages. 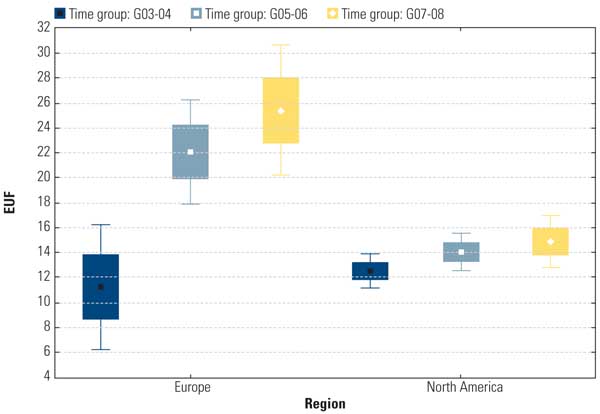 2. Cycling plants increases outages. Equivalent unavailability factor (EUF) for coal plants in the EU has steadily risen since the EU ETS commenced operation in January 2005. At the same time, there was a modest increase in EUF in North America. This indicates that the increased cycling of EU coal plants has also increased the periods of time when the plants are out of service for repairs or are derated. Source: Solomon Associates

A significant divergence also exists in heat rate between North American and European units. Throughout the analysis period, European coal plant heat rates were better than those of their North American counterparts. Although there were no clear trends in the heat rate of North American CCGT units during the study period, the heat rate of U.S. and Canadian coal units worsened substantially. This is likely the result of heavy usage and a focus on availability to monetize a fuel cost advantage rather than additional outage time to pursue heat rate improvements. By contrast, the heat rate of EU coal units increased only slightly — and, notably, the spread in heat rates among units narrowed considerably after cap and trade took effect. European CCGT units, meanwhile, show a trend toward improved heat rates during the period, driven by improved heat rates of individual combustion turbines due primarily to higher net operating factors. Carbon trading appears to be driving the convergence, as well as improvement in heat rate among European units as a result of the relationship between good fuel conversion efficiency and lower carbon emissions.

Figure 3 shows that total cash less fuel per megawatt-hour (TCLF/MWh) steadily increased for both North American and European coal units during the study period, but cost increases were most pronounced in Europe after carbon trading went into effect. TCLF/MWh increased by 60% for European coal units, compared to 30% for North American units, during the study period. The overall trend of increasing TCLF/MWh was driven by both rising costs and reduced generation. European CCGT units experienced an increase in cost after the beginning of carbon trading, but this leveled off as utilization increased. There is no clear trend in the cost for North American CCGT units. 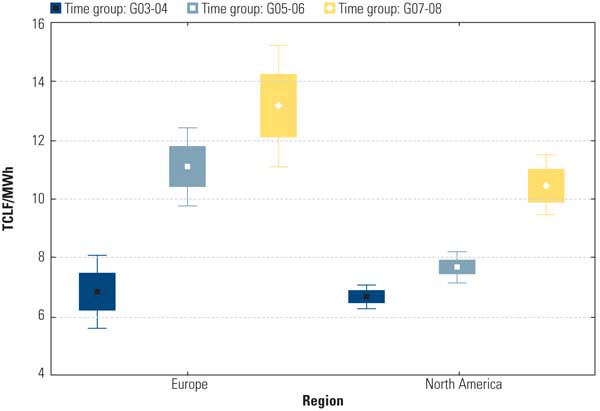 Figure 4 illustrates changes in the ratio of overhaul plus long-term service agreement spending to non-overhaul spending among North American and European units. This approximates the ratio of long-term to short-term maintenance costs. Solomon Associates’ prior research indicates that planned long-term spending yields much longer lasting benefits to operators than unplanned short-term spending. During the study period, North American coal units moved toward a higher percentage of long-term spending, largely as a result of increased dependence on coal and the need for higher market availability.

4. Opposite investment decisions. North American operators continue to invest in their coal plants less than in their combined-cycle plants. In the EU, the exact opposite is the case. A means of measuring this investment is dividing the sum of the overhaul (OH) costs plus the cost of any long-term service agreement (LTSA) divided by the non-overhaul maintenance expenses. Source: Solomon Associates

Similarly, European CCGT units trended to a higher ratio of long-term spending because this technology is increasingly used for baseload generation. European coal units also moved to a higher percentage of long-term spending during the period, but in this case, they were likely doing so in response to higher-than-acceptable unplanned unavailability.

Total work hours required to operate and maintain units trended upward for both European and North American coal units, and downward for CCGT units, during the study period. Additionally, operators on both continents trended toward using a higher ratio of contractor to in-house personnel.

Lessons for U.S. and Canadian Units

Clearly, carbon trading has had a significant impact on the utilization, reliability, efficiency, and costs associated with European power generation units. Carbon trading in Europe has redefined baseload and intermediate-load fuel and generation technology. North American coal and CCGT units will likely see similar changes. Figure 5 forecasts what North American units might expect in the area of coal-unit unavailability should European trends carry over to the North American market after a cap-and-trade regime takes effect. 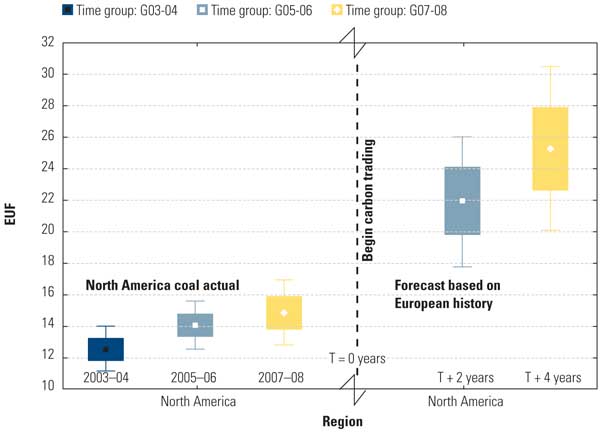 Most North American coal units are not designed for intermediate-load duty and, in fact, have never operated in this manner. As a result, personnel at the majority of North American coal plants have not been trained for intermediate-load operations. In fact, with the low number of starts at these coal units, it is not unusual for an operator or crew to go a year or more without experiencing a start-up. Therefore, unit operators would be advised to adjust training programs and to plan for changes in maintenance programs in anticipation of a cap-and-trade regime.

Additionally, with the marked increase in use of contractor instead of in-house personnel, operators would be prudent to ensure that there is a stable supply of qualified contractor personnel to support their potentially changing operating plans. Because North American coal units are aging and have been run at high capacity while implementing costly environmental controls, operators should also have a plan to recover from any deferred maintenance spending.

In general, European operators who quickly recognized and responded to new constraints and dispatch demands by modifying unit flexibility, training programs, and maintenance practices have achieved better performance than their peers. North American operators would be wise to learn from the European experience and to begin planning for change. Those who do not adapt will likely see fleet performance suffer; in some cases, it may take years to recover. European operators, meanwhile, can expect additional changes to the carbon trading market and would be advised to incorporate this into their long-term planning.

A final lesson for North American generation owners concerns portfolio risk associated with currently installed technology and fuel type. Generators whose portfolios are heavily dependent on a single fuel or technology can expect to experience far greater challenges in adjusting to a cap-and-trade environment than operators who have greater flexibility to transition from coal to CCGT, for example. Although the changes that North American plants would see under carbon trading might not directly parallel the experiences of European units, there is little doubt that the challenges would be significant. Flexibility and preparation will be critical to market adaptation.