Battery storage has emerged from the fringes of the power sector to challenge both industry conventions and traditional generation. Where it goes from here, however—the future of battery storage technology—is a matter of some debate.

Both storage firms and energy storage experts at the Energy Storage North America (ESNA) conference in San Diego Oct. 13-15 were effusive in their praise of battery storage’s potential.

Pratima Rangarajan, general manager of product and engineering for GE’s new storage business Current, who spoke at the opening keynote on Oct. 13, took direct aim at one of her parent company’s core products.

“Energy storage is now competitive on price with the lowest 20% of combustion turbines, and that number is constantly increasing,” she said.

GE, though, is far from abandoning gas turbines. Instead, it wants to pair the two, along with wind and solar, to create a firmer, more reliable grid. Batteries can enhance the performance of existing peaking plants, Rangarajan said.

“They’re actually providing a service to the grid that’s more efficient and valuable than peaker plants,” he said.

Battery company executives who spoke to POWER at ESNA described a range of technologies that are coming onto the market.

Dave Vieau, president and CEO of Vionx, said the company has several megawatts of capacity in its pipeline, with the first deployment at a U.S. Army post in Massachusetts coming online earlier this year.

Vieau said one advantage of flow batteries is the long lifetime—a system can operate reliably without significant power loss for 20 years.

With so many companies developing flow batteries, differentiation is becoming an issue. Portland, Ore.–based Energy Storage Systems (ESS) believes its advantage is in its low-cost, non-toxic, iron-based electrolyte. The company recently closed $3.2 million in financing that will help enhance its production capacity.

ESS Vice President of business development Bill Sprouli told POWER its first deployment, as part of a microgrid in Northern California, would be coming online in early November. ESS is focusing on longer-duration applications, he said.

“I think the need to penetrate more renewables onto the grid is really going to create a need to bring more time-shifting applications,” Sprouli said.

Lithium-ion batteries are seeing technological improvements as well. Ojai, Calif.-based Simpliphi Power has introduced a li-ion battery that does away with two of the biggest challenges confronting the technology: its environmental impact and its risk of thermal runaway—a phenomenon that results when a failing li-ion battery cell generates enough heat to cause other nearby cells to fail and thereby generate more heat in a rapidly expanding cycle.

Simpliphi CEO Catherine Von Burg explained to POWER that its batteries use a lithium-ferro-phosphate chemistry that offers the same performance as more conventional li-ion batteries, but without the use of cobalt.

The company uses a proprietary battery architecture and management system that delivers 98% efficiency yet prevents thermal runaway, a problem that can cause li-ion batteries to catch fire during use. (Problems with onboard li-ion batteries catching fire briefly grounded Boeing’s new fleet of 787 jetliners in 2013.) 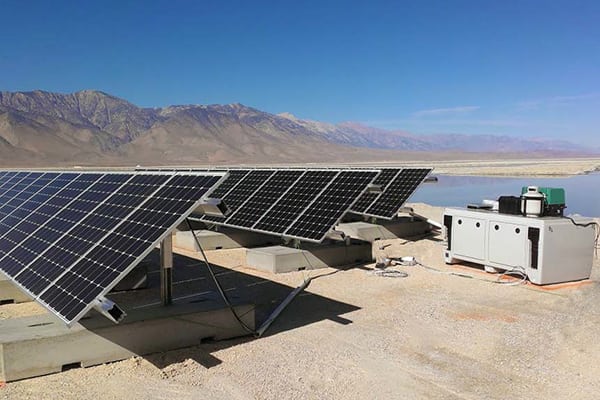 1. Desert high. Simpliphi batteries are used to provide backup storage for this solar photovoltaic system in Owens Lake, Calif., built for the Los Angeles Department of Water and Power by Zerobase. Courtesy: Zerobase/Simpliphi

Finally, the humble lead-acid battery may be poised for a comeback thanks to new technologies that have addressed its traditional disadvantages of poor performance at a partial state of charge (PSOC). Advanced lead-acid battery company Ecoult said its hybrid battery/ultracapacitor design can maintain 90% to 95% efficiency at a PSOC at a lower cost than li-ion batteries.

Where Is the Future of Battery Storage?

What’s on the horizon? Two battery experts at ESNA had some thoughts on that.

“It’s clear we’re moving beyond the growth stage, focused on bringing down costs, and starting to bring forward new capabilities,” she said.

Meng noted that because grid-scale applications normally have little in the way of space constraints, the larger footprint of these technologies compared to li-ion is not as much of a consideration as it would be in residential and commercial applications.

Still, li-ion technology has a lot of potential left to exploit. Meng said she’s confident that increases of at least 20% to 30% in energy density are feasible for the next generation of li-ion batteries.

“The energy density for lithium-ion batteries at the molecular level we can at least double,” she said.

[Update: An earlier version of this article misstated the chemical composition of Simpliphi batteries. They do not contain cobalt.]