The rapid expansion of shale gas production in the United States as a result of improved hydraulic fracturing technologies has fundamentally—and likely permanently—changed the North American natural gas sector. A report released in July 2011 by the U.S. Energy Information Administration (EIA) estimates that there is approximately 750 Tcf of recoverable natural gas in the shale plays of the Lower 48 states alone. The development of this substantial domestic energy resource holds great promise for the United States.

Shale gas resources will have a dramatic impact on the North American power industry. The EIA reports that last year more than 7 Tcf of natural gas was consumed by the power industry. If consumption rates remain relatively constant, domestic shale gas could provide 100 years of supply to the industry, based on current estimated reserves (Figure 1). 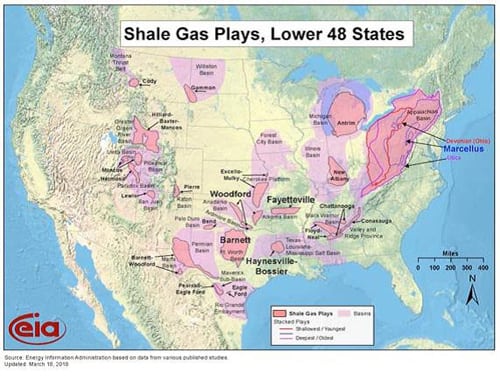 Major pipeline and gas storage infrastructure is being constructed to get the volumes of gas to consuming markets. While these new projects are facilitating the transportation of shale gas, many pipelines are facing challenging shifts in transportation paths and proposing changes to rate structures to account for such shifts.

However, as a result of this rapid expansion, federal and state regulators have questioned the adequacy of existing regulations that govern shale gas production and hydraulic fracturing. Members of the U.S. Congress also have raised environmental and transparency concerns and have proposed legislation in an effort to address such concerns.

After briefly discussing hydraulic fracturing, the development of new pipeline infrastructure, and a number of the environmental issues that have been raised in response to prolific drilling, this article provides an overview of federal legislation, federal and state agency action, and pending litigation that may impact domestic shale gas development.

What Is "Hydraulic Fracturing"?

Hydraulic fracturing is not new by any means. The process was first used commercially for a natural gas well in 1949. Hydraulic fracturing, or "fracking," is a process by which water, with a very small amount of sand and chemical additives, is injected into a well at high pressure, creating fissures in the shale rock. These fissures are "propped open" with a propping agent in order to release the natural gas trapped inside. The fracking fluid is then pumped back to the surface for recycling or disposal.

Technological advances in the fracking process have led to the more recent expansion of shale gas production. The practice has stirred controversy as it has become more widespread, particularly in regions of the country without a robust and well-developed oil and gas industry. However, such challenges are common in new industries and should not be viewed as fatal to the future of shale gas production.

Traditionally, well operators and contractors have been reluctant to disclose the chemicals used to create the fracking fluids, citing proprietary trade secrets. In recent months, an increasing number of states, led by Wyoming, have mandated the disclosure of chemicals used in the fracking process. Partly in response to this, industry participants voluntarily have begun disclosing fracking chemicals on the website FracFocus.org. This online procedure has become sufficiently standardized such that Montana recently issued a rule stating that operators who post their fracking fluids to the FracFocus.org website will be deemed in compliance with the state’s disclosure requirements. Other states, like Texas and Louisiana, are following suit. Although the industry viewed fluids disclosure as a major problem initially, it appears that shale well operators are accepting that disclosure is becoming standard industry practice.

Water use and disposal present more complex problems for the industry. In general, states are the primary regulators of water use and, in fact, the basic legal principles for water usage vary from state to state. Industry participants therefore face a patchwork of state regulatory schemes across the country. On top of this complex legal landscape, federal-state compacts such as the Delaware River Basin Commission may also govern water withdrawal, quality, conservation, and other matters.

Critics also have raised potential water contamination as an issue. As the fracking location within a shale gas well is many thousands of feet below the surface (depending on well location and shale formation), it is generally accepted that fracking fluids are highly unlikely to migrate up through thousands of feet of bedrock and into water aquifers or potable wells near the surface. In fact, U.S. Environmental Protection Agency (EPA) Administrator Lisa Jackson has stated that there is no single proven case of fracking impacting water supplies. In the rare cases of contamination of surface and near-surface waters, the contamination likely was due to well completion failures, not the fracking process. Thus, ensuring proper well completion is of paramount importance to prevent any such contamination.

Disposal of flowback water is another issue facing shale well operators. Each state has different requirements and many are developing creative, environmentally safe means of disposal. Some states permit subsurface injection of the used fracking fluids as their default method of water disposal. Other states allow "land application," where the fluid is spread out and allowed to both filter downward and evaporate. One interesting example is West Virginia, where land application of the flowback is utilized to extract the brine or salt from the fluids for use on winter roads.

Notably, reuse of flowback water has become more common. In this process, the operator captures the flowback water, tests its composition, and processes it for future use at another fracking job. As expertise with fracking fluid processing develops, it is likely that reuse will become more common in the industry, particularly given states’ environmental concerns with other means of disposal.

Infrastructure for shale gas production continues to develop. Throughout the Northeast and the Appalachian region, major interstate pipelines have requested authority from the Federal Energy Regulatory Commission (FERC) to expand their facilities. FERC remains a strong proponent of pipeline and storage infrastructure. In fact, from 2009 to 2011, FERC certificated 2.8 Bcf/d of new capacity in the Marcellus shale region alone.

Several major new infrastructure projects have been proposed that likely will change gas flows and pricing in the Mid-Atlantic and Northeast. National Fuel Gas Supply has proposed to implement bi-directional flow to enable transportation of 320,000 dth/d of Marcellus gas for export to Canada. Texas Eastern and Algonquin pipelines will build new facilities to carry 800 MMcf/d into Manhattan. Notably, this is the first pipeline expansion into Manhattan in decades. In addition, a number of pipelines that previously were transportation lines have proposed to convert to gathering facilities in order to facilitate development of the shale gas resource.

Projects also are under way to provide storage capacity for the new gas supplies. Tallulah Gas Storage received certification from FERC to construct and operate a new salt cavern storage facility in northern Louisiana with a total capacity of approximately 11.4 Bcf and a peak deliverability of 525 MMcf/d. This project will provide storage for new supplies from the Haynesville, Barnett, and Fayetteville shales.

There has been much debate over whether and how the federal government should regulate shale gas development and fracking. Three federal agencies have been at the heart of this debate: the Department of Energy (DOE), the EPA, and the Department of the Interior (DOI).

The EPA and DOE have focused on the potential regulation of fracking under the Safe Drinking Water Act (SDWA), which currently exempts most fracking operations. The EPA, which has authority to regulate operations that use diesel, is currently drafting a guidance document that is anticipated to state that fracking operations using diesel fuel as a component of the fracking fluids will be required to obtain a Class II Underground Injection Control permit under the SDWA. The agency already has posted policy language to this effect on its website, and industry groups have challenged this in federal court, arguing that the agency must go through a formal rulemaking procedure. The EPA also is considering wastewater disposal methods under the Resource Conservation and Recovery Act and is developing guidance on the construction of disposal pits and impoundments for releases of wastewater from fracking operations.

The DOE’s Secretary of Energy Advisory Board (SEAB) has been tasked with making recommendations to improve the safety and environmental performance of hydraulic fracturing. It is scheduled to make its initial recommendations to DOE Secretary Steven Chu by late summer and issue a more comprehensive report before the end of 2011. Recently, the SEAB has publicly suggested that the fracking operations exemption under the SDWA may need to be reconsidered.

The DOI’s Bureau of Land Management is considering a policy that would require fracking companies to disclose the components of their fracking fluids when operations take place on public lands. The agency’s Forestry Service recently issued a position statement recommending a ban on fracking in the George Washington National Forest. Industry has responded critically out of concern that this indicates the Forestry Service’s de facto position is no drilling in national forests.

Lawmakers on Capitol Hill also have been crafting legislation designed to increase federal regulation of fracking. One such bill is the Fracturing Responsibility and Awareness of Chemicals Act, or FRAC Act. While passage of such legislation is unlikely given the current composition of the Congress, it is likely to remain a hot-button issue. As recently as August 8, Democratic members of Congress encouraged the EPA to broadly define "diesel fuel" in its ban on diesel in frack fluids. In the last session of Congress, the House of Representatives commissioned the EPA to perform a study of the fracking process and its impacts on drinking water and groundwater. The agency’s scope of study is ambitious—some have argued too ambitious—proposing to undertake a complete lifecycle analysis of shale gas impacts on drinking water and groundwater. Initial research results are anticipated in late 2012, and the final report is slated for 2014.

A number of lawsuits related to shale gas and fracking operations have been filed around the country. These lawsuits run the gamut from challenges to agencies’ regulations or lack thereof, to suits against producers and service companies for water contamination and tremors.

One of the more significant cases—and one that should be watched—is a suit recently filed by the New York State Attorney General against the U.S. Army Corps of Engineers and other federal agencies. The suit alleges that the Delaware River Basin Commission failed to comply with the National Environmental Policy Act by issuing regulations governing natural gas development in the basin without first completing a full environmental impact statement.

A similar suit against federal agencies has been filed in federal district court in Arkansas alleging that drilling in the Ozark National Forest is proceeding without appropriate environmental reviews. Also in Arkansas, landowners have filed suit in federal court against several producers, seeking class action status and alleging that the fracking process has resulted in water, air, and soil contamination, as well as minor earthquakes.

As shale gas production ramps up, more lawsuits are likely. Producers, drilling companies, and governments alike should be prepared to respond to both procedural and substantive challenges.

The numerous benefits resulting from the development of domestic natural gas resources make it likely that producers and drilling companies will continue to successfully address the environmental concerns that have been raised. Those same benefits also make it unlikely that federal or state governments will enact overly restrictive laws or regulations on shale gas development. In short, despite short-term challenges, shale gas production in the U.S. will continue to expand and become an increasingly important component of the nation’s energy supply.