This July, an underground steam pipe near Manhattan’s Grand Central Terminal ruptured and spewed a scalding brown geyser of steam and debris higher than the nearby 77-story Chrysler Building. The blast, which injured 30 people, created a 40-foot crater at street level that swallowed a tow truck. A similar explosion in 1989 killed three people.

Mayor Bloomberg did his best to steady New Yorkers’ frayed nerves by blaming the mini-volcanic eruption on an aging labyrinth of underground steam pipes, some nearly a century old. "There is no reason to believe this is anything other than a failure of our infrastructure," said Bloomberg. The 24-inch-diameter pipe had been installed in 1924 by the old New York Steam Corp., which started selling steam to Manhattan customers in 1882. Today, 105 miles of active steam lines remain under the borough’s streets.

Design of underground steam mains was the subject of a special report in the April 16, 1918, issue of POWER (see figure). The editors noted: "There is no item of greater importance concerning underground heating mains than the protection of the piping from outside moisture. The presence of water in the conduit, especially if it reaches the piping, greatly increases the heat loss and the deterioration of the pipe and insulation, therefore conduits should be thoroughly under drained with tile laid in coarse gravel of crushed stone, special care being taken to provide a free outlet for the drains to keep the trenches clear of water." 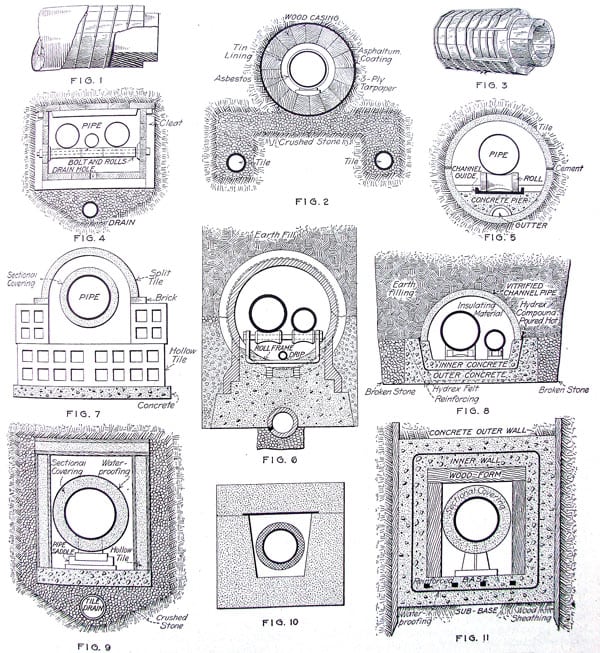 An illustration page from the 1918 POWER special report on underground steam main design.

The report also noted that the "insulating material… should be especially adapted to conduit work, such as granulated cork, fossil earth, asbestos fiber and found sponge. In the case of brick and concrete tunnels the pipes should be covered with some form of sectional covering that has the property of resisting dampness as well as preventing the loss of heat, for tunnels [will] be dry in winter, when heat is on, wet during the summer, when steam is shut off, [so] moisture is likely to gather." The authors also said that a well-designed tunnel was good for at least 35 years.

To explain the 2007 explosion, a Con Ed spokesman said, "heavy rain can cause a ‘vapor condition’ if rainwater seeps into a steam pipe, causing the steam to condense." Tests for asbestos contamination of buildings and residents are continuing.