Production from Wyoming Powder River Basin (PRB) coal mines ended last year with a increase of only about 1.1%, reflecting a record 451.3 million tons, according to the Department of Energy’s Energy Information Administration.

Production of PRB coal spiked with a record 10% growth in 2006 following two derailments on the PRB’s main triple-track line in 2005. Much of the 2006 spike was attributed to utilities rebuilding coal stockpiles that had been chewed down while the tracks were being repaired.

Reduced fuel supplies to coal-hungry power plants put significant pressure on BNSF Railway and Union Pacific to expand and improve rail facilities. The myriad lawsuits that followed when electrical production was curtailed at many plants also may have motivated the two railroads to improve their ability to deliver coal on time. To their credit, the two companies have since spent more than $1 billion to beef up their coal transportation systems, focusing on Wyoming’s Powder River Basin (Figure 1).

"The railroads made the investment to get the additional capacity out," said Douglas Wagner, Gillette store manager for Wyoming Machinery, a heavy equipment contractor. "That showed they had the belief in the coal industry to put in that additional capacity."

"The railroads are now shipping for test burns again, and they hadn’t done that for several years," Wyoming Mining Association Executive Director Marion Loomis said. "Now that they put so much effort into increasing their capacity it allows for new test burns, and I would hope that leads to new permanent demand for Wyoming coal."

Now the challenge for the railroads is to turn their new track capacity into tons of coal shipped. The PRB mines are reported to have hired another 500 workers between the third quarters of 2006 and 2007. That’s an increase of about 10% to the existing workforce, according to figures from the Mine Safety and Health Administration (MSHA).

Hiring gains were led by Arch Coal and Peabody Energy, which accounted for 300 of the staff additions. Both energy companies continue to report they are in an aggressive hiring mode and that labor shortages are hampering production (Figure 2). 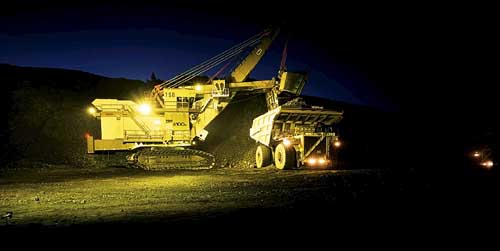 Arch-owned Black Thunder Mine employs 1,088 people — more than any other mine, according to MSHA data. It is followed by Peabody’s North Antelope-Rochelle, which has 955 workers.

But PRB Coal Demand Is Flat

The question remains: Why is demand for PRB coal expected to remain flat for the next few years (Figure 3), despite massive cash investment and large staff additions? The answer becomes clearer when viewed from the perspective of an operating coal-fired plant. 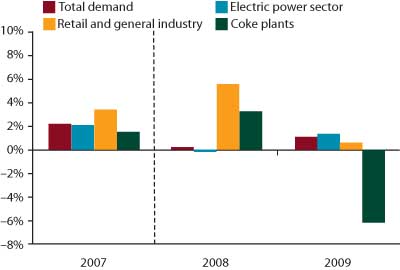 Coal-fired generation remains a key baseload commodity while the vast majority of plants, regardless of age, continue to operate with moderate to high availability factors. There is little additional generation to be squeezed from generating assets that average more than 25 years old. If existing assets can’t be run harder and the fuel piles are full, then there is little growth potential for coal sales in this market. In fact, plant efficiency improvement projects so common today also tend to flatten out coal consumption.

PRB coal is the fuel of choice for most new coal-fired generation projects in the U.S., but some utilities have taken steps to loosen the handcuffs that forced adoption of the low-sulfur fuel in the first place. One approach is to include additional emissions-removal capacity in scrubber and selective catalytic reduction retrofit construction specifications to give fuel buyers some negotiating room with high-sulfur coal suppliers. The thinking is that if the plant’s emissions are made independent of the fuel source, then fuel selection becomes purely an economic choice. Of course, plant operators know there are many more issues that go into a fuel change than just the price of coal, but that’s a discussion for another day.

The remaining opportunity for PRB coal market growth relies on an increase in demand fueled by the construction of new coal-fired plants. Coal critics have claimed that a new generation of plants has died on the vine, but the data clearly show plenty of project development activity. Yes, a number of high-profile coal projects, including integrated gasification combined-cycle (IGCC) – based ones, have been delayed or cancelled. But the data seem to show that many more projects have been approved and are under construction than have been cancelled. Nevertheless, news organizations are much more willing to give front page coverage to the cancellation of a coal plant than to a successful start-up.

The best information from the DOE shows that there are more than 120 coal-fired plants currently under construction or under serious development across the U.S. The breakdown of new plants according to status and capacity is:

Following is a partial list of coal-fueled plants currently under construction that we are tracking. We’ve included the plant’s location and the year it is scheduled for commercial operation: