The move by Kohlberg Kravis Roberts & Co. (KKR) and Texas Pacific Group (TPG) to buy the Dallas-based utility involved some secret negotiations among TXU, the buyers, and two national environmental groups — Environmental Defense (ED) and the Natural Resources Defense Council (NRDC). ED’s very active and vocal Texas chapter has been leading the charge against TXU’s coal plans, largely on the basis of their carbon dioxide emissions. Goldman Sachs also is involved in the TXU buyout.

The San Antonio Express-News reported, "To get the groups to sign off, the equity firms promised to eliminate plans for eight of the coal plants and take several more environmentally friendly steps, including reducing TXU’s carbon output to 1990 levels by 2020 and backing a federal cap-and-trade system for global warming emissions." That’s a reference to the U.S. Climate Action Partnership, which is backed by several large U.S. utilities, including Pacific Gas and Electric Co. and Duke Energy.

Dan Bakal, who follows the electricity power industry for Ceres, a network of green investors, told the San Antonio newspaper, "The proposal elevated awareness across the board on the issue and I think it will have an impact on the industry and on Wall Street."

In addition to scrapping the coal plants and reducing carbon dioxide emissions, KKR and TPG agreed to increase annual spending on energy efficiency to $400 million; double TXU’s already significant investment in wind power; cut its NO x, sulfur dioxide, and mercury emissions by 20%; and create a Sustainable Energy Advisory Board, with membership that includes representatives from ED and NRDC.

Many Texas greens aren’t impressed with the environmental end of the deal. "We don’t understand how TXU’s intention to go forward with some new coal plants jibes with its commitments on energy efficiency and renewables," said the Sierra Club’s Ken Kramer.

TXU will issue a request for proposals for coal gasification technologies with carbon capture. The new advisory board will review the proposals. One of the new IGCC projects will gasify Powder River Basin (PRB) coal, and the other lignite. All of the cancelled units would have burned PRB coal.

"We have been listening to and following the lead of Governor [Rick] Perry, legislators, and interested parties all over Texas," said TPG’s Michael MacDougall. "We are announcing our intention to dedicate two sites for these new facilities. We are inviting representatives from communities across the state to contact the company with their views on various site options. It’s time to start exploring how we bring better technology to Texas so we can generate clean, affordable, reliable power in the future."

In North Carolina, state regulators delivered a blow to coal earlier this year when they authorized Duke Energy Carolinas to build only one of two proposed 800-MW coal-fired generating units at its existing Cliffside site. Opponents, including the Sierra Club, argued that Duke was trying to get approval for the new units so they could be grandfathered if federal carbon caps come into effect.

The North Carolina Utilities Commission (NCUC) voted 6-1 to limit Duke’s plan to one unit. In dissent, Commissioner Robert Owens Jr. said he would have denied the entire Duke application. In a press release, the commission said Duke "carried its burden of proof as to the need for one 800-MW unit at the Cliffside site," but not for a second unit.

When it applied to the NCUC in mid-2005, Duke said it would combine building the new units with shutting down four old coal-fired units with a combined capacity of 198 MW at the Cliffside station. The result would have tripled the facility’s total coal-fired capacity from 772 MW to 2,172 MW. Now, the site will be rated at 1,372 MW.

Under the terms of the NCUC order, Duke still will have to shut down the four small units. The utility also must commit to apply at least 1% of its statewide revenues to energy-efficiency programs, a total of about $34.5 million.

In a press release, Duke CEO James E. Rogers (Figure 1) said, "We will review the complete order once it is issued. We’re not making a decision until we see the final overall cost estimate for the project as well as the conditions on the environmental permit. It is only prudent for us to make a decision after all these key facts have been reviewed and validated."

Canaries in the Coal Mine

What do coal plants have to do with glaciers? I recently spent two weeks in southern Patagonia, which has plenty of the latter. I suppose the field trip now qualifies me to offer insights on global warming, based entirely on anecdotal evidence. If that kind of evidence is good enough for the Intergovernmental Panel on Climate Change, it’s good enough for "The Coal Patrol."

It was a bad summer in Patagonia: cold and windy, with intermittent blasts of sleet and snow. Folks from Ushuaia to Puerto Natales said that the past few summers have been cooler than usual. Winters, I was told, have been drier than usual, though not necessarily warmer. Most of the Patagonians I talked to said they prefer winter to summer, because summer is way too windy (and that’s how I found it).

Then there are the glaciers, which some environmentalists consider barometers or thermometers of global warming. Chile has wonderful glaciers, from the fjords along the Beagle Channel’s "Avenue of the Glaciers" that calve into the sea to the spectacular Torres Del Paine National Park, with classic examples of hanging glaciers. The large Patagonian glacier sheet is visible as the plane flies from Punta Arenas to Santiago (Figure 2). 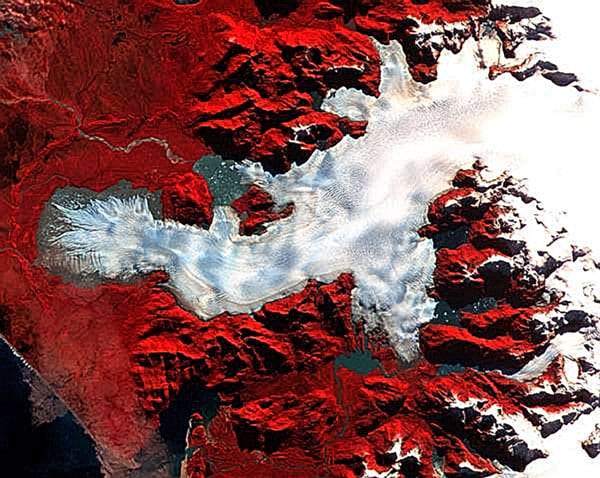 The glaciers along the Chilean fjords have been shrinking of late. Local experts told me their forward edges are now at points not seen since the 1830–1860 glacial retreat.

If man-made global warming is causing today’s glacial melting, what caused the 19th-century phenomenon? Could there be natural cycles to glacial advances and retreats, perhaps tied to other natural cyclic activity, such as sunspots? There’s lots going on that might not have anything to do with the deeds of mankind, including regional climate changes and short-term weather fluctuations such as El Niño and his nasty sister, La Niño.

Scientists at the National Oceanic and Atmospheric Administration (NOAA) reported in late February that they have detected the onset of La Niño which might bring increased hurricane activity in the Atlantic this year and drought conditions in the West. NOAA climatologists said they are seeing "sea surface temperature anomalies" in the eastern Pacific, which signal the arrival of La Niño The same signs followed an El Niño phenomenon that produced the warmest December across the U.S. in 2006.

Glacial melting has gotten a lot of attention recently, with much of it focused on a dramatic retreat of glaciers in Greenland. But the subject is more complex than it has been portrayed in the popular press.

For example, Ian Howat at the University of Washington in Seattle recently reported in Science magazine that two of Greenland’s largest glaciers have melted, and then regained their previous size, over a very short period. Howat’s paper came a year after another article in Science said that discharges from Greenland’s glaciers had doubled between 2000 and 2005. Some scientists speculated that this was a consequence of global warming, and that melting would continue at ever-faster rates. Later data upended that view, however.

The earlier results, Howat noted, were based on "snapshots" taken five years apart. As I learned in graduate school, even a dozen data points may not be enough to plot a trend. In Greenland, there were only two sets of data. "Did an equal amount of discharge occur every year?" Howat asked. "Did it happen all in one year? Is there a steady upward trajectory? We don’t know," he admitted.

"While the rates of shrinking of these two glaciers have stabilized," continued Howat, "we don’t know whether they will remain stable, grow, or continue to collapse in the near future. Because we know the behavior of these glaciers can change from year to year, we can’t assume to [predict] future behavior from short records of recent changes."

There is no doubt that the Earth is warming, but not, it appears, very rapidly. The claim that the warming is the result of man-made greenhouse gas emissions remains unproved and, to my mind, dubious. I think it’s not impossible, but also unlikely.

In that regard, Lorne Gunter, a veteran columnist for the Edmonton Journal, had an interesting column in Canada’s National Post. He noted that the ice caps on Mars are melting and that Jupiter is growing a second giant red spot, a likely result of planetary warming. Imke de Pater, a scientist at the University of California, Berkeley, says parts of Jupiter are as much as six degrees Celsius warmer than a few years ago. Triton, Neptune’s moon, is warming. So is Pluto, although it’s still mostly a frigid ice ball.

Gunter asks, "Hmmm, is there some giant, self-luminous ball of burning gas with a mass more than 300,000 times that of Earth and a core temperature of more than 20 million degrees Celsius, that for the past century or more has been unusually active and powerful? Is there something about which they all revolve that could be causing this multi-globe warming? Naw!"

In short, I know no more about global warming after my visit to southern Patagonia than I did before. I do, however, know a lot more about glaciers and glacial geology, Andean condors, Magellanic penguins, tango, and grass-fed beef. In my life, those are a lot more important than global warming.