While noting marginal improvements since last year, America’s power reliability watchdog recently warned that the nation’s growing thirst for electricity will still far exceed planned increases in generation capacity over the next 10 years, and that reserve margins could dip below optimal levels within two or three years in California, the Rocky Mountain states, New England, Texas, the Southwest, and the Midwest.

In its annual long-term reliability assessment, the North American Electric Reliability Corp. (NERC) said that although projected capacity margins in many areas had grown somewhat since its 2006 forecast, more new power plants and greater conservation efforts were still needed in many regions of the U.S. and Canada ( Figure 1). 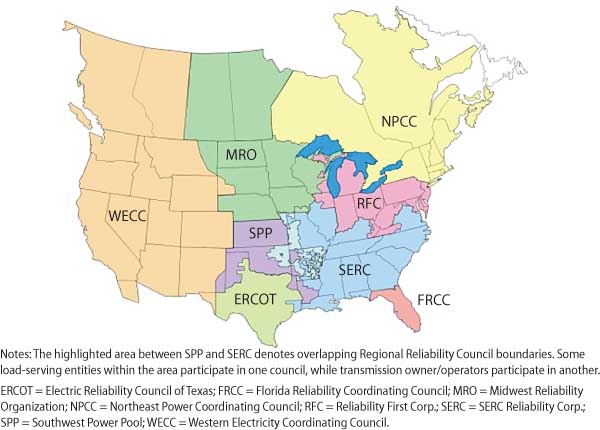 According to NERC’s latest forecast, U.S. summer peak demand will increase by more than 135,000 MW, or 17.7%, over the next 10 years. However, "committed" new generation resources — plants already built, under construction, or considered ready to help meet demand — are projected to increase by only 77,000 MW, or 8.4%. Including "uncommitted" resources — projects lacking firm power-purchase agreements and/or transmission capacity — generation is expected to grow by 123,000 MW, or 12.7%.

NERC President and CEO Rick Sergel said the looming gap threatened to aggravate an already tenuous reliability situation in many parts of the country. "We are at the stage where emergency situations are becoming more frequent. Though some improvements have been made, we are requiring our aging grid to bear more and more strain, and are operating the system at or near its limits more often than ever before. As operating margins decrease, we are limiting our ability to manage unplanned events like equipment failures and extreme weather."

NERC, certified by the Federal Energy Regulatory Commission (FERC) and Canadian authorities in July 2006 as the reliability monitor for the North American power grid, identified in the report several issues that could critically impact long-term reliability unless they are addressed promptly. Among them ( see box) are "declining capacity margins, lagging transmission construction, fuel supply and delivery issues (focusing on natural gas), and the aging industry workforce."

NERC admitted that efforts to improve reliability since 2006 "have yet to substantially mitigate the risk of these issues to future reliability." Areas of the most concern include western states and parts of Canada served by the Western Electricity Coordinating Council, California, the Rocky Mountains, New England, Texas, the Southwest, and the Midwest. NERC pointed to uncertain capacity margins in many areas as a red flag and noted that some regions were relying on untested market concepts — such as forward capacity markets — to fill the gap.

"Overall committed capacity margins improved by approximately 2% in the U.S. over the last year, but margins in some areas decreased," the NERC report stated. "Several areas established forward capacity markets, which will be relied upon to provide the necessary, new resources to maintain reliability."

The report charged the industry with relying too much on potential capacity resources that may not be able to help meet growing demand. "A major driver of the uncertain or inadequate capacity margins is the industry’s relatively recent shorter-term approach to resource planning and acquisition, relying heavily on unspecified, undeveloped, and/or uncommitted resources to meet projected demand," the NERC forecast read ( Figure 4). 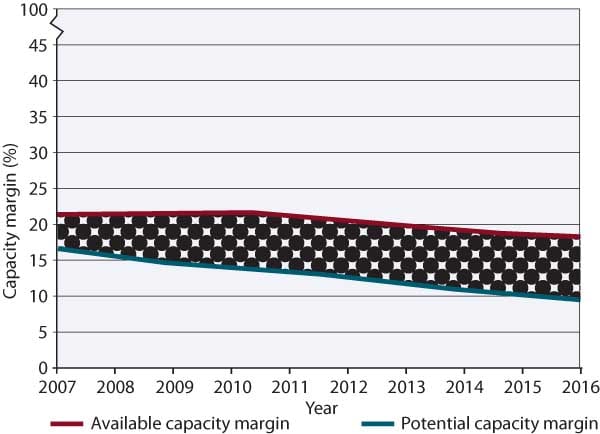 "This trend has been made possible by shorter plant construction times — especially in the case of natural gas plants that can be constructed in as little as 18 months," NERC said. "Shorter-term commitments are generally more attractive to investors and load-serving entities alike, as they offer more certainty on potential revenues, demand trends and the regulatory climate before investments are made."

According to the report, about 2,000 miles of new transmission (about a 1% increase) were added to the bulk power system over the past year. It also mentioned the new policy under which the U.S. Department of Energy can designate a congested area as a "national interest electric transmission corridor." Once an area has been so designated, FERC can approve within it any proposed transmission project for which state regulators have withheld approval for more than one year.

The NERC report added that integrating new, renewable-fuel generation (wind farms and solar arrays), as well as possible new nuclear units, into the bulk grid will require different types of transmission infrastructure to ensure reliability. Money continues to be in short supply for transmission. "Though investment is increasing in some areas, lagging investment in transmission resources has been an ongoing concern for a number of years," the NERC report stated. "More investment is required, as each peak season puts more and more strain on the transmission system, especially in constrained areas such as the Northeast, California, and southwestern U.S., as well as parts of Ontario, Canada."

About 12,000 MW of new nuclear capacity is proposed to be on-line by 2015 or 2016, NERC said. Because some units will be bigger than 1,600 MW, "significant investment in transmission is vital to support these large units."

NERC also said in the report that "continued high levels of dependence on natural gas for electricity generation in Florida, Texas, the Northeast, and Southern California have increased the bulk power system’s exposure to interruptions in fuel supply and delivery. Efforts to address this dependence must be continued and actively expanded to avoid risks to future resource adequacy."

The release of NERC’s rather gloomy report coincided with the issuance of another report by the ISO/RTO Council, which represents the nation’s independent system operators and regional transmission organizations. The report, "Progress of Organized Wholesale Electricity Markets in North America," suggested that the deregulated wholesale power markets that the council oversees were working well for the nation. It concluded that "emerging wholesale electricity markets are efficient and fair for all market participants; that bulk power systems are operating reliably; and that new, non-utility competitors have open access to the transmission grid."

The report says 2006 data show that wholesale electricity prices are falling even in the face of rising demand, and that ISO- and RTO-led planning processes are "stimulating investment in generation, encouraging use of demand resources, and reducing congestion costs." It adds that competition "has motivated improvements in generation operating efficiencies and investment in new, more-efficient generation facilities — this means that more demand is served by lower-cost, more fuel-efficient generators."

The ISO/RTO report draws different conclusions than has harsh criticism of wholesale power market deregulation by consumer groups, public utilities, and some industrial customers — all of whom contend that prices have skyrocketed in deregulated markets.