Thermal storage is often touted as the future of concentrating solar power (CSP), but it turns out there are other ways of delivering firm dispatchable CSP-generated power. A unique plant in Spain has gone the hybrid route, combining CSP with biomass generation fired with the region’s ample agricultural wastes.

Though there are now many nations with concentrating solar power (CSP) plants in operation, and nations with larger ones than Spain possesses, it’s difficult to discuss CSP without beginning in this sunny western European nation.

Spain inaugurated the first commercial power tower CSP plant in Europe in 2007, the 11-MW Planta Solar 10 project in Seville, as well as Europe’s first parabolic trough CSP plant, the 50-MW Andasol 1 facility in Aldeire. The nation leads the world in both number of commercial plants (51) and total installed capacity (2.3 GW).

Spain has been a leader in developing advanced CSP technology such as thermal storage, and Spanish firm Abengoa has been one of the most successful in deploying CSP plants around the world, including several large projects in the U.S. (such as the 280-MW Solana Generating Station, a 2014 POWER Top Plant).

One of those Spanish innovations can be found in a smallish plant in the far northeast corner of the country, near the town of Les Borges Blanques, in the midst of mile upon mile of olive groves, for which the Catalan region is famous.

CSP’s key advantage over solar photovolatic (PV) generation is that it is less senstitive to intermittencies of sunlight. A CSP system’s thermal inertia means it can keep generating when clouds pass over briefly, and though generation may dip, it will not fall as rapidly as with a PV system. In addition, while a pure CSP system is still dependent on sunlight and cannot generate at night, its thermal energy can be stored in various ways.

Adding thermal storage, however, can be expensive, and it adds complexities to the plant. But how else to address its intermittent generation? 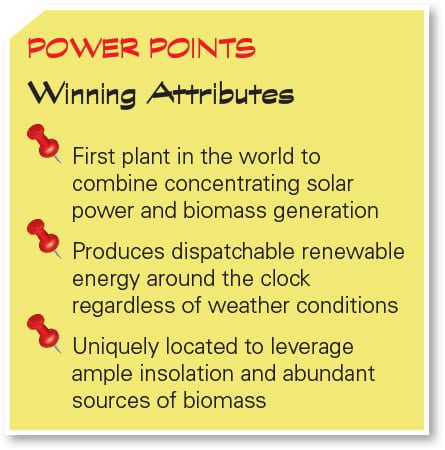 In 2010, Spanish firms Abantia and Comsa Emte had a different idea: combining CSP with a biomass-fired boiler. The goal was continuous, stable renewable energy with complementary systems that would balance out any intermittency in generation.

But it was one thing to suggest combining CSP and biomass, and another to make it happen in a way that was more efficient and effective than two plants operating separately.

The location, despite being well north of most of Spain’s solar generation—which is concentrated in the southern regions of the county—was chosen for several reasons. First, as it was located in the middle of a large farming region, the plant would have access to abundant wood products and agricultural waste for fuel. (For another example of using olive waste products for energy, see the article in the August 2012 issue about Combined Solar Technologies’ plant at the Musco Family Olive Co. in Tracy, Calif., POWER’s 2012 Marmaduke Award winner.)

Second, the location away from optimal solar insolation was intended to demonstrate that hybrid plants such as this could expand the possible regions (in Spain and elsewhere) where CSP could be effective. While the location might not be ideal for CSP alone, combining it with a well-situated biomass plant would enable renewable generation in areas that might be less competitive otherwise.

Focus then turned to the plant’s design.

A CSP plant has four main components: The solar field, where the reflectors—in this case, parabolic troughs—collect the solar radiation and transfer it to a heat transfer fluid (HTF); the power block, where the thermal energy in the fluid is used to create steam and drive a turbine; the electrical block, where power is generated and sent to the grid; and the balance-of-plant (BOP) systems. A biomass plant, by contrast, has some different elements: In addition to its thermal block, it must also have systems for intake and processing of its feedstock.

The designers of Termosolar Borges sought to integrate the two designs’ thermal and electrical blocks. The plant’s two hybrid boilers are able to use either the HTF or biomass to generate steam, depending on the time of day and the weather conditions. In addition, a smaller auxiliary boiler can fire natural gas to supplement control of steam production, as needed. A specially designed control system balances the three to maintain stable generation.

Under normal operation, the solar field and HTF are used to generate steam during the day. At night, and during overcast days, the boilers are fired with biomass. When burning biomass, combustion air is preheated in an economizer, and when biomass moisture content is higher than normal, the natural gas boiler can be used to maintain steam outlet temperatures. The combined system has a capacity of 36 MWt and 22.5 MWe. The biomass furnace was sized to maintain 50% power at night, since below that the steam turbine operates much less efficiently.

Thus, by integrating the biomass boiler with the CSP thermal loop, the two generation systems rely on much of the same infrastructure and are able to provide continuous, round-the-clock power.

Construction of Termosolar Borges began in March 2011 and was completed in November 2012. Following testing and commissioning, the plant entered commercial operation in December. Total investment was €153 million. About 40 permanent workers operate the plant.

The 183,120 m2 solar field, comprising 336 collectors, 2,688 parabolic troughs, and 56 thermal loops, was supplied by Siemens subsidiary Siemens Sunfield. The HTF, supplied by Dow Chemical, operates at an intake temperature of 293C and an outlet temperature of 393C.

The three boilers were supplied by Intec and feed a single MAN Diesel & Turbo MARC 6-R05 steam turbine operating at 37% efficiency (Figure 1). Abantia and Comsa Emte served as their own engineering, procurement, and construction suppliers, while other BOP systems were supplied by Weber-Hydraulik (hydraulic systems), Ideas en Metal (piping and structural elements), and Saidi (valves).

Termosolar Borges operates mainly on woody biomass sourced from forestry waste from various locations in Catalonia, as well as agricultural waste products. Total intake is 66,000 tons per year at an average 45% moisture content. The biomass is shredded and dried before being burned in the boiler.

Though Termosolar Borges has operated well since coming online, not all is sunny in the Spanish CSP sector.

Much of the reason the nation has so much CSP capacity was a 2007 law that provided generous tariffs for CSP-generated electricity. That sparked a construction boom well beyond what policymakers anticipated. The near-term target was 500 MW of capacity; more than 4 GW was announced and 2.3 GW approved for construction. As the plants came online, that meant significantly higher subsidies were being paid than had been planned for. By 2011, the sector was experiencing an unsustainable €30 billion deficit, forcing regulatory changes that substantially reduced potential investment returns and brought the Spanish CSP boom to a complete halt. More than 2 GW of announced capacity was cancelled, and no new CSP plants have been planned since 2010.

Sector observers have been looking for ways to restart CSP development under more sustainable policies, but ongoing overcapacity in the Spanish power market suggests that meaningful changes are unlikely in the near term. Still, the potential that Termosolar Borges has shown for hybrid CSP plants is worthy of recognition. ■