One often-overlooked consequence of increasing plant capacity is the premium it places on boiler cleanliness. When a coal plant — even a more-efficient one — operates at higher loads, it almost always burns more fuel. Burning more coal produces more ash inside the boiler, which in turn can cause more slagging in the furnace and higher fouling rates in the convection region.

If the plant’s boiler cleaning system is not adequately prepared for higher loads, the best-case outcome is a loss of heat transfer due to increased tube deposits — in effect, negating the efficiency gain. Worst-case scenarios include having to reduce plant load to shed deposits, and forced outages to unplug boiler tubes.

Upgrading the boiler’s cleaning system following a unit capacity uprate can avoid these negative and costly outcomes. Several upgrade strategies and tactics are available, and one or more can be chosen to meet the plant’s specific needs in the most cost-effective manner. The options include:

The Downsides of an Uprate

The following story about the unintended consequences of uprating an Australian coal plant explains why a more-efficient boiler must be cleaner, and what needs to be done to make it — and keep it — cleaner. By taking a number of conventional steps (including upgrading pulverizers), the owners of the plant, which fires bituminous coal and was less than 10 years old, had improved its efficiency such that the plant’s maximum continuous rating (MCR) had risen from 330 MW to 340 MW — a 3% increase. The plant often operated near, at, or even above MCR — especially during peak hours.

Though these new higher loads were achievable much of the time, plant personnel began to observe increased fouling and higher furnace exit gas temperatures (FEGTs). Engineers realized the two phenomena were related; the combined effect of the higher-throughput pulverizers and increased heat input to the furnace had elevated both the fireball and FEGT. Fouling patterns also had changed: Ash deposits had shifted from the tertiary superheater to the reheater due to the increased FEGT. In some instances, plugging occurred in the economizer, forcing the unit off-line. All in all, it became increasingly harder to sustain generation at the higher loads because it was no longer as easy to keep the boiler clean.

After realizing that the existing boiler cleaning system was no longer adequate, the plant’s owner hired Diamond Power International Inc. (DPII) to come up with a solution to the fouling problems. Soon after arriving on-site, DPII field engineers concluded that treating the cause, rather than the symptoms, of the plant’s problems cost-effectively would require a total systems approach. New hardware, software, and instrumentation would have to be incorporated into a new boiler cleaning system capable of achieving three goals:

Focusing on the Furnace

To enable continuously higher loads, DPII engineers targeted the furnace, because it was there that high FEGTs were causing many of the slagging problems. Their strategy was to reduce FEGTs and to increase heat transfer across the furnace tubes, and their tactics were to provide:

Continuous monitoring of FEGT would not only help efforts to improve heat transfer, but it also would make it possible to remove more-tenacious deposits from the convection section and to clean highly fouled areas. Adding new IR furnace sootblowers and making sootblowing algorithms smarter would address the inadequacies of the original boiler cleaning system in the furnace, which had been overwhelmed by the additional ash produced by increased generation on a continuous basis.

DPII engineers and technicians replaced the original sootblowers with PrecisionClean retractable sootblowers in the convection region. Because PrecisionClean sootblowers provide a nearly constant cleaning jet speed across the heat transfer surface, which older sootblowers can not do, PrecisionClean units have a larger cleaning radius. Instead of turning at a constant angular velocity, the lance is slowed by a patented algorithm as its jets near tubes to be cleaned (Figures 2 and 3). After dwelling on the tubes and cleaning them thoroughly, the lance then is moved quickly by the same algorithm to the next set of tubes, initiating a new sequence and maximizing the system’s efficiency. 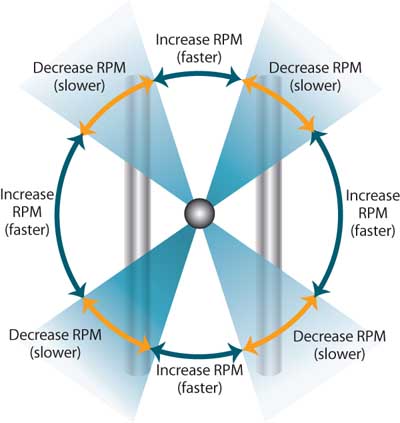 2. As the jets of a PrecisionClean sootblower lance reach their targets–boiler tubes–smart software slows them down to maximize cleaning effectiveness. Courtesy: Diamond Power International Inc. 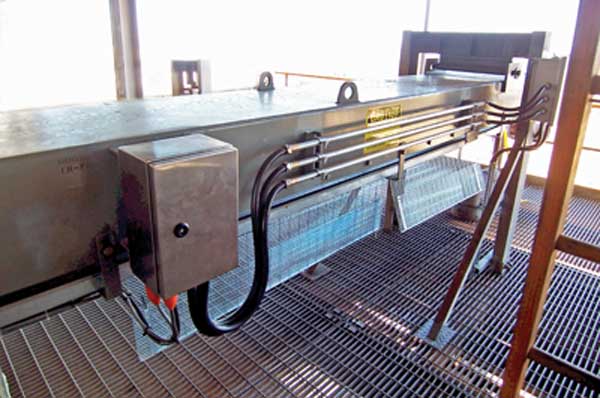 Intelligent sootblower (ISB) controls incorporating decades of field experience were installed along with the PrecisionClean sootblowers. The ISB controls determine when and where to clean in the convection region, based on the output of a thermodynamic module. The module collects readings from multiple sensors (including the FEGT monitor) installed at various points between the furnace exit and the economizer outlet and converts them to cleanliness factors for different regions. By glancing at these readings, operators can quickly determine how clean different areas of the boiler are.

Waste Not, Erode Not

As mentioned earlier, the third goal of the project was to reduce sootblower-induced tube erosion. Though installing the PrecisionClean sootblowers and ISB controls represented a big step in that direction, the plant’s owner and DPII determined that using the company’s variable header steam flow control technology would provide maximum mitigation of erosive effects.

Normally, plant operators manually set the steam flow level of each and every traditional sootblower serving a boiler. With DPII’s variable-flow system, that is likewise possible — as is the ability to apply different levels of steam during different segments of a blower’s travel. Because most ash removal occurs during lance insertion (and very little during retraction), increasing steam flow during the inward stroke of the lance (Figure 4) and decreasing it during the outward stroke reduces tube erosion while maintaining cleaning effectiveness. It also avoids wasting steam that costs energy to produce.

Variable-flow systems are commonplace on heat-recovery boilers in the pulp and paper industry, but they are still rare on utility-scale boilers. Seizing the opportunity to promote the technology, DPII’s engineers took it one step further during the Australian project. They made its control system a closed loop, enabling it to automatically adapt and adjust the steam flow to measures of cleaning performance. DPII has since patented this novel implementation (Figure 5). 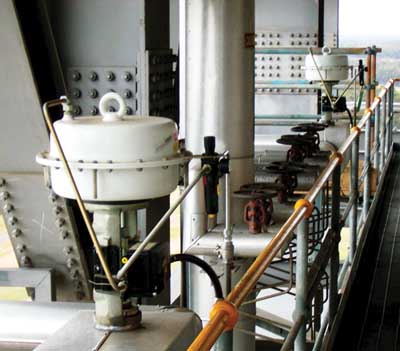 5. Two header valves control sootblower steam flow as part of a closed loop, in what is considered the first application of adaptive variable steam flow technology at a utility p

Uplifting Results Down Under

Since installation of the PrecisionClean sootblowers, ISB controls, and variable-flow system in November 2006, the Australian generating unit has not gone off-line due to issues related to boiler cleaning. The plant has been able to continuously run at MCR levels of 340 MW and above with no instances of increased fouling or higher FEGTs, as before. Because the unit is running cleaner, its heat rate also has fallen.

While the unit is reporting an 18% reduction in sootblower operations per day in the furnace, and a 21% reduction in the convection pass, cleaning effectiveness has never been better, operators report. It’s worth noting that, in many cases, fewer cleaning operations translate into reduced tube erosion.

As for the novel approach to adaptive variable-flow control, the results speak for themselves. The following improvements in boiler performance are directly attributable to the implementation of intelligent controls and the adaptive system: an increase in convection effectiveness of 0.5% and significant decreases in air heater gas outlet temperatures and superheat mass spray flow.

Specifically, adaptive management of sequencing enabled more efficient use of sootblowers, as reflected by increases in the average improvement in cleanliness per cycle. The sequences for the tertiary superheater, reheater, and economizer each saw an increase in that metric of more than 20% (Figure 6). 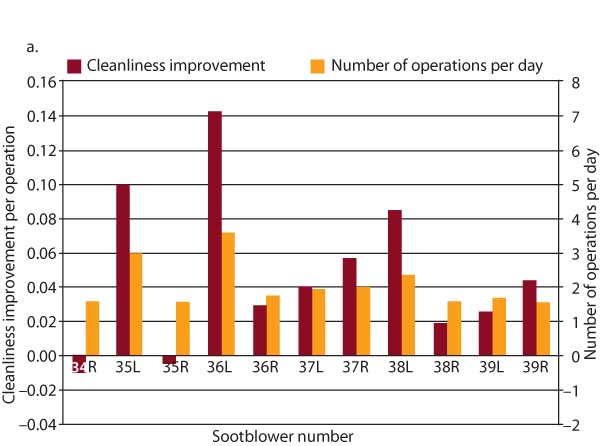 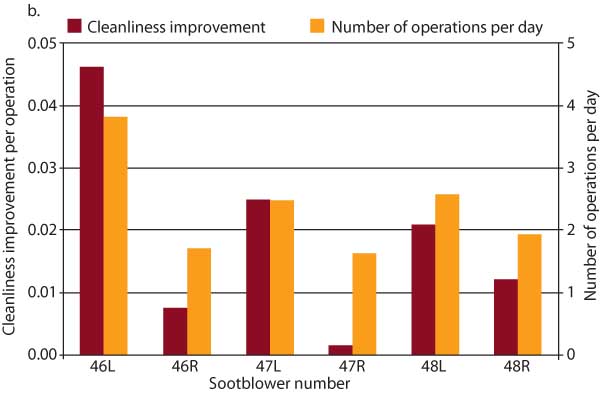