Geothermal energy in Europe may have been used for centuries — it was popularized by the Romans and adopted by the Turks — but geothermal-generated electricity was first produced at Larderello, Italy, in 1904. Since then, its growth on the continent has shot up to 820 MW. But, according to the European Renewable Energy Council, the resource’s full potential has barely been harnessed.

Iceland, for example, a country characterized by volcanoes and hot springs, uses geothermal energy to heat 90% of households but only taps 20% of its geothermal potential, and geothermal power only constitutes a quarter of its energy portfolio (Figure 7). Likewise, reservoirs in Italy, Turkey, France, Hungary, Poland, and Germany have massive but latent potential, the council says. 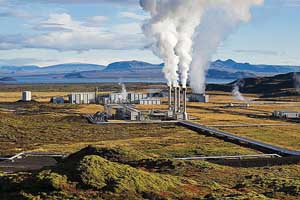 7.    Of ice and steam. Iceland, a country rich in volcanoes and hot springs, uses only 20% of its geothermal energy potential for heat and power, the National Energy Authority acknowledges. A quarter of the country’s power portfolio comes from geothermal energy, produced by five primary power plants. The 120-MW Nesjavellir power plant (shown here) in southwest Iceland is the largest of these. Plans to utilize the area for geothermal power were initialized in 1947, with research continuing until 1987. This plant started producing power in the early 1990s. Courtesy: Gretar Ívarsson

That could soon change. Scientists from seven European Union nations say they have developed an innovative geophysical strategy to safely explore and directly tap these geothermal reservoirs. The approach, unveiled at the final conference of the Integrated Geophysical Exploration Technologies for Deep Fractured Geothermal Systems (I-GET) this March in Potsdam, Germany, integrates several fields — from rock physics to seismic and magnetotelluric data processing and modeling. It also exploits the full potential of seismic and electromagnetic exploration methods to detect permeable zones and fluid-bearing activities.

"The new methods deliver important decision-support for the selection of sites for future geothermal projects," said Dr. Ernst Huenges, head of geothermal research at the host institute, GFZ-German Research Centre for Geosciences. "With this we can considerably reduce the risk of expensive misdrills."

The scientists tested the approach at four European locations with diverse geological and thermodynamic conditions: high-temperature reservoirs in Italy’s Travale region, which is characterized by metamorphic rocks; the Hengill in Iceland, with dense volcanic rock; and two deposits with medium-temperature reservoirs in deep sedimentary rocks at Gross-Schönebeck in Germany and Skierniewice in Poland.

A finding presented at the conference showed that the team had succeeded in localizing geothermal reservoirs in Italy’s Travale region with as much potential as "1,000 wind power plants" (of unspecified capacity), GFZ said in a March statement. It added that the research could be useful to countries such as Indonesia, New Zealand, Australia, Japan, and the U.S. that are looking to exploit rich geothermal resources, and that the GFZ would therefore set up an international research center to carry out application-oriented large-scale projects on a national and international level.