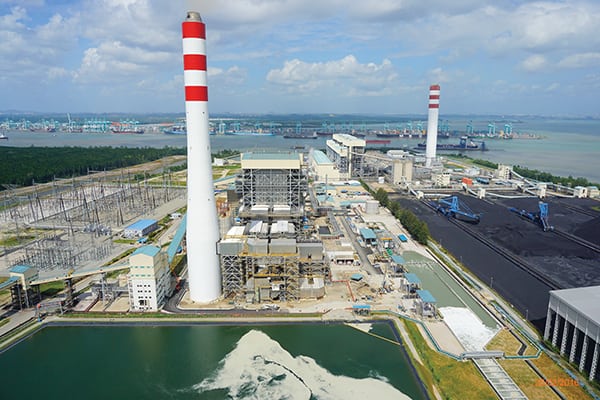 Building a power plant on a site previously used for an aquaculture farm comes with more than a few challenges. For the Tanjung Bin Energy Power Plant, that meant some redesign and rework was required. Even so, the GE-led construction consortium made adjustments and delivered the state-of-the-art ultrasupercritical project on time and on budget.

Malaysia has undergone a miraculous transformation over the past 50 years. According to The World Bank, more than 50% of households in the Southeast Asian country lived below the national poverty line in the 1960s, but that percentage has fallen to less than 1% today. Malaysia has diversified its economy and is now a leading exporter of electrical appliances, electronic parts and components, palm oil, and natural gas.

As the nation’s people have prospered and various industries have grown, so has Malaysia’s electricity demand. The country’s energy commission reported that electricity consumption grew 8.39% annually from 1990 through 2013. Its 30 million people consumed a little more than 123 TWh of electricity in 2013.

Natural gas has long been the leading power generation fuel source in Malaysia, used for more than half of the country’s electricity mix. However, coal-fired generation, which was nonexistent before 1989, has grown steadily since 2000, displacing virtually all of the oil-fired generation and picking up most of the demand growth. Coal generation accounted for 48% of Malaysia’s mix in 2015, even though almost 98% of the coal fuel supply is imported. 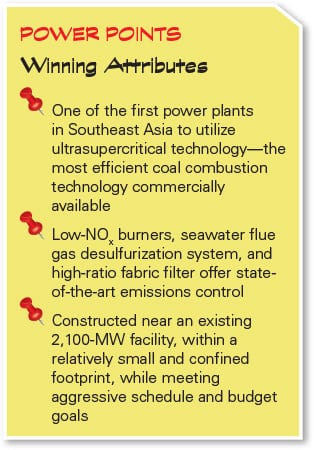 One impressive coal-fired plant that has been added recently in the state of Johor is the Tanjung Bin Energy Power Plant (T4). The 1,000-MW unit—owned and operated by Malakoff Corp. Bhd.—features ultrasupercritical technology, which provides the most efficient coal combustion technology currently on the market.

Malakoff, a member of the MMC Group, was given the notice to proceed with T4’s construction in March 2012, following a competitive bidding process overseen by the Energy Commission of Malaysia. Alstom (now GE Steam Power Systems) and its consortium partners Mudajaya and Shin Eversendai (Table 1) signed an engineering, procurement, and construction contract worth more than €1 billion to build the plant on a turnkey basis.

The heart of the unit is a pulverized coal two-pass, tangential-fired ultrasupercritical boiler, utilizing GE’s latest technology. The advanced boiler design produces steam pressure up to 280 bar (4,061 psi) and steam temperature up to 600C (1,112F) while accommodating up to 15 different types of coal.

“This technology has achieved efficiencies up to 47 percent—above the global average rate of existing power plants of around 30 percent—lowering fuel consumption and emissions,” GE’s Steam Power Systems CEO Andreas Lusch said in a press release issued when T4 entered commercial operation. “Each additional percentage point in efficiency reduces carbon dioxide emissions by 2 to 3 percent,” he added.

Coal—sourced mainly from Indonesia—is delivered to the site on sea vessels carrying about 75,000 tons each. The ships are unloaded to the T4 coal yard, which has a 520,000-ton capacity, in three days or less. At nominal load, T4 consumes about 450 tons of coal per hour, providing a steam flow to the turbine inlet of about 896 kg/sec (7,111,232 lb/hr).

Environmental control systems—also supplied by GE—include low-NOx burners, a highly efficient seawater flue gas desulfurization (SWFGD) facility, and a pulse jet fabric filter. With these features, greater than 90% SO2 removal is achieved, keeping SO2 emissions less than 500 mg/Nm3, and particulate emissions are maintained below 50 mg/Nm3.

With the plant’s ability to burn a variety of coals and its use of a SWFGD system, T4’s steel chimney flue was poised to operate in a very corrosive environment. Therefore, Hadek Protective Systems supplied the Pennguard block lining system to protect the structure against the aggressive flue gases.

Installation of the Pennguard system first required a crew to grit blast sections of the chimney to a “near-white” condition. Once clean, a special block primer was applied. Then a special acid-resistant adhesive was used to attach individual closed cell borocilicate glass blocks to the inside surface of the chimney sections (Figure 1).

When the lining installation was complete and the adhesive had cured, the sections were lifted into place and bolted together. Pennguard linings are often installed in new chimneys, like T4’s, but the system can also be used to modify existing chimneys for low-temperature FGD operation. More than 225 chimney flues and ducts have been lined worldwide with very good success.

Trouble on the Ground

The T4 construction site had some unique characteristics that caused difficulty for the project. Before the land was acquired and Units 1–3 were built, the site had been used as an aquaculture farm. In order to make the ground suitable for construction, 6 million cubic meters of fill were added to raise the grade 4 meters above mean sea level. Additionally, 22 million meters of prefabricated vertical drains were installed to remove water from the site.

After construction was under way on T4, some unanticipated problems arose. After the first year’s worth of civil work had been completed, the project team found that soil movement was affecting plant foundations. This was a serious problem.

In order to remedy the situation, a complete demolition and reconstruction of one targeted area was required. The new understanding of subsoil conditions also affected plans for the remaining civil work. At the height of the trouble, the project was estimated to be about 10 months behind schedule due to the unexpected obstacles.

But a delay like that could simply not be accepted. A task force was developed and brainstorming sessions were held with project team members. GE managed to redesign the foundations, implemented new technologies, and completely re-sequenced construction activities. Consortium partners committed to delivering the project on schedule, and they put in extra hours to make up for lost time.

Often, when projects fall behind schedule, corners start to be cut, but leaders were unwilling to let that happen at T4. They did not want to compromise on quality or safety standards. To maintain focus and ensure a very high level of engagement, all supervisors conducted daily “toolbox talks” and briefings in the field, so interfaces could be managed smoothly. Additionally, a “zero-deviation” policy was implemented and strictly applied at the site.

The effort was effective. At the height of construction, there were more than 5,200 people working at the project site, including a labor force drawn from both the local area and neighboring countries. After tallying 32 million man-hours, the project recorded a lost-time injury ratio of only 0.31.

And the team found a way to get the project back on schedule. Thanks in part to the re-sequencing of the turbine hall erection and the simultaneous execution of civil, mechanical, and electrical work, the T4 construction team synchronized the generator for the first time on October 15, 2015—just 42 months after the notice to proceed with construction had been given. Roughly five months later, on March 21, 2016, the plant entered commercial operation on schedule and within budget.

The addition of Tanjung Bin Energy Power Plant gives Malaysia one of the most technically advanced coal-fired units in the world. ■