The first aircraft designed to fly day and night propelled solely by solar energy was unveiled at Dübendorf airfield, Switzerland, in late June. The Solar Impulse has the wingspan of a Boeing 747-400 and the weight of an average family car (1,600 kg) (Figure 4). More than 12,000 solar cells mounted onto the wings will power four electric motors with a maximum 10 horsepower each. During the day, the solar cells are designed to also charge lithium-polymer batteries (400 kg), which will allow the airplane to fly through the night. 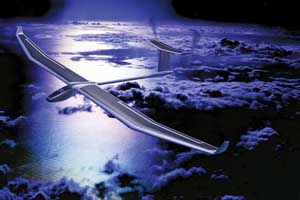 4. Soaring on solar. An aircraft prototype unveiled this June runs solely on solar energy via 12,000 solar cells mounted onto the wings. The plane, which features a wingspan of a Jumbo Jet and the weight of an average family car, has been designed to fly day and night.At 40 horsepower, it moves slowly however, accelerating to only 44 mph at altitude. Courtesy: Solar Impulse

Adventurer Bertrand Piccard, who unveiled the Solar Impulse along with Solar Impulse CEO André Borschberg, retraced the history of the project since it was launched in 2003. They said it took six years of calculations, simulations, and tests for the 70-person team to complete the aircraft prototype — HB-SIA. The prototype’s mission is to demonstrate the feasibility of a complete day-night-day cycle, running on nothing but solar energy. This year and next year the plane will make its first test flights — including a complete night flight over Switzerland. Based on the results of those flights, the prototype will be improved.

The Solar Impulse’s inventors hope that starting in 2012, a second experimental plane, HB-SIB, will circumnavigate the world in five stages — albeit slowly. With only 40 horsepower, the aircraft takes off at 22 mph and then accelerates at altitude to an estimated speed of only 44 mph — as fast as an average scooter.