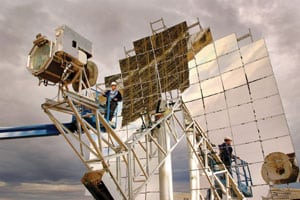 Here’s how it works. The solar dish focuses the sun’s rays onto a receiver, which transmits heat to a piston engine. The engine is a sealed system filled with hydrogen. As the hydrogen heats up, its pressure rises. The change in pressure drives the pistons inside the engine, producing mechanical power that is then used to turn a generator.

Each unit operates automatically. Without operator intervention, it starts up each morning at dawn and operates throughout the day, tracking the sun and responding to clouds and wind as needed. The unit then shuts itself down at sunset. The system can be monitored and controlled over the Internet.

"This will be the largest array of solar dish–Stirling systems in the world," said Chuck Andraka, the Sandia project leader. "Ultimately, SES hopes 20,000 systems can be sited at one or more solar dish farms to supply electricity to southwest U.S. utilities."

Each dish unit consists of 82 small mirrors arranged in the shape of a dish. The steel frame is made by Phoenix-based Schuff Steel Co.; the mirrors, from Paneltec Corp. (Lafayette, Colo.), are laminated onto a honeycomb aluminum structure invented in the late 1990s (patent pending) by Sandia researchers. The engine will be assembled at Sandia’s test facility using parts contracted for by SES.

Now that the units have been installed, Sandia and SES researchers are studying how to best integrate them as a system in the field to improve reliability and performance. "It’s one thing to have one system to operate, but it’s quite another to have six that must work in unison," Andraka said.

"These generators could also be used to operate as stand-alone units in remote areas off the grid (such as the Navajo reservation), to supply power to one or several homes," said Bob Liden, executive VP and general manager of SES. Stand-alone units have already proven effective at pumping water in rural areas. Liden noted that the Stirling dish-engine system works at higher efficiencies than any currently available solar technology, with a net solar-to-electric (AC) conversion efficiency of 30%. Each unit can produce up to 25 kW.