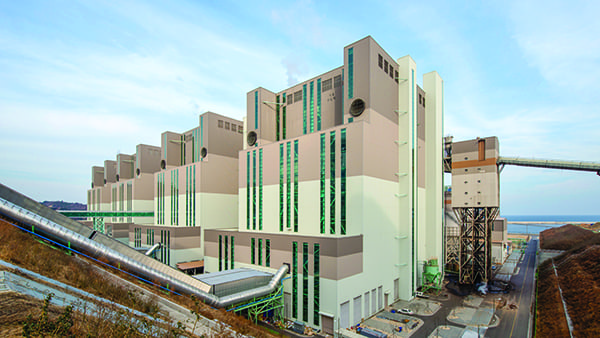 The Samcheok Green Power Plant requires less maintenance and is more cost-effective than conventional coal plants, and more environmentally friendly with its use of once-through ultrasupercritical boilers.

Coal-fired power plant operators have battled many challenges in recent years. The financial struggles of coal plants have been well-documented; expenditures for technology to lower emissions in the face of more-stringent environmental regulations are just one of the issues plant owners have been forced to consider when deciding what equipment to upgrade.

Some operators have chosen to forgo coal, instead retrofitting plants to run on natural gas. Others have simply decided to retire their coal-fueled facilities. But what if your plant was needed to supply power in an area of growing demand? And what if coal represented the most cost-effective generation option?

Such was the case with state-run Korea Southern Power Co. (KOSPO) in South Korea, a country dependent on imported fuels. The region has some of the highest oil and gas prices in the world. Nuclear power is a non-starter; construction of a nuclear plant takes too long to satisfy the growing demand for power, and the Fukushima disaster in neighboring Japan is still fresh in the minds of the population.

KOSPO looked at boiler technologies, deciding that circulating fluidized bed (CFB) was the best option. CFB could use lower-quality, less-costly coal, and advancements in the technology would offer fuel flexibility and reduced emissions, making a plant both more environmentally friendly and economically viable.

The result is KOSPO’s 2,200-MW Green Power Plant. Unit 1 came online in Samcheok, South Korea, in December 2016, with Unit 2 entering commercial operation in June 2017. CFB technology is not new—it has been in use for more than 40 years—but today’s applications of the technology are advanced far beyond what came before. The Samcheok plant uses CFB technology from Sumitomo SHI FW, with fuel flexibility and design features that make it more reliable than conventional pulverized coal (PC) technology. It requires less maintenance, and is more cost-effective, when compared to conventional PC units. The Samcheok project is a model for CFB and its success makes it worthy of a POWER Top Plant award for coal-fired generation.

KOSPO selected Sumitomo’s advanced CFBs to power the Samcheok plant after more than a year of study and evaluation. The contract was awarded to Amec Foster Wheeler (whose CFB technology was acquired by Sumitomo last year) in 2011 for design and supply of four 550-MW ultrasupercritical boilers. It’s still the world’s largest CFB plant. Samcheok was built as two units, each with two boilers that feed into separate 1,100-MW steam turbines.

“Many power companies are not familiar with CFB technology. They are familiar with PC, and it’s hard to get them to embrace something they don’t have experience with,” Bob Giglio, senior vice president-Strategic Business Development for Sumitomo SHI FW, told POWER. “A few key senior executives at KOSPO who were familiar with CFB saw the potential. It requires a progressive management committee to see the benefits.” Giglio said the performance of the Samcheok plant has quickly enabled KOSPO to see how the value of the technology outweighs any concerns about trying something new.

“Most of the new-build coal utility power market worldwide still selects conventional PC technology, I estimate 85% to 90%,” said Giglio. “Korea is even more of a PC world. Before Samcheok, they had never done large-scale CFB.”

Giglio noted KOSPO is a government-owned utility. “It was a big step for KOSPO to select CFB technology,” he said. “They broke the mold by saying it’s a better move for the country. They don’t have indigenous energy sources, and they are really impacted by changing fuel prices globally. As their energy prices go up, it’s harder for them to keep their export product prices down to be competitive in the global economy. The key for them was the fuel-flexible energy, and the ability to utilize carbon-neutral fuels. The CFB was the one technology that gave them that option.”

Former KOSPO CEO Lee Sang-ho, who led the company during development of the plant, told The Korea Herald at the time the driving factors behind CFB selection were that “it is more environmentally friendly… than conventional boilers,” and “more importantly, CFB steam generators can maximize efficiency of coal-powered power plants as they can be run based on cheap, low-grade coal.”

Giglio said the “reference” for the Samcheok plant was provided by Tauron’s Łagisza power plant in Bedzin, Poland, which began commercial operation in 2009. That plant, though much smaller than Samcheok at 460 MW, operates on a range of Polish bituminous coals. It has demonstrated a net thermal efficiency (LHV) of better than 43% with a once-through supercritical (OTSC) CFB supplied by Sumitomo SHI FW.

Giglio said Samcheok has even tighter emissions limits than Łagisza and meets its 50 ppm SOx emission target without FGD, which saved KOSPO more than $200 million in construction costs. NOx and SOx emissions at Samcheok are each guaranteed at 50 ppm. Dust emissions are controlled by electrostatic precipitators so that particulates do not exceed 20 mg/Nm3. Carbon dioxide emissions are estimated at about 800 g/kWh, about 25% below the typical operating conventional coal plant in Korea. 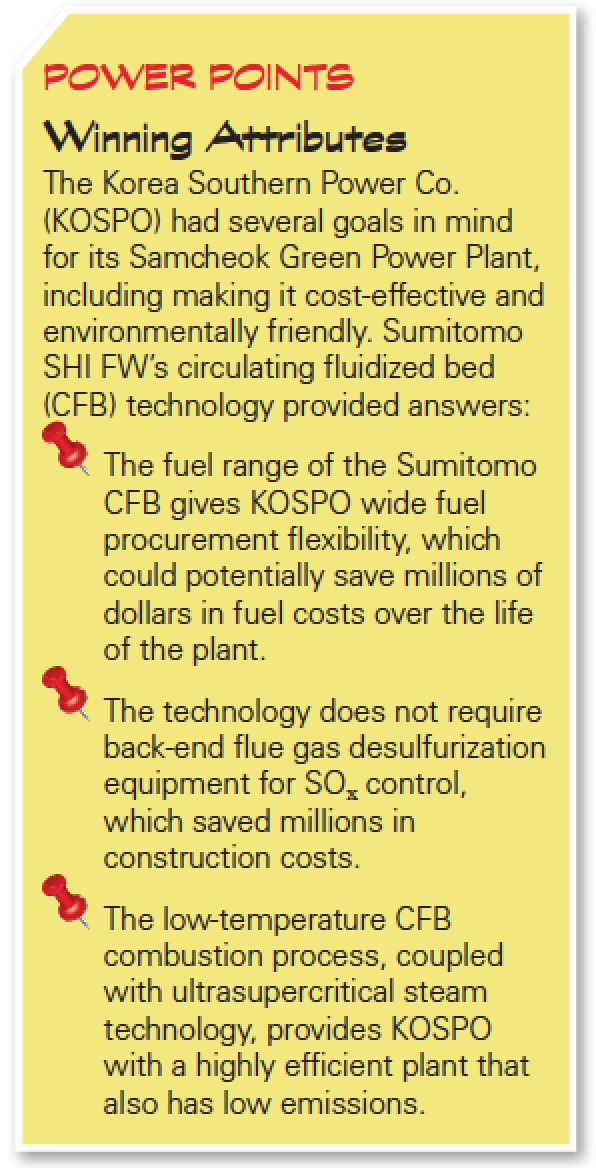 “Samcheok is an ultrasupercritical steam design,” Giglio said. “It incorporates all of our latest advances for large CFB units.”

The vertical tube design allows the use of many of the same relatively low-cost and low-maintenance materials used in subcritical boilers, except in the final superheater section. With PC boilers, superheating takes place at the top of the boiler. In the Sumitomo CFB boilers, final superheating is done in a high-efficiency fluidized bed heat exchanger, called an INTREX, which protects the high-temperature superheating coils from the corrosive flue gases in the furnace. This allows for the same ultrasupercritical temperatures to be reached using a lower-grade coil material than would be needed in a PC boiler. It also means a lower-quality fuel can be used without sacrificing steam temperature or unit reliability.

Samcheok to date has sourced most of its coal from Indonesia. “The plant is designed to fire a wide range of coals with heating values ranging from 3,400 to 6,000 kcal/kg,” Giglio said. “The plant has recently been sourcing coals from the U.S. Powder River Basin and other countries as well.”

The plant also co-fires biomass. “It is designed to fire up to 5% biomass by heat input,” Giglio said. “That’s what KOSPO wanted, to be able to source domestic biomass. And they might increase that number.” South Korea has large forested areas, which helps the biomass supply. The plant has options for sourcing recycled wood waste from the nation’s lumber industry, and also can import wood pellets from foreign markets.

The plant’s coal supply is stored in enclosed bunkers and conveyed with closed conveyors to the boilers. That means there are no above-ground coal piles, or problems with coal dust in the plant’s vicinity.

The plant also strives for energy efficiency and sustainability across the entire complex. The coal units’ stacks are integrated with the plant’s office buildings and control room (Figure 1). Excess heat from the stacks is used to heat the office buildings and other buildings on the site. An intelligent lighting control system uses both natural and LED lighting.

KOSPO also focuses on water conservation and recycling, securing water for the plant through bank filtration, rainfall purification, and seawater desalination. It recycles all outflows with an integrated water and wastewater treatment system. Furthermore, KOSPO has plans to install solar panels on building roofs, including the coal bunkers.

Giglio said the use of CFB will grow as more utilities become aware of its advantages of fuel flexibility, reduced maintenance, ease of operation, and emissions reduction. “We have since advanced the design further with [even more] fuel flexibility,” he said. “Improving the technology is really about opening up the fuel window, continually reducing the emissions, and making the plant more efficient.” In short, meeting the needs of a power generation market always looking for an environmental and economic edge. ■