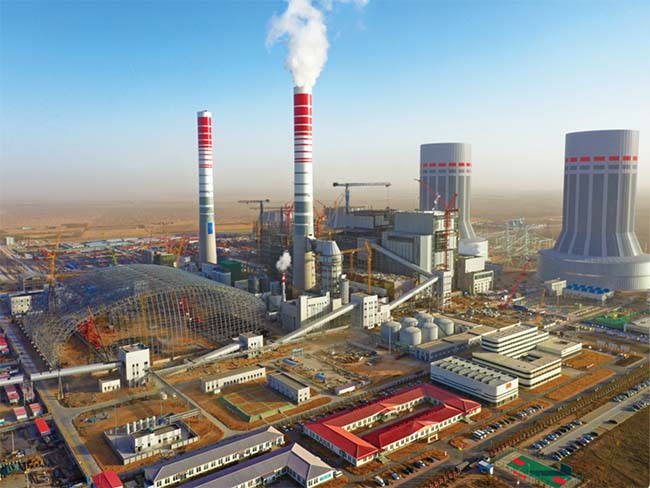 Chinese officials have acknowledged the need to expand the country’s renewable energy, saying China wants to achieve “carbon neutrality” by 2060. At the same time, the Beijing government knows that coal-fired power generation remains important for the country’s economy.

China began construction of at least 33 GW of coal-fired generation last year, with research groups saying that was more than three times the amount of the rest of the world combined. Those groups said another 7.3 GW was approved for construction in the first six weeks of 2022.

A recent report from China’s State Grid Corp. said concerns about the country’s energy supply mean China could build as much as 150 GW of new coal-fired power capacity from 2022 until 2025. That build-out comes after China brought more than 38 GW of new coal-fired power online in 2020. Officials have said those gigawatts are needed to satisfy record demand for electricity; a heatwave in June, with temperatures well above 100F in Shandong province, resulted in record levels of power load not only in Shandong but also in neighboring Henan province, according to state-run media.

Chinese government officials have told coal miners to ramp up their production as much as possible. Cabinet officials at a meeting in April approved plans to increase production capacity at domestic mines, saying the move is important for “energy security.” Output from coal mines has hit record levels, with inventories for the country’s utilities up 50 million tonnes year-over-year to 159 million tonnes in May, according to government data. Coal prices have been capped to make prices more palatable for operators of coal-fired facilities.

The continuing construction of coal-fired power plants does make China a proving ground for technologies designed to make coal plants more efficient, with reduced emissions of greenhouse gases. An example is the 1,000-MW Unit 1 of the Shanghaimiao coal-fired power plant (Figure 1), known as Guodian Power Shanghai Temple Co., or simply the Temple Project, which came online in December 2021, after a testing period of 168 hours. The plant, located in Ordos in the coal-rich northwestern region of Inner Mongolia, eventually will have four generating units, and is the “largest thermal power project under construction in China,” according to Guodian Power.

Officials with Guodian Power tout that the plant is equipped with desulfurization, denitrification, and dust removal systems to control emissions. They have said the plant’s technology puts the facility among the world’s most-efficient coal-fired plants, with what they called the “lowest rates of coal and water consumption.” (Editor’s note: Questions about the operation of the Shanghaimiao plant should be directed to GD Power Development Co.)

The plant’s advanced once-through ultrasupercritical boilers, from Babcock & Wilcox Beijing, are engineered for use with pulverized coal. The company, based in the Shijingshan district of Beijing, has said the equipment is usually applied to systems with a generation capacity of 400 MW or more, usually operate at throttle pressures of 3,500 psi (24.1 MPa) or more, and produce steam temperatures in the range of 1,100F (595C). Other equipment includes an air-cooled generator, and each of the eventual four units at the site will have a 240-meter-high flue stack.

POWER has chosen Unit 1 at Shanghaimiao as a coal Top Plant, based on the project’s advanced design and importance to China’s need to increase the country’s power generation capacity.

The Shanghaimiao plant is part of China’s strategy to deliver electricity via the 800-kV, 10-GW Shanghaimiao-Shandong ultra-high-voltage direct-current (UHVDC) transmission line, which has been operational since January 2019, to Shandong province on the country’s eastern coast. The line covers 1,231 kilometers (765 miles). ABB provided advanced converter transformers for the line, delivering 509-MVA converter transformers, plus 800-kV/6,250-amp DC breakers and wall bushings.

Shandong is China’s second-most-populous province, with a 2020 population of about 101.6 million. The capital, Jinan, has a population of about 9.2 million. Shandong is one of China’s richest provinces and is home to several large businesses. The province is the biggest industrial producer and among the top manufacturing provinces in China, so a reliable supply of electricity is important for the region’s economic development. Its coastal location also means it’s an important area to facilitate exports of Chinese goods.

Construction of the Shanghaimiao plant (Figure 2) began in June 2019, after the Environmental Protection Bureau of the Inner Mongolia Autonomous Region approved the project’s environmental assessment report in July 2016. The power plant is being built in two phases, each with two 1,000-MW units. Unit 2 is expected to be commissioned this year; the two units in phase two are expected to come online by 2025. The estimated investment for phase one is just more than $1 billion.

“During the construction of the project, the company closely controlled the six dimensions of ‘safety, high efficiency, environmental protection, low carbon, flexibility and intelligence,’ and achieved the highest thermal efficiency and environmental protection level among coal-fired units of the same type and capacity in the world, and coal consumption for power supply,” said Guodian Power. The group said the Temple project has “the lowest water consumption index for power generation,” and said it has achieved “many domestic firsts” for a thermal power plant, including “the fewest breakpoints for one-key start-stop,” along with “the largest number of recuperation stages [nine grades] among the 10,000 indirect air-cooled units.” Guodian said Shanghaimiao is a “thermal power plant with the lowest back pressure (9 kPa) among the air-cooled units, and the world’s first million-grade steel structure indirect air-cooling tower.” 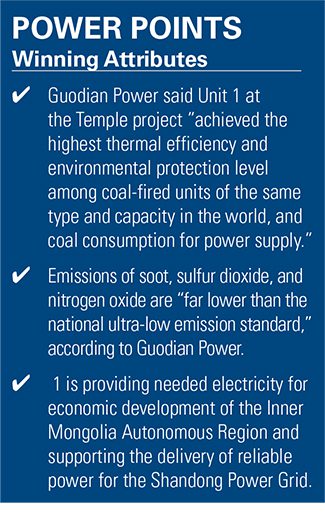 China Shenhua Energy, a state-owned mining company, is supplying the coal for the plant. Guodian officials said the first two units are expected to burn up to 5.1 million tonnes of coal annually. A 7.3-kilometer-long railway line has been built specifically to transport coal to the plant. Officials said the plant could, if needed, receive as much as 11.8 million tonnes of coal each year.