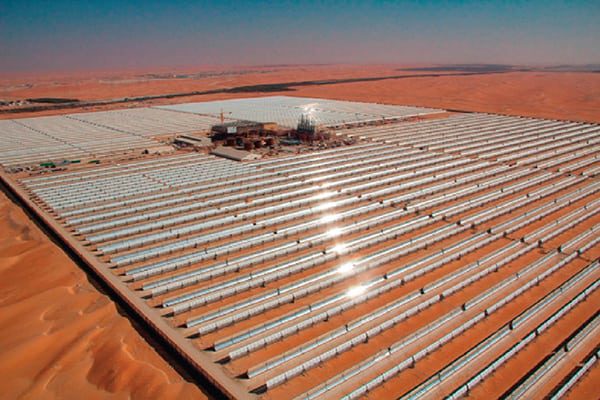 The Arabian Peninsula might seem like the ideal location for a concentrating solar power plant, but developers of the 100-MW Shams 1 CSP project in the UAE—the world’s largest at its inauguration in March—found that things were nowhere near that simple.

The small nation of the United Arab Emirates (UAE), despite having the world’s seventh-largest proven reserves of both oil and gas, has been working hard to diversify its economy over the past two decades. Though hydrocarbons still account for the large majority of its economic activity and more than 80% of government revenue, it has managed to significantly reduce the share of hydrocarbons in its total export figures.

But the rapid growth of its financial and international trade sectors over the past decade has meant equally rapid growth in electricity demand, which has stretched the UAE’s grid to its limits. According to International Energy Agency estimates, the UAE’s electricity consumption in 2011 was 83.79 TWh, a more than 50% increase since 2001. Installed capacity, almost entirely natural gas–fired thermal plants, was 23.25 GW in 2009, according to the Energy Information Agency. Despite its ample gas reserves, the UAE is also working to diversify its generation portfolio, having contracted with Korea Electric Power Corp. to construct four nuclear reactors, two of which are now under construction, with the first scheduled to come online in 2017 and the others expected to be completed by 2020.

The country is also looking to boost renewable generation. To this end, Abu Dhabi, the largest emirate, formed the Masdar initiative in 2006, with a focus on development of renewable and sustainable energy technologies. Masdar is a subsidiary of Abu Dhabi’s state-owned Mubadala Development Co. Masdar’s flagship project is Masdar City, which aims to be the world’s first low-carbon municipality. Located just outside the capital, it currently houses the Masdar Institute, a joint effort with the Massachusetts Institute of Technology. A number of other high-technology and renewable energy businesses and organizations are planning to set up shop in Masdar City, among them, the International Renewable Energy Agency, Siemens Middle East, and GE. Masdar has invested in a variety of renewable energy projects, most notably a 20% share in the 630-MW London Array in the UK, currently the world’s largest offshore wind farm.

Still, the overall goal of Masdar is to diversify the emirite’s energy sector. In the late 2000s, it began planning for a major solar power plant in the UAE to be called Shams—“Sun” in Arabic.

While a desert location might seem like the ideal spot for a concentrating solar power (CSP) plant, in fact, making one work in such an area carried with it a number of significant challenges that the designers had to overcome in planning the project. The original design for Shams 1 was proposed in 2007, and Masdar tendered the project for bids in 2008.

Because the coastal areas of the UAE are at a premium in terms of occupancy and land values, and because such areas have lower insolation, the project needed to be located in the southern region of the country. These areas, however, are characterized by loose and sandy soil, high winds, and high dust levels, as well as large rolling sand dunes.

Early research for Shams revealed that, because of the dust in the atmosphere, the site had surprisingly low direct normal irradiance (DNI) levels of under 2,000 kWh/m2/yr. This is quite a bit less than that received by CSP projects in Spain and the U.S., where DNI levels can reach 2,700 kWh/m2/yr. Initial estimates of DNI for the site—based on satellite data—had been substantially higher, which meant that adjustments needed to be made in the design. This discovery led Masdar to withdraw the tender and go back to the drawing board.

Two approaches were developed to combat the problem of higher mirror soiling. First, a seven-meter-high windbreak was built around the entire site to reduce the amount of ground-level sand and dust blown onto the mirrors. After extensive research, project planners settled on a design composed of both concrete and semi-porous fencing material. In addition to reducing windblown dust, the windbreak reduces the wind load on the mirrors and limits the movement of the sand dunes around the site.

Second, additional automatic mirror-cleaning trucks were added to the operations and maintenance plan in order to increase the frequency of cleaning. This allowed the entire site to be cleaned in a three-day cycle.

But the additional cleaning implicated another challenge of the location: An extreme shortage of water. Though water used for cleaning the mirrors is collected and recycled to the extent possible, the project team had to consider a number of approaches for meeting the site’s water needs, not just for cleaning but also for cooling the steam cycle. Coastal areas of the UAE rely largely on desalinated water, but the high cost of it, combined with the 60-km distance from ocean, made piping or shipping water to the site far too expensive. The use of gray water for plant cooling was studied but found to be unworkable.

All of this meant that an air-cooled condenser (ACC) would be necessary (Figure 1). However, while this would greatly reduce water requirements, it would also reduce the plant’s efficiency, as ACCs do not function as well in very hot climates such as the one at this site, where summer temperatures can exceed 120F.

These challenges meant that several changes would be needed to the design of the plant if it was to be able to meet its specified output.

First, additional solar collectors were added to the original design. Next, a high-efficiency steam turbine was custom-designed by MAN to allow operation at high turbine efficiencies at the higher vacuum pressures that would exist at high operating loads. Finally, the use of natural gas firing was changed. In typical CSP plants, natural gas is often burned to smooth out intermittency during cloudy periods. At Shams, however, low levels of gas are burned continuously to increase steam temperature from the 380F maximum from the solar collectors to 540F. This higher temperature increases the overall efficiency of the plant. In normal operation, natural gas contributes about 18% of the total heat input but about 45% of the net electricity output. Abundant, inexpensive natural gas in the region makes the approach economic.

Abengoa Solar and Total were selected in 2010 to develop Shams 1 on a 25-year build, own, operate basis. Masdar owns 60% of the Shams Solar Power joint venture, with the other two holding 20% each. Construction began in June 2010, and the $600 million project was completed in late 2012.

The 2.5 km2 plant comprises 768 parabolic trough collectors that heat synthetic oil that is used to produce steam in a Foster Wheeler solar steam generator for the 125-MW MAN turbine. The air-cooled condensers were supplied by GEA. Overall, the design changes actually make Shams 1 about 3% to 8% more efficient than a typical CSP plant, despite the challenges of the site.

One key goal of the Shams project is unrelated to renewable energy. Like other countries in the Gulf region, the UAE relies heavily on foreign labor: Estimates are that less than 1% of the private workforce is Emirati. While the majority of the construction force was not local, efforts were made to foster local skills and local employment. More than 60 local companies were involved in the construction, many of which were formed specifically for the project. A number of Emiratis also worked with Abengoa’s CSP projects in Spain to gain the necessary skills to work at Shams. Currently, 30% of the plant workforce is Emirati, and plans are to increase this to 40% over the next two years. Local students will be trained at the plant until they are ready to join the staff.

The importance of Shams to the UAE can be judged from the sentiments of Sheikh Khalifa bin Zayed Al Nahyan, president of the UAE and ruler of Abu Dhabi, who officially inaugurated the plant in March. “Shams 1 is a strategic investment in our country’s economic, social and environmental prosperity,” he said. “The domestic production of renewable energy extends the life of our country’s valuable hydrocarbon resources and supports the growth of a promising new industry.”

At the time of its inauguration, Shams 1 was the largest CSP plant in the world, though it has since been eclipsed by projects in the U.S. At the dedication ceremony, Masdar CEO Dr. Sultan Ahmed Al Jaber said, “We are now producing close to 10% of the world’s installed CSP capacity and almost 68% of the GCC [Gulf Cooperation Council] region’s renewable energy capacity. The UAE has become the first country in the Middle East and OPEC to produce both hydrocarbons and renewable energy.”

For taking the lead in renewable energy in a fossil-fuel dominated region despite numerous challenges, Shams 1 is a deserving POWER Top Plant. ■