New flue gas desulfurization (FGD) units are being installed at utilities in many parts of the U.S. and a large percentage of the new scrubbers are of the wet limestone type. Although wet limestone scrubbing is a well-developed technology, it may be unfamiliar to employees at plants that have previously not required scrubbers. This article provides a primer in the process.

Wet limestone scrubbing is a classic example of an acid-base chemical reaction performed on an industrial scale. In this case the acid is sulfur dioxide (SO2) in the flue gas. The base consists of calcium carbonate (CaCO3) and, generally, to a much smaller extent, magnesium carbonate (MgCO3), in the limestone. Scrubbers typically utilize slurry sprays to initiate the first step in the process, which is the transfer of sulfur dioxide into the liquid phase (Figure 1). A common term that one hears in the industry is liquid-to-gas, or L/G ratio. A not uncommon L/G ratio is around 120 gallons per minute (gpm) liquid flow per 1,000 actual cubic feet per minute (acfm) gas flow, although this ratio is dependent upon the scrubber type and the concentration of SO2 in the flue gas. Sulfur dioxide reacts with water as illustrated by the general equilibrium reactions expressed in the equation below. 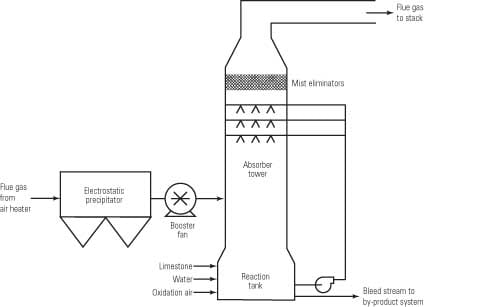 The calcium carbonate (CaCO3) in limestone is only slightly soluble in water, but in the presence of acid, it reacts much more vigorously. It is the acid generated by absorption of the SO2 into the liquid that drives the limestone dissolution process.

Equations 1 and 2, when combined, illustrate the primary scrubbing mechanism.

The initial reaction products, calcium and sulfite ions, will by themselves precipitate as a hemihydrate and where water is actually contained in the crystal lattice of the scrubber by-product.

However, oxygen in the flue gas has a major impact on chemistry and, in particular, on by-product formation. Aqueous bisulfite and sulfite ions react with oxygen to produce sulfate ions (SO4-2).

Approximately the first 15 mole percent of the sulfate ions co-precipitate with sulfite to form calcium sulfite-sulfate hemihydrate [(CaSO 3 ·CaSO 4) ·&frac12; H2O]. Any sulfate above the 15% mole ratio precipitates with calcium as gypsum.

Scrubber technology has advanced considerably over the past three decades. Today scrubber systems with just a single module can service a large boiler. Previously, multiple modules were necessary. However, new technology developments are continuing.

A common design for modern scrubbers is the open spray tower. First- and second-generation scrubbers were often equipped with internal packing or trays to enhance gas-liquid contact. Unfortunately, this material, particularly packing, introduced two major difficulties. The material alone increased pressure drop through the towers, which in turn increased fan requirements. Second, the packing frequently served as an excellent site for scale buildup. This aspect further increased the pressure drop and exacerbated maintenance and labor costs to keep scrubber towers clean and operating at full load.

At one power plant (not the only one, to be sure) the scrubber scale caused sections of the packing material to fuse together and caused unit derating even when it was on a semi-annual maintenance outage schedule.

Spray nozzle technology has improved greatly since scrubbers were first installed on utility units. It is now possible to achieve 98% to 99% SO 2 removal in systems with no packing or trays. An important aspect is that the nozzles and nozzle pattern are designed and configured to prevent flue gas from channeling through weak spots in the flow pattern.

Calcium sulfite-sulfate hemihydrate is a soft, difficult-to-dewater material that has little practical value as a chemical commodity. For this reason, many existing scrubbers are equipped with forced-air oxidation systems to introduce additional oxygen to the scrubber slurry.

A properly designed oxidation system will convert all of the liquid sulfite and bisulfite ions to sulfate ions. Sulfate precipitates with calcium as gypsum, which typically forms a cake-like material when subjected to vacuum filtration. Modern scrubber systems can produce gypsum "cake" with as little as 10% moisture, which makes it very easy to handle. FGD-produced synthetic gypsum has become a favorite of wallboard manufacturers.

This factor is very important for utility managers pondering the installation of forced-oxidation systems. However, logistics and market capacity may prevent sale of the gypsum. Planning for new systems should include careful examination of the future gypsum market and the plant’s ability to transport the material to a wallboard manufacturer. Cement companies are other possible buyers for the material.

When sizing the blowers for a forced-oxidation system, a rule of thumb is that enough air must be injected to provide from one to four parts of oxygen per part of sulfur dioxide removed. If the plant has, or anticipates securing, a contract to sell the gypsum by-product, it is imperative that the oxidation system has the required capacity and operates reliably.

Limestone reactivity is another key factor. In general, limestone with 94% or greater calcium carbonate content provides excellent alkalinity for reaction. However, at times it is not possible, or economically feasible, to acquire such pure material. Impurities in the stone may cause significant operating difficulties.

Magnesium, a common substitute for calcium, can be helpful or harmful, depending upon its chemical makeup within the stone. If the magnesium exists as homogenous magnesium carbonate (MgCO3), it can enhance SO2 removal by providing extra alkalinity to the scrubbing solution. However, magnesium often co-exists with calcium in a crystal matrix known as dolomite (CaCO3 ·MgCO3). Dolomite is unreactive, and stones containing a significant amount of dolomite may require excess feed to achieve the required SO 2 removal.

Limestone typically contains inert materials, including siliceous compounds such as quartz. These have different densities than the scrubber by-product and may negatively influence performance of slurry separation devices. Iron in limestone can form oxides that plug vacuum filter cloth. The iron can also influence gypsum scale formation on scrubber vessel internals. Nonetheless, this is usually not a problem in forced-oxidation systems.

Limestone reactivity is greatly influenced by particle size. A typical method of preparing limestone slurry is to grind the raw limestone with water in a ball mill. This produces a suspended solution of fine limestone particles (slurry), which is then pumped to the reaction vessel. Smaller particle size increases the total surface area of the limestone reactant. Grind size is determined by passing a slurry sample through progressively smaller sieves.

A typical specification for grind size in first-generation scrubbers was 70% passage through a 200-mesh screen. However, scrubber designers, operators, and chemists came to realize that this size was too coarse to promote good utilization. Nowadays, 90% or greater passage through a 325-mesh screen is a standard requirement.

Even with a well-ground, high-purity limestone, utilization may fall short of expected levels. A modern approach is the use of additives to enhance performance. One of the most popular of these is adipic acid (HOOCCH2CH2CH2CH2COOH), commonly known as dibasic acid (DBA). DBA functions by assisting limestone dissolution, which in turn increases sulfur dioxide removal kinetics. Supplemental DBA feed represents a practical approach for enhancing the SO 2 removal performance of existing scrubbers.

Over the years improvements have been made in the choice of scrubber vessel construction materials. During combustion, chlorine in the coal converts to hydrogen chloride (HCl). HCl is an acid, which reacts with the limestone to produce calcium and magnesium chloride (CaCl2 and MgCl2). Both are very soluble salts. Chloride concentrations may reach several thousand parts per million (ppm) or higher, depending on how tight the water balance is within the scrubber.

Many first- and second-generation designs incorporated stainless steels for their system components. Unfortunately, these materials proved to be unstable when exposed to high chloride concentrations. Chlorides penetrate the protective oxide layer on stainless steels and initiate pitting. Various inorganic and organic linings have been tested over the years, but these often failed due to poor application or simply the stressful nature of the scrubber environment. Even titanium will fail in the presence of porous slurry deposits that allow chloride to concentrate at the metal substrate.

Nickel-based alloys have proven successful in withstanding severe scrubber environments. A retrofit technique for some scrubber components, such as scrubber vessel outlet ducts, is overlay of the base metal with a corrosion-resistant material. Most common have been the high-nickel alloys such as C-276 or C-22. These and other chloride-resistant materials are now being used in other scrubber locations.

Because gypsum is a very stable and benign material, gypsum disposal can include landfilling, where the slurry can be sent to retention ponds. Some utilities have enough land that the retention ponds can be sized to serve as evaporation ponds so that liquid discharges are not an issue.

Disposal requirements will undoubtedly become more important due to water conservation issues. Plant personnel are facing regulations that require minimized or zero liquid discharges. As a consequence, no longer can a scrubber be planned without giving thought to liquid discharge issues.

To make sure that process conditions remain steady and that corrosion is minimized, reliable and regular analysis of scrubber liquids and solids is necessary. Typically, on-line pH monitors are employed for process chemistry control. A common pH range in scrubber modules is 5.6 to 5.8. At these slightly acidic conditions proper SO2 removal can often be balanced by good limestone utilization.

Some companies offer a chloride titration kit that is very easy to use. Another analytical method is ion chromatography for those plants willing to spend more money on instrumentation.

Analysis of solids is very important for scrubber operation. For this purpose thermogravimetry is better than utilizing wet chemistry techniques.

Analysis by thermogravimetry is simple in concept. A TGA functions by weighing samples on a precise analytical balance as they are heated. Most instruments are designed so that samples can be analyzed in user-selectable atmospheres. Bottled gases are connected to the furnace compartment by a manifold, tubing system, and an automated sample-switching device. A preferred atmosphere for scrubber process samples is nitrogen.

Because TGA is a quantitative not a qualitative instrument, the operator needs to have a good idea of the primary constituents in the sample before analysis. If the individual compounds decompose at distinct and separate temperatures, it becomes easy to calculate the concentration of the original materials. Wet limestone scrubber by-products lend themselves well to this technique.

Figure 2 illustrates a TGA analysis of a pre-dried scrubber solids sample containing all three of the major constituents. We will ignore the decomposition shown at 600C, as this is due to unburned carbon from flyash in the sample. 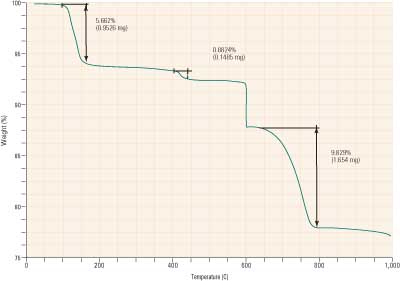 As is evident, the decompositions outlined in equations 7 through 9 are clearly visible on the analysis plot. This particular scrubber does not have a forced oxidation system, so some calcium sulfite-sulfate hemihydrate is present, as evidenced by the decomposition beginning at 400C. In addition, there is an excessive concentration of calcium carbonate in the by-product.

Efforts to improve reactivity in the scrubber and reduce the concentration of unused reagent in the by-product can save several thousands of dollars annually for each percentage that the concentration is lowered.

Where a precipitator or baghouse is placed upstream of the scrubber, FGD by-product quality may be very good. Figure 3 illustrates the analysis of just such a sample. The gypsum concentration typically is 96% or greater with only 1% or 2% of unreacted limestone. Wallboard manufacturers have purchased this material for years. 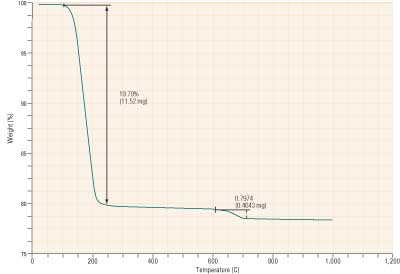 Scrubbing to remove flue gas sulfur dioxide will become a fact of life at many utilities that formerly were exempt from the process. Given the high turnover that has begun at utilities around the country due to retirements, many plant personnel will be introduced to an unfamiliar technology. The recent resurgence in coal plant construction will also introduce plant personnel to scrubbing technologies.