In a move that could boost the value of wind and nuclear generation, relieve stress on the nation’s transmission grid, and reduce utility carbon emissions, PSEG Global LLC and energy storage pioneer Michael Nakhamkin have announced that they have formed a joint venture to market and deploy “second-generation” compressed air energy storage technology.

The joint venture, Energy Storage and Power LLC (ES&P), will market and license the updated compressed air energy storage (CAES) technology, which builds on technology Nakhamkin developed and deployed nearly two decades ago in the nation’s only CAES plant, a 110-MW unit in McIntosh, Ala., owned by PowerSouth Energy Cooperative. The world’s only other CAES plant is in Germany.

CAES technology uses electricity to compress air into a suitable underground geologic formation or in canisters above ground. When electricity is needed, air is withdrawn from the storage system, heated by a gas-fired burner and run through an expansion turbine to drive an electric generator. 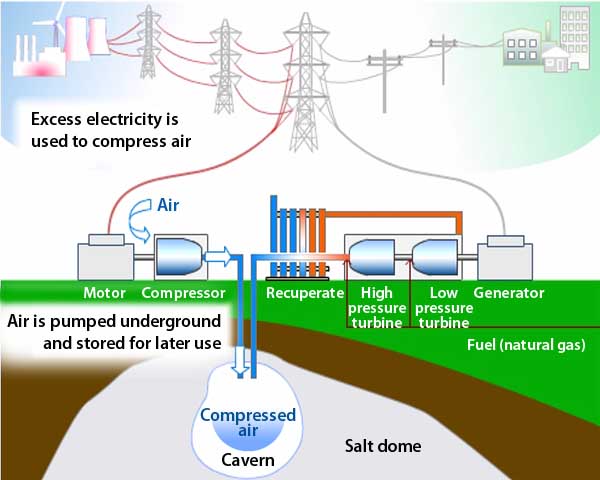 1. The principal benefit of a compressed air energy storage project is its ability to shift electricity production to periods of high demand. The first step is to produce electricity during “off peak” hours to compress air that is stored in an underground cavern. Source: Ridge Energy Storage & Grid Services LP 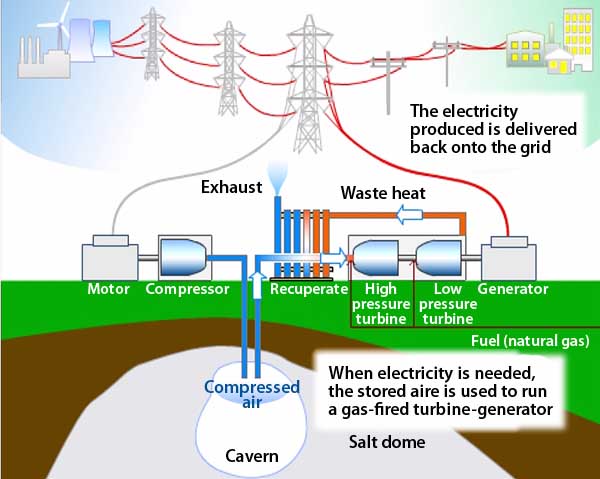 2. The compressed air is then expanded through a turbine during “on-peak” hours to produce electricity when demand is high. Source: Ridge Energy Storage & Grid Services LP

ES&P officials believe that broad deployment of second-generation CAES will enhance the value of large-scale wind generation and other intermittent renewable energy resources by converting them to firm, dispatchable resources. The technology also provides a host of other benefits to utilities and the nation’s electricity system, they said.

For example, rather than using a separate gas-fired burner to heat the air, the new CAES system employs an air expander that uses waste heat from a combustion turbine. The heated air is then mixed with gas for firing in the turbine. This improvement increases the plant’s efficiency and reduces the amount of gas used to generate a given amount of power.

And Byrd said “PSEG Global could become a customer” of ES&P. PSEG Global is eyeing the possibility of building a CAES plant to store power from a proposed offshore wind farm the company is bidding to build off New Jersey’s coast.

The refined technology will help utilities on several fronts, addressing problems that are vexing industry leaders and policymakers across the country, Byrd said. For example, when wind or any other generation goes down unexpectedly, CAES plants can quickly release power to stabilize the system.

“We think this will be very important for customers who are focused on grid stability,” Byrd said. “We see a very rapid response rate in second-generation CAES.”

The technology also has the potential for reducing the use of gas during peak demand periods, he said.

“The [price] delta between on- and off-peak gas has increased substantially over the past few years,” Byrd said. “CAES will allow us to avoid needing high-priced gas generation during on-peak periods.”

Roy Daniel, who has served PSEG in a variety of positions since 1994, will be chief executive officer of the new company. He said ES&P initially sees two main markets for CAES. The company will target larger, 300-MW plants using large-scale underground storage, and a small-scale system that uses above-ground storage canisters.

Daniel said studies by the Electric Power Research Institute (EPRI) indicate that as much as 80% of the U.S. has geology suitable for compressed air storage. One 300-MW CAES plant would require 22 million cubic feet of storage space—about one-third the size of Giants Stadium in New Jersey—to store eight hours’ worth of electricity (Figure 3). 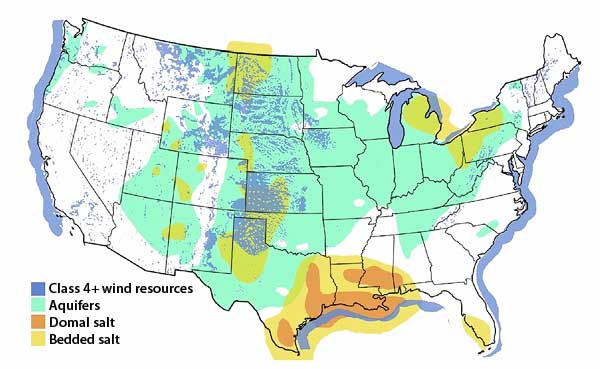 With as much as 8 trillion cubic feet of underground storage space potentially available, according to the EPRI studies, there is room for hundreds of 300-MW CAES plants across the nation, Daniel said.

The smaller systems, which can generate about two hours of electricity, are targeted for utility systems to reinforce transmission systems. These systems will compete with utility-scale batteries and similar electronic systems, and CAES will have a huge cost advantage, Daniel said.

Nuclear Could Derive Benefits as Well

While ES&P sees a huge potential for CAES to grow in lockstep with the burgeoning wind energy sector, Arshad Mansoor, EPRI’s vice president of power delivery and utilization, said wind is not the only generation source that will benefit from the updated technology. Mansoor said that the expected renaissance of nuclear power will pose challenges for utilities that CAES is ideally suited to meet.

“Nuclear is an inherently stable source of power, so stable that we don’t want to ramp it up and down,” Mansoor said. “Nuclear will need storage at night, when demand is low, and we really are looking at hundreds of megawatts of storage to meet that need.

“We asked the question, ‘if we need bulk storage in our portfolio in the next five- to 10-year timeframe, what technologies are available?’ There are lots of options, but we need options that are cost effective and deployable in that time frame. One is pumped storage hydro, but . . . the siting considerations are not good. The only answer we were left with is compressed air.”