Carbon capture and storage (CCS) has of late gained steam as the best way to mitigate emissions of the greenhouse gas carbon dioxide (CO2) from fossil fuel power plants, despite evidence that the approach would require much energy and increase the fuel needs of a coal-fired plant by more than 25%. A new study from Harvard University’s Belfer Center for Science and International Affairs now asserts that levelized costs for a precombustion capture plant with CO2 compression — excluding costs of transport and storage and any revenue from enhanced oil recovery (EOR) — are going to be much more than most people realize.

The July 3 report, "Realistic Costs of Carbon Capture," finds that electricity produced by the first coal power plants built to employ precombustion capture and compression technology could cost about 10¢/kWh more with capture than conventional plants (which the report said ranged from 8¢ to 12¢/kWh). Costs of abatement were found to be about $150 per metric ton of carbon dioxide (tCO2), with a range of $120 to $180/tCO2 avoided.

But as the technology matures, significant cost reductions are expected because of increased scale, lessons learned, and technological innovations for plant integration. The additional cost of electricity with CO2 capture could reportedly plunge to about 2¢ to 5¢/kWh, with costs in the range of $35 to $75/tCO2. All costs in the report were based on 2008 data, with costs of abatement calculated with reference to conventional supercritical pulverized coal plants for both emissions and electricity costs. The average total cost of electricity produced from coal plants in 2008 was 2.75¢/kWh, according to energy analytics firm Ventyx.

This study’s levelized costs for carbon capture and compression are significantly higher than those estimated in previous studies. According to a May 2009 survey by the U.S. nonprofit group Institute of Energy Research, the Energy Information Administration’s Annual Energy Outlook 2009 puts levelized costs for an advanced coal-fired power plant with postcombustion capture and storage entering service in 2016 at $122.60/MWh (or 12¢/kWh). This compares with $103.50/MWh for an advanced coal plant of the same capacity factor, but without CCS (Figure 2). 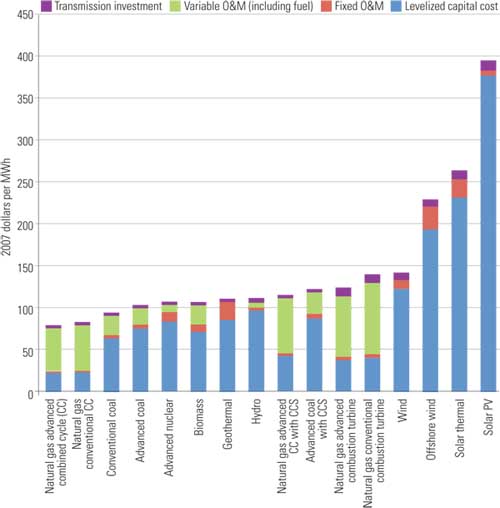 2. CCS cost controversy. A July study from Harvard’s Belfer Center estimates that electricity produced by the first coal plants to employ precombustion carbon capture and sequestration technology could cost 10¢/kWh more than estimates for conventional plants, which range between 8¢ and 12¢/kWh. A survey of levelized costs in the Energy Information Administration’s Annual Energy Outlook 2009 by nonprofit group Institute of Energy Research finds that electricity from an advanced coal plant with carbon capture and sequestration (CCS) using postcombustion capture and entering service in 2016 will cost 12¢/kWh. Levelized costs for an advanced coal plant without CCS at the same capacity factor are estimated at 10¢/kWh. Note: Capacity factors for each technology differ. Courtesy: Institute of Energy Research

The Harvard study is one of several significant CCS cost studies to have been released recently from around the world. In November 2008, McKinsey & Co. found from its assessment of information gathered from industrial CCS stakeholders that costs from the first demonstration CCS projects built in 2015 could range between €60 per tCO2 avoided. That cost can be reduced to €30 to €40 tCO2 by 2030 because of lessons learned from demonstration projects, finds the study, "Carbon Capture & Storage: Assessing the Economics."

Other studies — particularly from companies that are conducting demonstration CCS projects — put costs even higher than the Harvard study. Earlier this year, as an example, StatoilHydro concluded in a master plan for a CCS demonstration at Mongstad in Norway that CCS cost could up to €200 per tCO2.