In 2009, when the United States fell into economic recession, greenhouse gas emissions also fell, by 6.59 percent relative to 2008.

In the power sector, however, the recession was not the main cause.

Researchers at the Harvard School of Engineering and Applied Sciences (SEAS) have shown that the primary explanation for the reduction in CO2 emissions from power generation that year was that a decrease in the price of natural gas reduced the industry’s reliance on coal.

According to their econometric model, emissions could be cut further by the introduction of a carbon tax, with negligible impact on the price of electricity for consumers.

A regional analysis, assessing the long-term implications for energy investment and policy, appears in the journal Environmental Science and Technology.

In the United States, the power sector is responsible for 40% of all carbon emissions. In 2009, CO2 emissions from power generation dropped by 8.76%. The researchers attribute that change to the new abundance of cheap natural gas.

"Generating 1 kwh of electricity from coal releases twice as much CO2 to the atmosphere as generating the same amount from natural gas, so a slight shift in the relative prices of coal and natural gas can result in a sharp drop in carbon emissions," explains Michael B. McElroy, Gilbert Butler Professor of Environmental Studies at SEAS, who led the study.

Patterns of electricity generation, use, and pricing vary widely across the United States. In parts of the Midwest, for instance, almost half of the available power plants (by capacity) were built to process coal. Electricity production can only switch over to natural gas to the extent that gas-fired plants are available to meet the demand. By contrast, the Pacific states and New England barely rely on coal, so price differences there might make less of an impact (Figure 1).

To account for the many variables, McElroy and his colleagues at SEAS developed a model that considers nine regions separately. 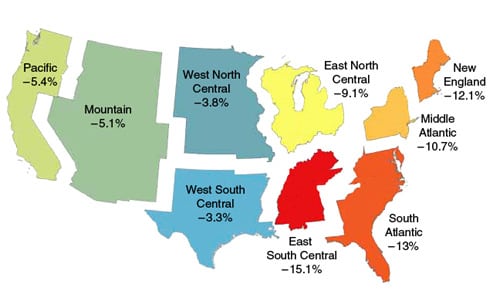 1. Changes in carbon dioxide emissions from the power sector in the nine census regions of the contiguous United States, 2008-2009. Courtesy: Xi Lu

"When the natural gas prices are high, as they were four years ago, if the gas prices come down a little bit, it doesn’t make any difference," explained lead author Xi Lu, a postdoctoral associate at SEAS. "But there’s a critical price level where the gas systems become more cost-effective than the oldest coal-fired systems.

"If the gas price continues to drop, you’ll continue to go down this curve so that you’ll knock out not just the really ancient coal-fired power plants, but maybe some of the more recent coal-fired plants."

The model also predicts that a government-imposed carbon tax on emissions from power generation would drive a move away from coal.

“With a relatively modest carbon tax—about $5 per ton of CO2—you could save 31 million tons of CO2 in the United States, and that would change the price of electricity by a barely noticeable amount,” says McElroy.

The initial model was developed by Jackson Salovaara, an applied mathematics concentrator at SEAS. His work was recognized as the "best senior thesis" in the Harvard Environmental Economics Program, earning him the Stone Prize in May 2011.

Since then, the model has been "souped up," incorporating more sophisticated regional data analysis, and producing not just the findings on 2009 but also predictions for more recent years.

"While the data from 2011 are not yet available, based on the gas prices, we’re making a confident prediction that there should be a continued shift from coal to natural gas in 2011 as compared to 2008,” says McElroy.

"That’s good news for the atmosphere."

—Caroline Perry is communications administrator at Harvard School of Engineering and Applied Sciences, Cambridge, Mass. This article was originally published on the SEAS website. The research was supported by the National Science Foundation.