Among the greatest revolutions of the modern world is one that most of us take for granted: electrification. When we flip on the light switch, turn on the TV, or plug in our cell phones, power is there, 99.99% of the time. But not long ago, that wasn’t the case. As late as the 1930s, nine out of 10 rural homes in the U.S. did not have electricity.

The way we achieved electrification was through a combination of new technologies, continual improvements in engineering, and policy support that maximized reliability while minimizing cost. The benefits of electrification have been enormous, but unintended consequences—chiefly, greenhouse gas emissions—have inspired the need for innovation.

Today we find ourselves in a world where new values are taking hold, among them: sustainability, customer choice, and expanding access to energy in the developing world. Developing an electric grid (and perhaps many smaller distributed grids) consistent with these values will require new technologies, new ways of thinking, and new regulatory frameworks.

For much of the utility industry, “new” typically means one thing: risk. But what if we could turn a high-risk challenge into a low-risk opportunity—and in doing so, offer a future where the unintended consequences of the energy system are minimized while the core benefits are maintained? Doing so might be easier than you think.

One way we’re doing this is through the $20 million NRG COSIA Carbon XPRIZE, a four-year competition that challenges anyone from anywhere in the world to develop innovative approaches for converting CO2 emissions into valuable products. The teams that convert the most CO2 from a working power plant into products that have the highest value will share in the $20 million prize.

Some people think prizes are a new idea. That’s only true if your idea of new is 300 years old. From the 1714 prize to create a system for determining a ship’s longitude, to Napoleon’s 1795 cash prize for a new method to preserve food during battle, and the 1919 prize for the first nonstop trans-Atlantic flight (won by Charles Lindbergh), prizes have been de-risking innovation for centuries. In fact, prizes are an elegant tool with a long history and a clear record of success.

In traditional R&D, investors provide money up front and, as we like to say, “pray for success.” Conversely, in a prize model, teams must demonstrate performance before the prize is awarded, and hence prizes “pay for success.”

Prizes typically leverage investment totaling 10 times the amount of the purse, and they incentivize teams to push the boundaries of performance as they try to win. As a result, a much larger number of players bear the risk of searching for a breakthrough, and the chances of identifying a solution increase exponentially.

Prizes also serve as a platform for engaging a broad community, including new players from unexpected places. We regularly see competitors become collaborators, sharing both ideas and resources in pursuit of the best solutions. And we see industry skeptics become champions—and customers—for new technologies developed through competitions.

These are just a few of the reasons why prizes are increasingly being offered by a variety of organizations, from innovative corporations like Google and Netflix, to government and educational institutions like the Department of Energy, Georgetown University, and the Swiss nonprofit La Fondation Bundi.

Even with prizes, new energy technologies can fall into the Valley of Death without innovative partnerships.

In the tech sector, new software or apps can be created, released, and distributed in a matter of months—and any bugs fixed later. Conversely, energy innovators typically need access to existing infrastructure in order to prove their technologies will be viable in the real world and attract the investment necessary to achieve commercial scale. However, utilities and other industry players are often legitimately concerned about connecting something new and unproven to a power plant or grid system.

As we developed the Carbon XPRIZE, this was a critical barrier we knew we needed to address. Fortunately, we found leaders who were willing to think creatively about the problem.

Two of our partners (both of which are in regions better known for fossil fuels than Silicon Valley–style innovation) have committed to build testing and commercialization centers at existing power plants where teams competing for the prize can try new things, have a safe space to fail, and ultimately demonstrate successful solutions. In return, the utility hosts are positioned to get a first-hand look at some of the best emerging technologies, not to mention a potential market advantage in scaling and adopting new solutions to address CO2 emissions. Both partners figured out ways to enable innovation without running afoul of their business models or existing regulations.

Change is always hard. As humans, we’re hard-wired to continue doing things the way they’ve always been done. But just because change is difficult, it doesn’t have to be risky.

To successfully transition to a 21st century energy system, tools that de-risk opportunities and leverage diverse investment will be absolutely essential. But these tools can also create competitive advantage for power generators and innovators alike, no matter what energy revolution is to come. ■ 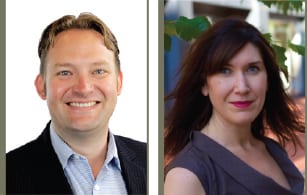