Despite robust growth and recent improvements in price and performance, a boom in U.S. clean energy technology ("clean tech") sectors could now falter as federal clean energy spending declines sharply, according to a new report published by some of the country’s top energy analysts.

To both sustain clean energy growth and put the United States’ clean tech sectors on an accelerated path to subsidy independence and global competitiveness, analysts at the Breakthrough Institute, Brookings Institution, and World Resources Institute counsel a thorough revamping of American clean energy policies to prioritize innovation and cost declines.

The rewards for smart policy reform now are enormous: with global energy markets hungry for clean, affordable energy technologies and clean tech markets continuing to mature and improve, this is exactly the time for America to secure its leadership in clean tech.

Clean energy sectors have surged in recent years, driven by both private sector innovation and entrepreneurship and a historic expansion of federal support for clean tech sectors. Renewable electricity production has expanded; prices have fallen for wind, solar, advanced batteries, and other clean tech products; and construction has begun on the first U.S. nuclear reactors in decades. Clean tech firms were among the few to add jobs during the depths of the great recession, with employment in the sector expanding 12 percent from 2007 to 2010.

Yet clean tech owes much of this growth to historic federal policy support, which the new report estimates will total $150 billion from 2009 to 2014—a three-fold expansion from cumulative 2002-2008 totals.

Now, much of that support is set to decline, as stimulus funds dry up and a number of tax credits and other programs reach their sunset dates or volumetric limits. Without Congressional action, federal clean tech support is slated to plunge 75 percent from 2009 to 2014, the report estimates. America is now at a key inflection point, with federal clean tech funding this year set to decline 50 percent from 2011 levels (Figure 1). 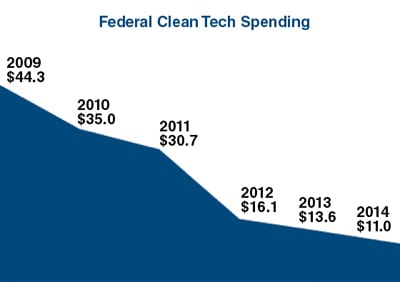 1. Federal clean tech policy support is falling off a cliff. Values are in billions of dollars. Source: Beyond Boom & Bust: Putting Clean Tech on a Path to Subsidy Independence.

Despite a 27 percent improvement in wind turbine prices from 2008 to 2011, the boom in cheap shale gas has moved the goal posts for wind power, which is now cost competitive without subsidy only at the best wind sites near existing transmission lines. Solar prices have plummeted in the last few years and are now within reach of "grid parity" with retail electricity prices in several sunny states with high-electricity costs. Yet rooftop installations are only fully subsidy independent in Hawaii, with its extremely high electricity costs, and without subsidy, central station solar PV and thermal plants cannot yet compete in wholesale markets against low-cost gas plants. An American renaissance for nuclear power will also be severely limited unless capital costs for new reactors fall significantly (Figure 2). 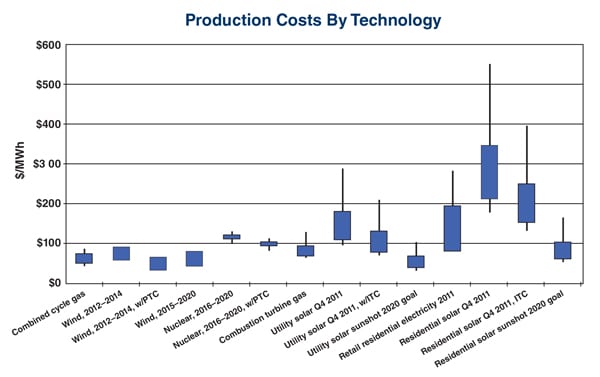 Costs pose barriers to electric and plug-in hybrid vehicles and advanced biofuels as well. And smart grid, high-speed rail, and many energy efficiency technologies require policy support to overcome infrastructure, finance, and other barriers to adoption.

Yet this is exactly the wrong time for America to walk away from these clean energy technologies.

What’s needed is renewed support for clean tech sectors that charts a new path toward subsidy independence. Policy makers should reform clean energy subsidies to reward innovation and help to develop a robust industry that can thrive without public subsidies.

The headwinds facing clean energy technologies are more the result of growth and success than a sign of mounting failure. Like any fast-growing sector, the boom in clean tech markets has attracted numerous new competitors. And as clean energy industries grow to become more substantial contributors to America’s energy mix, the costs of the subsidies once necessary to jumpstart industry growth are mounting. A renewed focus on innovation and technology improvement is the key to overcoming both challenges.

What should a smarter deployment policy designed to spur both market demand and continual innovation look like?

The authors recommend policies that provide sufficient certainty for investment decisions, but also set expectations that subsidy levels will decline over time. They would promote a diverse energy portfolio and maximize the impact of taxpayer resources by limiting transaction costs and ensuring clean tech can efficiently access affordable private capital. And they would reward innovators who deliver better prices or performance.

Whether through tax credits or payments for clean power producers, consumer rebates for electric vehicle purchase, or performance standards for new vehicles, fuels, or power plants, a new suite of clean tech deployment policies must simultaneously drive both market demand and continual innovation.

But subsidy reform alone will not be enough. The United States must also leverage its strengths as an innovation leader and increase funding for energy research and development. It must support a robust innovation system that harnesses advanced manufacturing capabilities, regional industry clusters, and a high-skilled energy workforce.

In exchange for sustained support, policy makers should demand that industry focus laser-like on reducing costs through innovation. Cost-competitiveness with fossil fuels is achievable. But until that point, clean tech companies will remain under threat of subsidy-expiration and political uncertainty. Innovation is the only route beyond the policy-driven boom and bust cycles that imperil the industry.

The time has come for a new clean-energy framework, one that accelerates technology innovation and reduces costs, guarantees that scarce public resources will be used wisely, and continues the maturation of the nation’s most competitive clean tech industries.

—Alex Trembath and Jesse Jenkins are energy and environmental policy analysts at the Breakthrough Institute, where this article first appeared. Reprinted by permission.