Between 1998 and 2002 the U.S. experienced an unprecedented power plant construction boom that consisted mostly of gas-fired, combustion turbine – based power plants. This surge in power plant construction had several driving forces, including electric power deregulation, the emergence of non-utility power producers, a sustained period of plentiful and inexpensive natural gas, and the availability of efficient and cost-competitive combustion turbine technology.

However, the foundation of this construction boom crumbled quickly. Deregulation of the electric generation industry stalled with the California energy crisis. Non-utility power producers sold out or eventually went bankrupt. Finally, gas prices rose dramatically and today appear to have stabilized at two to three times their price in 2000.

As the demand for electricity continues to grow, new base-load generation is needed. For a variety of reasons, coal-fired generation appears to be the most likely candidate for meeting this demand. The run-up in gas prices has been sustained for several years, sparking a strong interest in coal and other solid fuel – fired power plants.

In addition to an increase in greenfield plants, Stone & Webster Management Consultants Inc. (Stone & Webster Consultants) has seen increased interest in solid fuel repowering of existing oil- and gas-fired boilers. The primary reason for this interest is that repowering an existing gas- and/or oil-fired power plant with solid fuel boilers potentially has a lower capital cost and lower development risk than developing a new greenfield solid fuel – fired power plant.

The issues that drive the technology selection decision for a solid fuel facility are:

Pulverized coal (PC) technology is probably the economic choice for any plant that will burn coal — whether it’s bituminous, subbituminous, or lignite — as the primary fuel. Circulating fluidized-bed (CFB) technology will be the choice for petroleum coke or other "opportunity" fuels.

Based on the current state of CFB development, if the unit size is greater than 400 MW, the CFB plant will require two boilers, compared with a single boiler for a PC plant. The single-boiler PC plant would normally be more cost effective, unless the fuel selection favors CFB technology.

The cost of solid waste disposal can have a significant effect on a plant’s life-cycle costs. Units burning subbituminous coal can usually sell the flyash. In addition, there is potential for selling the gypsum produced by wet flue gas desulfurization (FGD) systems.

A number of environmental issues typically impact the design and economics of a repowering project. Many are specific to the project location and current operations of the generating units to be repowered. However, the air emissions control requirements for every repowering project have a major impact on space requirements, site layout, transportation requirements, solid waste disposal, and life-cycle costs.

"Netting out" of New Source Review requirements is unlikely for facilities with existing oil- or gas-fired units that are to be repowered with solid fuel boilers. This is due to low air emission rates and low historical capacity factors that are typical for oil- and gas-fired facilities. If the new boiler is located in an attainment area, as classified by the National Ambient Air Quality Standards, the new boiler will be required to install best available control technology (BACT) for each pollutant emitted in excess of its significance level.

The final Clean Air Mercury Rule includes a cap-and-trade system for new and existing coal-fired generating units. This rule will apply to repowering and new brownfield projects. Based on the rank of coal used and the FGD system employed, both of the options would be subject to New Source Performance Standards for mercury. There have been a number of Powder River Basin (PRB) coal projects with dry FGD that have mercury emission limits requiring activated carbon injection systems.

The majority of recently permitted PC projects using eastern bituminous coals have not required additional mercury controls. These projects have relied on the "co-benefit" mercury reductions expected from the air pollution control system for SO2, NOX, and PM. Control of carbon monoxide (CO) and volatile organic compounds (VOC) emissions from PC and CFB boilers can be accomplished with good combustion practices.

Section 316(b) of the Clean Water Act requires the Environmental Protection Agency to ensure that the location, design, construction, and capacity of cooling water intake structures reflect the best technology available. This requirement is to protect aquatic organisms from being killed or injured by impingement or entrainment. The Section 316(b) rules require that all new generating facilities be cooled with cooling towers or use the equivalent cooling water of a wet cooling tower facility for the site. However, Phase II of this rulemaking for existing electric generating plants provides more flexibility for existing stations to retain their once-through cooling water usage.

The new rule allows a facility to repower or replace its existing steam turbine condenser and cooling water system with a new cooling system that uses up to 10% more once-through cooling water than the equipment it replaces. This allows older power plants to retain once-through cooling for repowering or for a new brownfield replacement unit. It should be understood that the cooling system must eventually meet new impingement and entrainment performance standards required by the Phase II rules. A submittal of a Comprehensive Demonstration Study is required no later than January 7, 2008.

A new solid fuel power plant will need to consider, in its design, the issues associated with:

When considering repowering or a new brownfield development at an existing oil- or gas-fired station, land availability is often the most critical issue. The space required for new solid fuel boilers, the associated pollution control equipment, and the stack will be greater than the space made available by removing old boilers and associated equipment.

A major reason for additional space is to accommodate fuel handling and storage, reagent handling and storage, solid waste storage and disposal, and a larger stack. Lack of space may eliminate the repowering option for some sites. The main purpose of performing a site layout as part of a repowering study is to determine if there is sufficient space for all the necessary equipment; it will also determine if there are any fatal flaws.

The "power block" is considered to be the boiler, turbine (brownfield development), air pollution control equipment, draft fans, and stack. This is assuming that the PC and CFB units will have APC equipment that meets BACT requirements. Table 2 shows the approximate area required for a 500-MW unit using a conventional arrangement with the APC equipment in series with the boiler.

As shown in Figure 2, the total land requirement, depending on the technology and fuel selections, for a 500-MW PC or CFB plant ranges between 11 and 15 acres. The land areas shown do not include the area necessary for a new turbine building, which would be required for a new brownfield project. However, a turbine building would only occupy approximately 1 acre. As a consequence, the acreage necessary for a new unit is not significantly different from that needed for the repowering option. In addition, the land area requirements shown do not include the 40 acres needed for a rail loop to accommodate full-unit trains.

Reuse of Existing Equipment and Systems

The primary attraction of repowering an existing unit, compared with placing a new brownfield unit at the same site, is the potential cost savings associated with the reuse of a large portion of the existing unit. On the surface, reuse of a large portion of the turbine and balance-of-plant systems may appear to be very cost effective. However, a review of the capital cost estimates for a variety of coal- and petroleum coke – fired repowering projects indicates that the costs to repower an existing unit can approach the cost of a new brownfield unit on the same site burning the same fuels.

The major equipment/systems that are usually considered for reuse in a repowering project include:

Careful condition assessment reviews, including appropriate nondestructive examination tests, must be conducted on any equipment that is intended for reuse.

Additionally, the modules can be adjusted for different geographic locations and scaled to different plant capacities. They can also be altered for a repowering application where existing equipment is used as-is, upgraded, or expanded. Information from the cost and performance modules is used in an economic model for evaluating repowering and new brownfield projects. 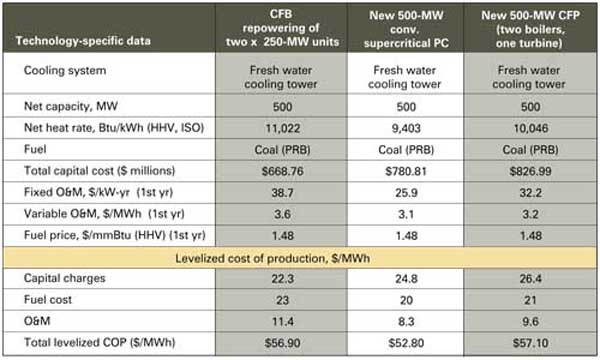 The results show that, despite the $112 million savings in project capital investment for the CFB repowering project compared with a new PC unit, the new PC unit would result in a lower levelized cost of electricity. Although the CFB repowering project is $158 million less costly than a new brownfield CFB project, the resulting levelized cost of electricity is about the same.

On the other hand, if a supercritical cycle is selected for the new brownfield CFB project, it would be more economic than repowering. This evaluation shows that the lower capital cost of a repowering project can be easily overcome by the improved performance and lower O&M cost of a new brownfield project. 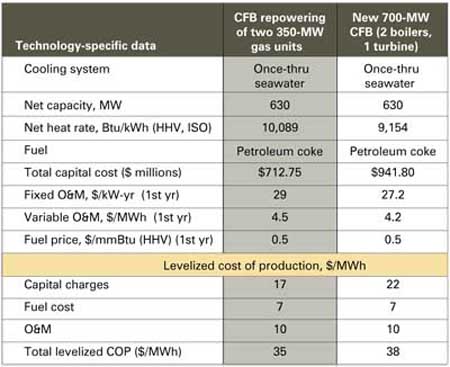 In this second example, the lower capital cost of the repowering option overcomes the improved performance of the new units, thus providing a lower levelized cost of electricity.

The two examples demonstrate how site-specific conditions, fuel selection, and technology selection can affect the final economic comparison. They also show how close the economic comparison can be between a repowering project and a new brownfield development at the same site. In order to evaluate the least-cost option based on site specific conditions, fuel requirements and technology selections, a feasibility study is essential.