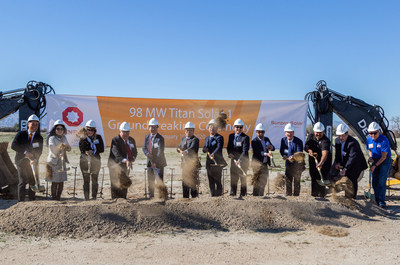 Located on a 569-acre land between the beautiful Salton Sea and Anza Borrego Desert State Park, Titan Solar 1 Project will be comprised of over 260,000 panels and will generate over 218,000 MWhs of renewable energy each year, which is enough to power over 26,900 homes annually. The project is anticipated to be operational in Q4 2020.

“At Sunpin Solar, we care deeply about our communities and environment. Titan Solar 1 is another project we will work closely with Imperial County and IID on. We are committed to providing our best expertise to build this project and more in the future,” said Tom Li, CEO and President of Sunpin Solar.

“I am super excited about this project,” said Director Cardenas from Imperial Irrigation District. “Sunpin is actually providing the gold standard when it comes to this type of project. As a public utility, it is our job to do our part to make a difference at home and for the greater good.”

“We have been in solar development since 2012. Of all the projects that have been built since then, this project is one of the most beneficial to the County of Imperial. I want to thank Sunpin for choosing the Valley,” commented Imperial County Supervisor Ray Castillo.

Titan Solar 1 Project is interconnected to the grid of Imperial Irrigation District and has a greenhouse gas (GHG) equivalency of offsetting over 154,300 tons of CO2 emissions each year. Titan Solar 1 project will create over 400 green jobs during peak construction.

A signing ceremony followed unveiling the next large solar project Sunpin Solar will build with its partner CNBM – a 120+ MW solar project in California.

Sunpin Solar also announced its recent certification as a Green Business by the City of Irvine Green Business Program as part of the California Green Business Network. This recognition signifies that we are conducting our business using strategies aimed at improving employee wellness and productivity, energy savings, water efficiency, resource stewardship and reducing CO2 emissions.