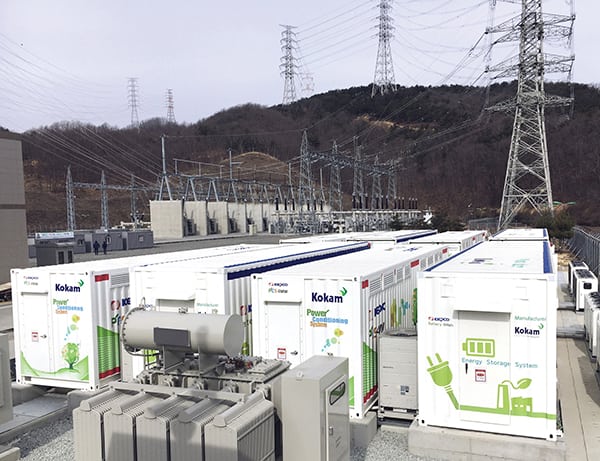 Getting the most cost-effective use out of a battery storage system isn’t just a matter of plug-and-play. Where and how you site a battery can make a big difference in how well it does its job. Several battery experts who spoke to POWER explain what you need to think about.

So you want to buy a battery? Like real estate, one big concern is location. Where you put it, and where it is in relation to other assets, matters a lot.

Non-hydro energy storage has passed out of the experimental phase and is no longer the province of visionaries imagining a grid that operates in more than one direction (see this month’s “THE BIG PICTURE: Leading the Charge”). Battery storage is big business—and getting bigger. A utility-scale battery storage system (BSS) can easily be a seven-figure (and larger) commitment.

Naturally, a lot depends on what the battery will be doing. Location issues for a BSS that is intended to smooth output from a solar photovoltaic (PV) plant or wind farm are not the same as for one designed to provide frequency regulation. Still, the location affects the battery’s performance no matter what its job is.

One threshold concern, according to Jim McDowall, business development manager for Saft, who spoke to POWER in March, is the proximity to the nearest substation.

“If you are two miles away from the substation,” he said, “you could be losing 5% of your power between the energy storage system and the point of interconnection, and that is certainly an issue in terms of the power purchase agreement.”

That means that a more remote system has to take into account transmission losses in planning the project finances.

“It’s better to have the system closest to the point of interconnection because then the battery doesn’t have to work as hard,” he said.

But it’s not always possible to place the BSS right next to the substation, as there may be no available land, and if it’s not a utility project, the utility may not be willing to make the space, or it may have other concerns about where the system belongs.

McDowall discussed a battery project in Puerto Rico that Saft is building for Windmar at the 10-MW Coto Laurel Solar Farm (Figure 1). The battery is necessary so the plant can meet the Puerto Rico Electric Power Authority’s (PREPA’s) requirements for 4.5 MW of peak power for ramp-rate control and 1 MW for frequency response. But PREPA did not want to own the battery because of its previous less-than-optimal experiences with past battery storage projects. That meant placing it on-site with the PV plant.

McDowall’s concerns were echoed by Ike Hong, vice president of South Korean battery firm Kokam’s Power Solutions Division, who spoke to POWER via email. Working for the Korean Electric Power Co. (KEPCO), Kokam recently deployed two of the largest BSSs in Korea (24 MW/9 MWh and 16 MW/6 MWh—the latter is shown in the opening photo), which were also among the largest lithium-nickel-manganese-cobalt (NMC) batteries in the world. These higher-power, lower-energy systems were designed for frequency response, which dictated where they needed to go.

“If you are looking at integrating more renewables onto the network, there is no reason to have the energy storage system located with that system to mitigate the intermittency of the generation,” he said. “Generally, it’s more efficient to locate the energy storage resource at the network level to provide that real-time generation balancing more effectively from a centralized grid resource.”

McDowall agreed. A group of renewable plants, he noted, “could have their own centralized storage system that could take care of a bunch of these facilities, because if one is ramping up when another is ramping down, those ramps might cancel each other out. So rather than having two battery systems controlling those two plants, you might find that if you aggregate a number of systems together, you do have a portfolio effect with a lot less variability.”

Hong noted as well that there are economic benefits to going bigger with a single centralized BSS.

“It makes economic sense to build projects that are as large as possible in order to reap the economic benefits of scaling,” he said. “It costs less to develop a single 24-MW project than two separate 12-MW projects. In addition, frequency regulation is most cost-effective when it can be implemented on as large a scale as possible. The cost-effectiveness of frequency response decreases when it is done on a more distributed, smaller scale.”

But that isn’t necessarily true for all applications, Ash noted. “There are applications where you can use energy storage to defer traditional infrastructure.” In those cases, you may want to place the BSS as far down the chain as you can, down where you have transmission constraints well away from a substation.

Ash pointed to Consolidated Edison’s (ConEd’s) Brooklyn Queens Demand Management Program as one example. Faced with the prospect of having to spend upwards of $1 billion to build a new substation to serve the Richmond Hill, Ridgewood, and Crown Heights neighborhoods of New York City, where subtransmission feeders would soon be overloaded, ConEd instead opted for a mix of traditional infrastructure and nontraditional customer-sited demand management, including battery storage. The total cost is projected to be about half that of a new substation.

Very large BSSs can also replace peaking generation, Ash noted, as with the 100-MW system that AES is building for Southern California Edison (SCE) in Long Beach, Calif. (see “Batteries Are Carving Out Space on the Grid” in the May 2015 issue).

“One of the bigger options if you are looking at energy storage is replacing peaker plants as a means of meeting peaking capacity.” The SCE project, Ash said, will be located where the demand for peaking generation exists. “The capacity is specifically in the LA basin where we have the interconnection to provide peaking capacity.”

But location for a BSS matters for reasons beyond its role on the grid. Unlike peaking generation, batteries have very low noise profiles and no emissions, Ash noted. “Largely, it just sits there; it is automated, it is quiet, so you can put it in adjacent neighborhoods and similar areas, and you can wrap it in whatever you want it to look like. A lot of providers are incorporating them into the local look and feel of the neighborhood” in ways that aren’t possible with a substation or peaker plant.

What that means is an opportunity to bolster resiliency and reliability in areas that might resist more obvious infrastructure, and to build community and customer support if you do it right, Ash said.

“It has been our experience that communities tend to be very supportive of this technology because it is helping address constraints where the utility would otherwise have to put in some alternative transmission and distribution infrastructure. You don’t get the pushback you would get with a new substation or new overhead lines.”

Hong also noted that new, higher-density batteries can pack a lot of capacity into a small footprint. With its project for KEPCO, the utility “wanted to limit the real estate used for each project.” Kokam’s new ultra-high-power NMC battery technology allows it to put 2.4 MWh of energy storage in a 40-foot container, compared to 1 MWh to 1.5 MWh of energy storage for standard NMC batteries.

But with that smaller footprint and closer proximity to the community comes other concerns.

“One key consideration when packing a lot of energy storage into a small footprint is cooling of the batteries,” Hong said. “Most large energy storage systems require cooling systems, and when you are seeking to maximize the amount of batteries stored in each container, cooling becomes even more important. This can increase costs, as the heating ventilation and air conditioning (HVAC) systems in the containers can end up using a significant amount of electricity.”

More powerful HVAC systems can also increase the noise a BSS generates. Kokam addressed this issue in its BSSs for KEPCO by focusing the HVAC system so it cools the battery racks directly rather than using ambient cooling for the entire container. That uses up to 70% less power (Figure 3).

High-density batteries are also a larger safety risk. “When you connect 5,000 75-Ah batteries together in a 40-foot container, you have a very high voltage and high power system in a very small location,” Hong noted. That means using more sophisticated controls and battery management, which can increase costs.

Finally, where you locate a battery determines the environmental protections that are necessary. While containerized BSSs are, for the most part, sealed units that are less subject to weather impacts than other infrastructure, it’s not a matter of just dropping the system where you need it.

David Miller, director of business development for Greensmith Energy Management Systems, which has deployed BSSs across the U.S., noted that containerized enclosures are usually rated NEMA 3R or NEMA 4, depending on the local environmental conditions, but they can be upgraded further. “The range of weather-proofing options allows us to configure the enclosure for a particular environment,” he said. “Common packages that might be included in an enclosure include salinity protection if the system is located near an ocean, or humidity control if the system is located in a humid area. This range of enclosure options allows us to site energy storage in a tremendous range of geographies.”

McDowall explained that the Saft project in Puerto Rico is being hardened against hurricanes, a regular issue in the island territory. That means the three 20-foot containers have to be on solid ground.

“It’s fairly well-established that the container itself is hurricane-proof,” he said, “but the foundations and ancillary equipment have to be adequate.”

Saft has also delivered BSSs to far less tropical environments. Last November, it installed a 950-kWh system for an electrical cooperative in Kotzebue, Alaska, above the Arctic Circle. The battery is equipped with a cold-weather package that allows it to operate at ambient temperatures down to –58F. ■