Port Westward Generating Plant (PWGP) is the newest member of Portland General Electric’s (PGE’s) diverse family of power-producing resources and the company’s first new power plant in more than 10 years. PWGP will help PGE cope with a 2.2%/year load growth rate while reducing its need to buy wholesale power at high spot-market prices. The 400-MW plant began commercial service in June 2007. Because actual operating data were sparse at press time, an inside look at PWGP’s first use of Mitsubishi Heavy Industries’ (MHI’s) G1 advanced gas turbine and combined-cycle technology in the U.S. must suffice for readers considering them.

PWGP (Figure 1) is located in the Port of St. Helens industrial area of Oregon’s Columbia County, near PGE’s 545-MW Beaver Power Plant. Mitsubishi Power Systems (MPS, www.mpshq.com) supplied all of the equipment for PWGP’s 1 x 1 power island: a M501G1 gas turbine, an MHI steam turbine, generators for both units, and a triple-pressure heat-recovery steam generator (HRSG) from Deltak LLC (www.deltak.com) equipped with a selective catalytic reduction (SCR) system driven by CO and ammonia catalysts. Construction of the plant started in January 2005, and the project was finished under budget and just in time to meet PGE’s summer loads. 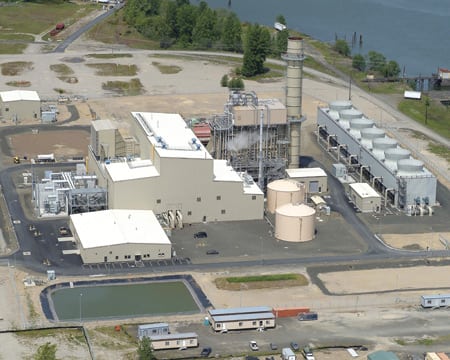 1. Push the button. An aerial shot of Port Westward Generating Plant, taken during its start-up in June 2007. Courtesy: PGE

PWGP is powered by a brand-new G1-class natural gas–fired combustion turbine from MHI and boasts of a combined-cycle efficiency that’s among the highest of any plant in the U.S. The plant’s heat rate of 6,700 Btu/kWh takes into account all plant loads and transformer losses.

PGE’s original permit application for Port Westward called for two F-class gas turbines with a combined capacity of up to 650 MW. But after carefully considering projections of consumer demand and trends in replacement power prices, the utility decided that going with a more-efficient G-class turbine in combined-cycle mode would be a better investment for both its shareholders and customers.

The target capacity of the proposed plant then had to be revised to reflect the use of one G-class machine with higher efficiency in combined-cycle mode. The G-class turbine has a 2% to 3% lower heat rate and about 100 MW more output than the F-class alternative. At average site ambient conditions, PWGP has a maximum capacity of 414 MW, of which 389 MW comes from the combined cycle and the remainder from duct firing.

MPS has a fleet of 18 G-class machines installed worldwide; the earliest entered service in 1997. To minimize operational problems, Mitsubishi thoroughly tested all final design changes incorporated into the G1 unit at PWGP at the company’s verification power plant in Takasago, Japan, prior to releasing the turbine for commercial use in the U.S.

The contracting approach used on the PWGP project was typical. PGE purchased the turbomachinery directly from MPS and signed a full-wrap turnkey contract with Black & Veatch Construction Inc. (www.bv.com/services/construction/) for all other equipment. PGE also negotiated a long-term service agreement with MPS that covers gas turbine parts and planned maintenance inspections for 12 years. This and the contract agreement negotiated with assistance from Troutman Sanders LLP (www.troutmansanders.com), ensures the plant’s ongoing reliability and cost predictability.

G1 technology must be considered evolutionary because many of its turbine components are the same as in a G-class turbine. The biggest differences are found in the details, such as improved turbine Row 1 blades and vanes and Row 2 vanes. Another distinction: The G1 extends steam cooling from the combustor transitions to the blade ring on the first row of the turbine.

The upgraded hardware was installed in Mitsubishi’s verification plant in May 2003. To date, the upgraded unit has accumulated more than 8,000 operating hours and 501 start-stop cycles in daily start-stop dispatching. 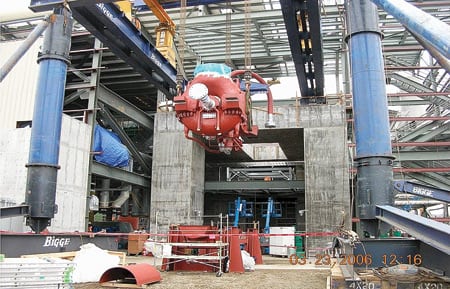 2. Tab A to slot B. The HP-IP steam turbine installation was completed in March 2006. Courtesy: PGE 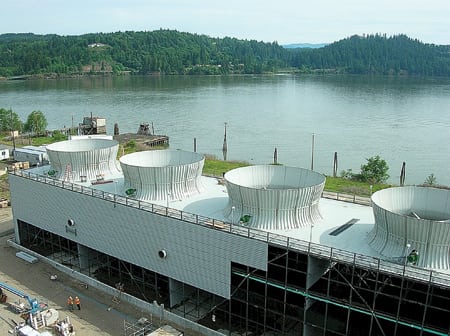 A PlantWeb distributed control system (DCS) equipped with an Ovation expert control system—both from Emerson Process Management (www.emersonprocess.com)—is the brain behind PWGP operations. For its inputs and outputs, the DCS relies on both intelligent Emerson field devices and Fieldbus and Profibus technologies. Their use lowered the costs of installation and startup and is expected to do the same for O&M costs. Profibus and Field Bus facilitate communication with local devices, decrease the amount of field wiring, and increase the amount of information available to the DCS.

PWGP uses a static frequency converter during start-ups, evaporative cooling, and duct firing for power boosts. An auxiliary boiler provides the warm-up and start-up steam required by steam-cooled turbine components and further increases PWGP’s overall efficiency. The duct burner system was sized at 25 MW based on expected operating needs. The duct burners have a minimal effect on balance-of-plant equipment when they are not activated.

The only pollution-control equipment on the "tail pipe" of Port Westward are the SCR and CO systems (Figure 4), which limit emissions of NOx to 2.5 ppm and those of carbon monoxide to 4.9 ppm. Cormetech Inc. (www.cormetech.com) provided the system’s ammonia catalyst; Engelhard Corp. (www.engelhard.com, now part of BASF) supplied its CO catalyst. 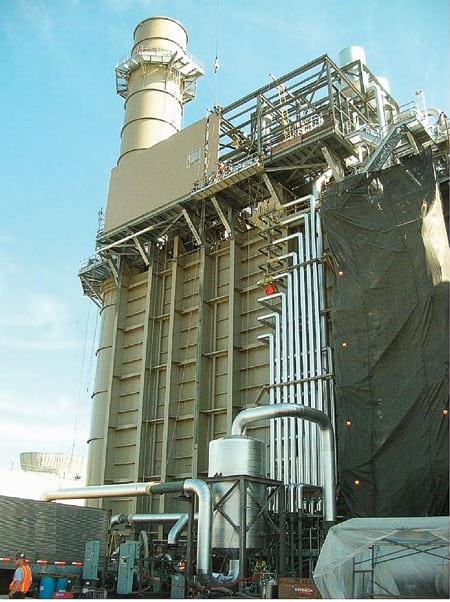 4. Take a deep breath. The shiny ammonia injection pipes reveal the location of the SCR section in the HRSG. Courtesy: PGE

The plant burns natural gas from Sumas, a hub in Washington State through which Canadian natural gas is delivered from the Williams Northwest Pipeline through the Kelso Beaver pipeline to two on-site reciprocating compressors.

As luck would have it, the switchyard that served PGE’s decommissioned Trojan Nuclear Plant was available to serve PWGP. PGE built a single-circuit 230-kV transmission line from Port Westward to Bonneville Power Authority’s Allston Substation, as well as a double-circuit 230-kV transmission line from Allston to Trojan (although only one circuit is operational at present). The line’s location, west of the Cascade Mountains, is attractive because it is close to PGE’s load.

From assembly to final checkout

Equipment delivery to the PWGP site began in September 2005. Although the site enjoys excellent road, rail, and river access, most heavy equipment was delivered by barge. Multi-axle, self-propelled transporters moved the heavier units from the barge to a laydown area. Gantry cranes assembled on-site then lifted the gear and put it in place. The steam turbine’s condenser and its water boxes were moved and installed as one module by a roller/rail system.

During commissioning, several challenges threatened to delay the project schedule:

All damaged parts were replaced in record time and performance/reliability testing was completed on schedule (Figure 5). As part of the commissioning process, the steam piping was hydrolazed to remove rust and scale. This reduced the duration of the first steam blow to less than one week, saving fuel and helping to keep the project on schedule. 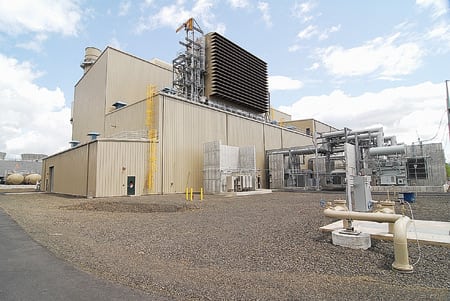 5. Time marches on. Start-up testing commenced in late 2006, and the first firing of the gas turbine occurred in January 2007. Courtesy: PGE

The plant is designed to be operated from a central control room by a staff of 18. The team was brought in six months before first fire to participate in commissioning activities. PWGP has operated flawlessly since entering commercial service this June. The results of a performance test conducted during commissioning exceeded contractual guarantees, and the plant has proven easy to cycle between 50% and 100% load. Another positive outcome has been high ramp rates, which give PGE’s energy traders a big competitive advantage.