Since ratification of the Clean Air Act (CAA) in 1970, U.S. utilities have made steady efforts to install pollution control equipment to curb power plant stack emissions. The CAA Amendments of 1990 raised concerns at the time about the industry’s ability to install a large number of flue gas desulfurization (FGD) systems, or scrubbers, in the short period of time called for. These concerns became moot when many utilities opted to switch to low-sulfur coal, rather than retrofit FGD systems.

The concerns returned in 2005 with passage of the Clean Air Interstate Rule (CAIR) and with realization that many new coal-fired stations will need to be built to satisfy America’s growing electricity demand, which may increase 40% by 2030. Today, we are seeing unprecedented growth in the number of scrubbers being installed at coal-fired plants. Those installations represent both retrofits to existing stations required by CAIR and scrubbers that new plants need to meet increasingly stringent limits on SO 2 emissions. The growth in demand for FGD systems is taking a toll on FGD system suppliers and their sub-system suppliers. Lead times and costs have risen dramatically for key plant components, threatening project schedules and budgets.

Demand for FGD systems is high for several reasons:

The supply side of the FGD market has been constrained in numerous ways, and it has led to the economic and scheduling problems noted above. In particular, there are now significant backlogs in the workloads of FGD suppliers and most of their key sub-suppliers, and of the suppliers of equipment and materials needed to modify plant infrastructure to accommodate an FGD system. Specifically in short supply are large slurry pumps, fiberglass-reinforced plastic (FRP) pipe, ball mills, and chimneys and liners (which are currently booked through mid-2009).

Compounding the problem, the corrosion-resistant alloys commonly used in FGD absorbers are increasing in cost, partially due to rising costs of their chemical constituents. A final fly in the ointment in many regions is the short supply of skilled labor (particularly qualified welders) needed to erect scrubbers and supporting systems.

Demand Is Rising While Supply Is Falling

To meet the timing and emission requirements of CAIR, U.S. utilities have been installing new scrubbers at an unprecedented rate. Between 2007 and 2010, a total of 180 FGD units are projected to enter commercial service. By comparison, during the entire decade of the 1990s there were 14 FGD retrofits in the U.S. If the projection pans out, the number of operating scrubbers will increase six-fold between this year and the end of 2010. The ongoing activity targets about 73,000 MW of coal-fired capacity, including retrofit projects and new plants. In addition, it is projected that scrubbers for another 125,000 MW of capacity will be needed by 2015 to fully comply with CAIR (Figure 1). 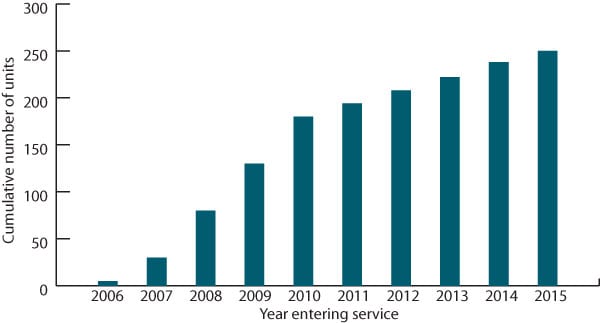 Finally, some coal-fired units must comply either with the New Source Review (NSR) provisions of the CAA and consent decrees, or with the CAVR. Operators of these units have committed to install a scrubber that represents best available control technology (BACT) or best available retrofit technology (BART), respectively. Figure 2 shows the number, expected start-up date, and purpose of FGD systems expected to be installed through 2015. The total peaks in 2010, when 70 units are scheduled to become operational to meet the first phase of the CAIR program. Some of these projects may extend into 2011 if increased equipment lead times and erection contractor backlogs cannot support the planned schedules. 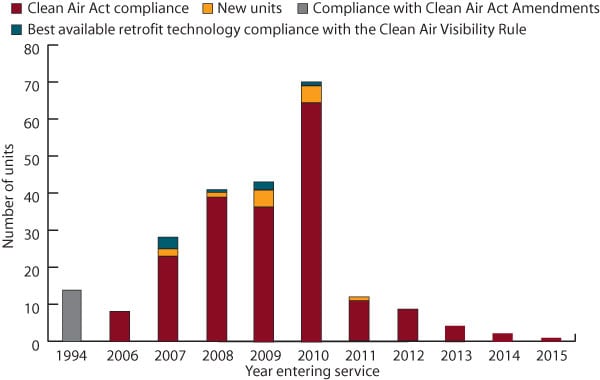 2. The number and purpose of announced FGD systems and their expected start-up date. Source: Sargent & Lundy

The last driver of growth in FGD projects is the price at which SO 2 allowances have been selling. A number of plants have upgraded their existing scrubbers in an effort to bank and/or profit from sales of SO 2 credits under the cap-and-trade system. The going price of an allowance peaked at $1,600/ton in the fourth quarter of 2005. Since then, the value of an allowance has fallen to the current level of $500 to $550/ton.

In light of this precipitous drop, and the EPA’s plan to devalue SO 2 allowances in the future, coal-burning utilities are eager to bank as many of the pre-2010 vintage allowances as possible before their value is decreased. In 2010, the EPA will halve the value of an allowance by making its denominator one-half ton of SO 2, rather than the current one ton. Beginning in 2015, the value of an allowance will be cut further by making its basis one-third ton of SO 2 emissions.

As a result, utilities will have to have twice, and then three times, as many allowances on hand to emit the same amount of the pollutant. Although the price of an allowance at any time in the future is obviously unknown, many utilities expect it to continue falling. They are preparing for the expected drop in value by upgrading their existing scrubbers now, in order to generate more allowances that can be banked or sold. According to some projections, banked allowances may be completely consumed by as early as 2012.

While demand for new, retrofitted, and upgraded scrubbers has grown, the number of suppliers has not increased to meet demand. Although foreign suppliers have helped fill the gap, lead times and schedules from many FGD vendors have increased.

Figure 3 breaks down by technology type (wet or dry) the number of announced new FGD systems expected to be installed by 2015. Figures 4 and 5 show the 2006 market share (based on the number of units backlogged at that time) of suppliers of wet and dry scrubbers, respectively, to the American market. 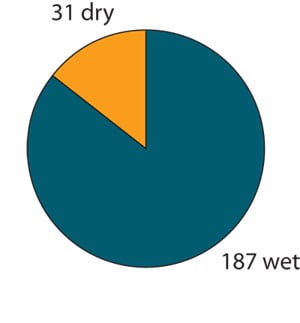 3. A breakdown by technology type of announced FGD projects planned for start-up by 2015. Source: Sargent & Lundy 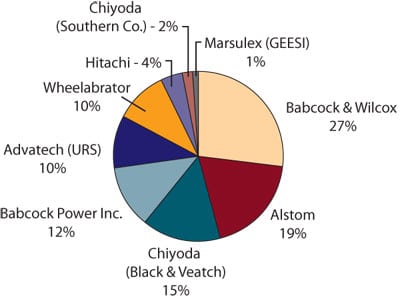 4. Wet FGD suppliers’ market shares (based on the number of units backlogged in 2006). Source: Sargent & Lundy 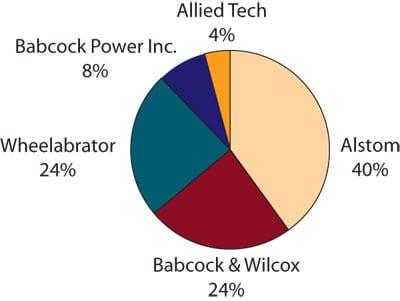 5. Dry FGD suppliers’ market share (based on the number of units backlogged in 2006). Source: Sargent & Lundy

Given their resource constraints, many vendors of FGD systems lately have been declining to respond to some patently profitable utility requests for proposals (RFPs). Some suppliers seem to be focusing their efforts on specific opportunities that complement their preferred scope of supply. For example, single-unit projects are not attracting as much attention as multiple-unit opportunities.

Surprisingly, some recent RFPs for scrubbers have produced only one or two bids (and, in at least one case, no bids), compared with the five or six bids typically generated prior to the recent increase in demand. As expected, bid prices have been increasing on a dollar/kW basis. Some requests for quotes, which are necessary for utility planning and budgeting purposes, have been delayed or declined.

In response to the supply crunch, utilities have had to revise their FGD selection and procurement strategies by:

Deliveries Are Slowing While Costs Are Rising

Over the past three years, concurrent with the increase in backlogs of scrubber suppliers, there has been an increase of as much as 10 months in the lead time required to design and deliver an FGD system. Additionally, there has been a significant increase in the time required for acquisition of materials and fabrication of subcontracted equipment. Both have served to lengthen the schedules of scrubber projects.

As Table 1 shows, various other FGD system components have seen their total lead time lengthen similarly over the past three years. But not all scrubber components have been in increasingly short supply, as Table 2 makes clear.

Table 1. Some FGD system components have seen their total lead time increase over the past three years. . . Source: Sargent & Lundy

Although longer FGD supplier and subcontractor backlogs have been a primary cause of extending project schedules and driving up costs, they have not been the sole cause. Another factor has been the skyrocketing prices of chromium, nickel, and molybdenum — the key metals used to make the corrosion-resistant alloys and stainless steels used in scrubbers — over the past few years (Figures 6, 7, and 8). 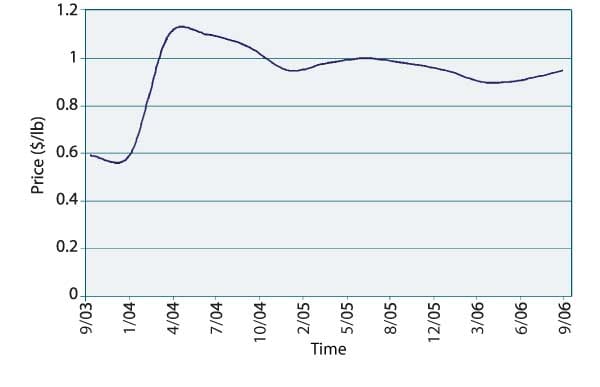 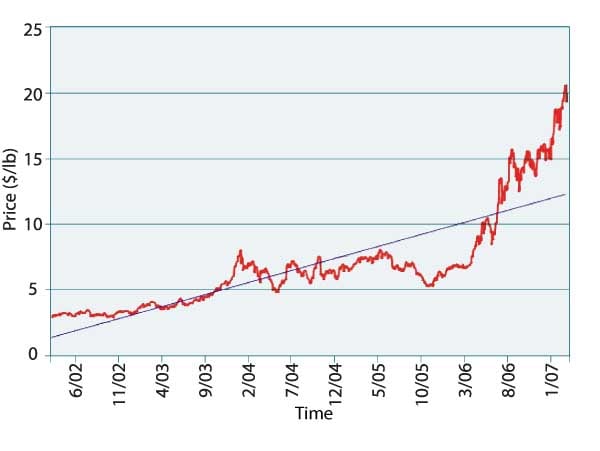 7. The price of nickel has risen even more sharply, tripling between November 2005 and January 2007. Source: InfoMine.com 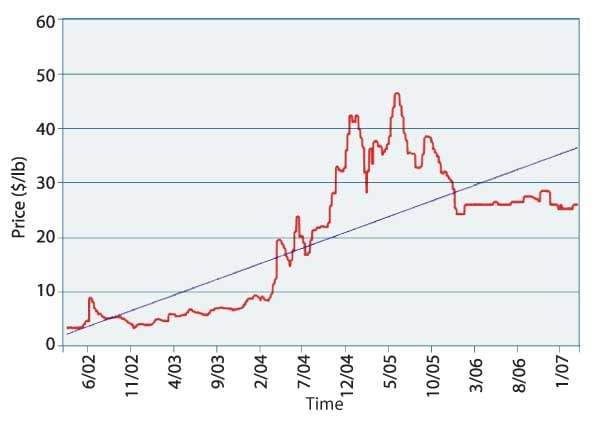 8. Molybdenum prices have been particularly volatile and have risen eight-fold over the past five years. Source: InfoMine.com

As the cost of making alloys and stainless steel has risen, there has been renewed interest in nonmetallic options for absorbers, piping, and chimney liners. Some projects have gone with alternatives such as plastic-resin-lined carbon steel absorbers and tanks, tile-lined concrete absorbers, FRP pipe and chimney liners, and high-density polyethylene pipe. However, the cost of FRP components also has risen, due both to greater demand for them and the higher cost of petroleum-derived resins caused by rising oil prices.

Yet Another Shortage: Workers

Nationwide, demand for construction workers currently exceeds supply. Labor shortages are more pronounced in some areas than in others, such as along the Gulf Coast, where rebuilding following Hurricanes Katrina and Rita is still ongoing. According to recent surveys by the Business Roundtable, more than 60% of contractors surveyed said they were experiencing shortages of skilled labor. Their number has grown over the past five years.

The largest gaps between demand and supply were reported to be for boilermakers/welders, pipefitters/welders, and electricians. The labor shortage is primarily attributed to the wholesale retirement of the baby boom generation (individuals currently 50 to 64 years of age). As older, experienced workers retire, the number of replacements for them is expected to fall short of the level needed. What’s worse, new hires will lack the experience and skills needed to handle the type of heavy industrial construction required to build FGD systems.

Today’s unprecedented demand for FGD systems is constraining supply, increasing costs, and lengthening lead times. Figure 9 shows the combined effects of market factors on the installed costs of projects awarded in 2004, compared with those awarded in 2006. 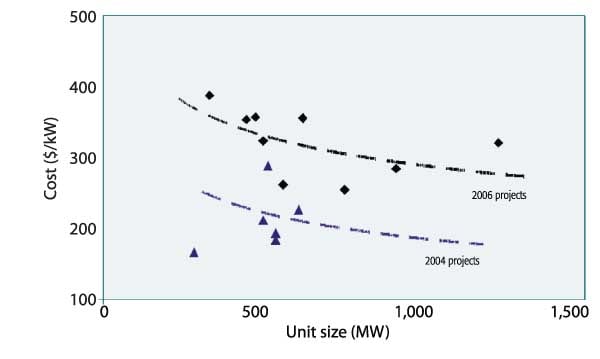 9. The combined effect of supply shortages and higher materials and labor prices on the total installed cost of the flue gas desulfurization systems.

To accommodate changing market conditions without compromising their ability to install needed FGD systems on time and within budgets, coal-burning utilities would be wise to make the following tactics integral parts of their strategic planning: