Like every industry, the power industry has had to do more with less in recent decades. This usually translates into fewer people on staff to maintain operations. Throughout the industry, smaller numbers of engineers and maintenance employees are responsible for ensuring smooth day-to-day performance.

This is one reason why condition monitoring systems and the industrial IoT have been so important. The technology allows a smaller number of people to monitor and maintain a plant. Even this has its limitations, though, because condition monitoring is most typically segmented by machine or even by plant sector. But now, power plants, power generators, power distributors, and all industries with critical systems designated simply as “just can’t fail” can—for the first time—monitor equipment down to the individual bolt. This allows smaller maintenance teams to cover more ground than ever before, getting a sharper, more focused picture of where attention should be paid. 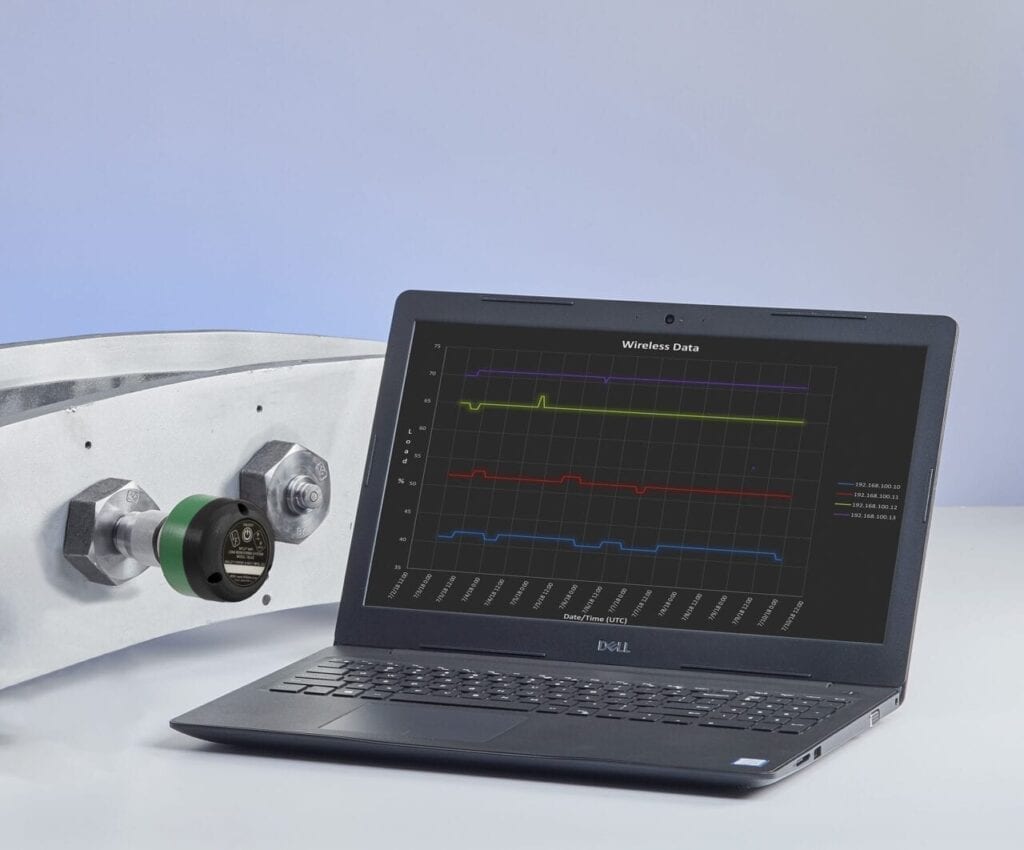 The technology starts with SPC4™ Bolts with Load Indicating Technology from manufacturer Valley Forge & Bolt. It continues with the company’s 702-02 Series Wireless Meters. When these meters are attached to each SPC4™ bolt, they transmit information about bolt tension to condition monitoring systems. Such a simple-sounding idea is a revolution in wireless condition monitoring capabilities.

Here’s how it works. Each SPC4™ bolt contains proprietary technology that measures bolt elongation, as it happens, from inside the bolt. A 702-02 Series Wireless Meter attached to the end of the SPC4™ bolt reads this tension and transmits the information, via Wi-Fi, to the existing condition monitoring system (Valley Forge also offers its own digital dashboard software to plants without an existing condition monitoring system). The information is displayed as a percentage of load.

Using the recorded information within the condition monitoring system, plant engineers, maintenance personnel, and reliability teams gain a powerful tool for tracking machine health and overall plant performance. At a glance, an engineer will know if a bolt is out of tension, to what degree, precisely where it is located, when it happened, and if any other bolts experienced a similar event during the same period. This can help predict emerging problems before breakdowns happen.

Because each SPC4™ bolt can be outfitted with its own wireless meter, maintenance staff also have access to highly localized performance data. Problems with a piece of equipment can now be narrowed down to the bolt, eliminating time spent on exploratory maintenance or root-cause analysis focused on finding the origin of a problem.

SPC4™ Bolts with Wireless Meters are ideal for Balance of Plant (BoP) operations with lower ambient temperatures. Allowing Valley Forge’s wireless technology to monitor these processes frees up engineers and maintenance staff to focus their attention on the primary power generating systems of the plant.

Over time, the trends recorded by the SPC4™ Wireless Meter will form the basis of predictive maintenance routines and scheduled downtime, saving time and money. It will also help equipment and bolts last longer by indicating when re-tensioning is required—well before any breakdowns occur—which can help save on capital expenditures and allow for greater planning regarding equipment upgrades.

Wireless meters can be programmed to take readings as often as four times per second or as infrequently as required. This offers flexibility. Shorter durations can be set and tracked upon bolt installation to allow better understanding of initial tension loss and to schedule re-tensioning. Established bolts can be set for less frequent transmissions to monitor overall machine and process health.

SPC4™ Load Indicating Technology measures the actual tension within the bolted joint, instead of relying on torque-to-tension conversion. SPC4™ measurements are accurate to within +/-5%, a range of just 10%. Torque is a far less accurate +/-25%, a range of 50%.

The readings transmitted by SPC4™ Wireless Meters are the most accurate tension measures for bolted joints available today. The precision of these readings allows for well-informed engineering and maintenance decisions within power gen environments.

It’s also worth noting that SPC4™ bolts are also compatible with the entire range of Valley Forge meters other than the wireless models. So, if there are applications where wireless meters are impractical, SPC4™ bolts can still be used. These other meters include a variety of hand-held models, in which a probe is placed on the end of the SPC4™ bolt for a few seconds to gather tension data that is then displayed via a digital readout on the hand-held unit.

SPC4™ Bolts with Load Indicating Technology and their associated wireless meters are a giant leap forward in condition monitoring capabilities for power plants, as well as other applications. They allow for a granularity of information that’s never been possible before. Plant staff can use this information to make highly informed decisions about maintenance and prevent expensive problems before they occur. Now that there’s a way to monitor plants down to the bolt, there’s no turning back.